After a radio broadcast in which she stated that she would not date a man who did not have a vehicle, the big girl was teased for boarding an okada.

Socialite Doreen Kabareebe of Uganda has become the target of social media mockery after she was spotted comfortably perched on an okada (commercial motorcycle) just hours after she had stated on social media that she will never have anything to do with a man who does not have access to transportation.

A radio interview on Galaxy 100.2FM revealed that the ex-contestant of the Miss Uganda pageant had high-class taste, which she described in an interview with the station. Don't contact Doreen's phone number if you don't have access to a vehicle, she added.

However, after leaving the station, she was seen seated on a commercial motorbike, still in the same gown, with the same hairdo, and wearing the same wristwatch.

She had previously informed her admirers about her time on the radio platform through the use of photographs taken at the studio. 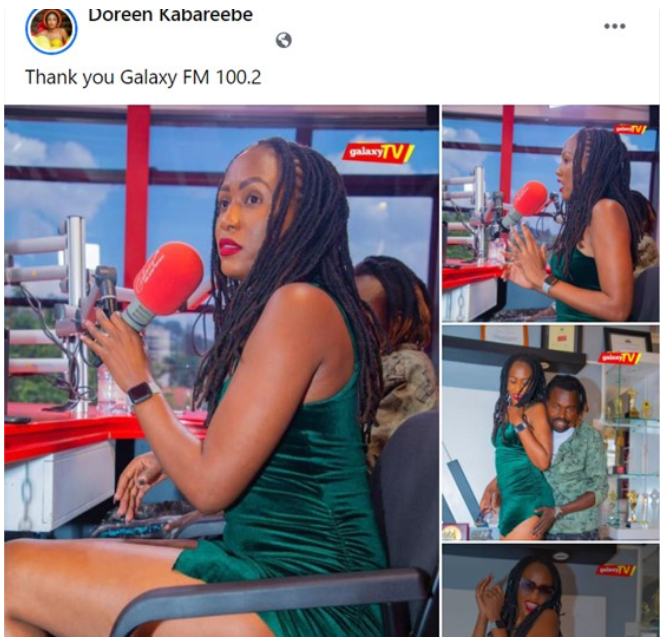 Following her, eagle-eyed onlookers snapped a snapshot of her riding an okada to her destination a little while later. Take a look at the reactions below. 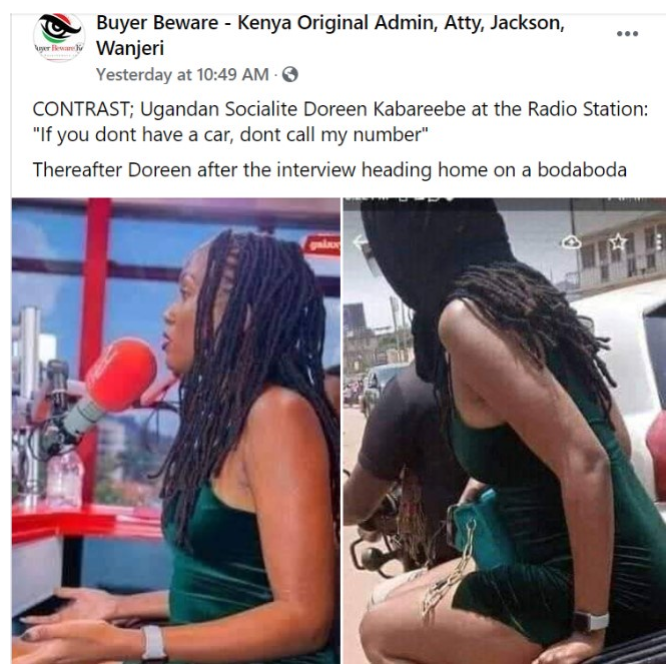 @DomeIndustries; The majority of these girls that express themselves in this manner come from really tough backgrounds. They have never seen anything wonderful and are only now beginning to see the light. It is only silly enthusiasm on their faces, but they have nothing. The reason why owning a car is so valuable to them is as follows. Let's follow the leader's lead!

Poor upbringing, weak morals, and as a result, such people will never realize the worth of hard work. They prefer easy lifestyles but are unwilling to put in the effort. What is my recommendation? Keep a safe distance between yourself and such creatures.

Simple, @mariannakabuye4; Banage, you guys leave the lady who is her standard, and you search for those ladies who don't mind men who don't have vehicles.

@kainesheela; What is it about males that makes them so enraged in the comments? She said what she said for a reason.

@Dennisjuma01; The fact that she need a man who drives implies that she is unable to do it herself!

@AmandaMFWalton; You never know what someone else is going through. Most likely, you're out here missing out on potential soul mates because you're listening to poor advice. a woman shrugs, implying that material goods aren't actually that important. You will not be able to take it with you. With this checklist of erroneous priorities, you're putting a stop to your own pleasure.

@Darkprince6061 stated that she is in no position to negotiate from a position of strength because the commodities/sex she was selling lost value when she turned 40, and if she is unable to obtain a car with a life expectancy of less than 30 years from her commodities, she will most likely die without a car.

@Capt Sylves, Ugandan females aren't beyond getting on a boda once in a while for a change of scenery. When it comes to getting to the hospital, some of our Kenyan sisters here would rather drop and collapse in front of the ambulance rather than ride in one. They would then make a pity call saying "haki I'm in hospital si you come pick me up."

@TenywaDavid15; This is an example of being too cheap! So you believe that a car is everything and represents wealth? Sorry, but you gals need to be more realistic. Find a partner with whom you can settle down and build a bright future, while also assisting you in being the best you can be.