Tiktoker Jabu Nkanyezi is responsible for breaking the hearts of many South Africans. The incident occurred after she uploaded recordings of herself drinking wine while her eye was puffy and making a sound that implied she needed healing due to the pain she had experienced at the hands of others.

After receiving numerous inquiries regarding her blue eye, she decided to film yet another video in which she explains the process by which she attained the color. 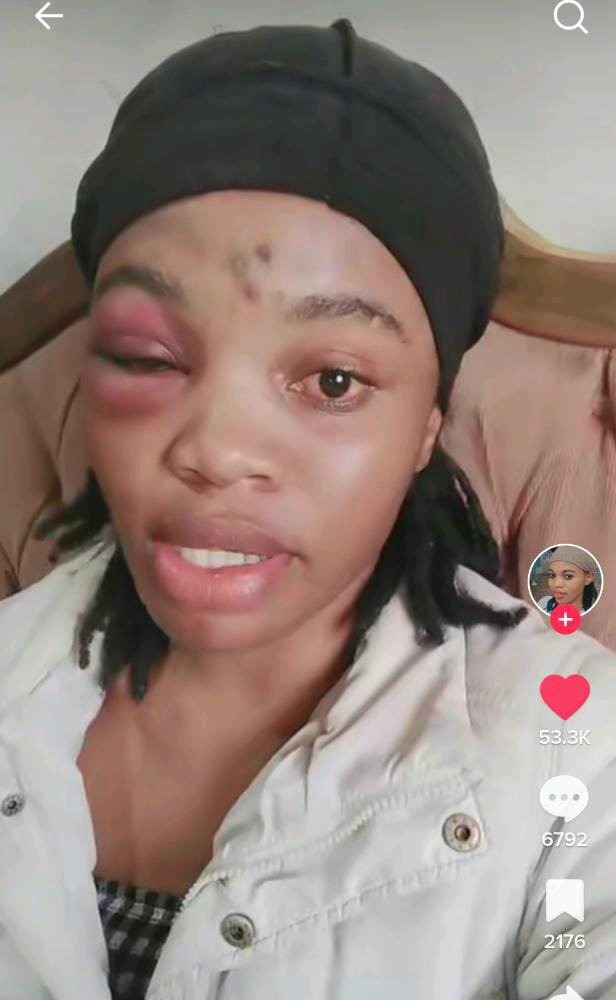 According to the second clip, she has become accustomed to male violence. Her ex-boyfriend, whose family history informed him of her pregnancy, was the first to assault her. She told him she wasn't pregnant, so he took her to the doctor to make sure. On the way home, he beat her mercilessly. She ended up with a broken front teeth because of it.

After much struggle, she was able to leave her violent partner.

It's unfortunate that even the man she dated after him injured her. She said that her ex-residence boyfriend's had been broken into. They tracked down the burglars after learning where the items had been hidden.

When her ex-boyfriend arrived, he ducked under her skirt and said nothing. So after that, it was up to her to urge them to stop. He never defended her when others were rude to her. While returning, she criticized him for not defending her from the thieves who had stolen from them. He also didn't try to confront them, making her the de facto male figure.

Her lover took offense to her insults and left the house to drink them away. After a few drinks gave him the nerve to attack, he punched her in the eyes and otherwise battered her senseless. This is how she wound up with a black eye.

Some Tiktokers believe she made matters worse when she branded him weak. She has moved on from the relationship and is prioritizing herself.

If There Are Alot Of Wall Geckos In Your Home, Here Are Home Remedies To Help Get Rid Of Them

Is This Witchcraft?, See What This Venda Man Found In Mountains That Left People In Disbelief

Below Are The Best Benefits Of Morning Glory