12 Signs Someone Is Secretly Jealous Of You

We all feel amazing when we accomplish certain goals in our lives but some people are quick to put a damper on that happiness.

These are the people who you think are your well-wishers but instead of sharing in your joy, they are jealous of you, and consequently, they say and do cruel things to you.

Jealous people usually suffer from an inferiority complex and tend to covet the things that others have. But jealousy in itself is not unnatural.

We’ve all felt jealous at times but most of us are able to hide it and continue with our lives. However, the same can’t be said for everyone. It’s not easy to handle a jealous person. The following are 12 signs that will enable you to find out if someone around you is jealous. 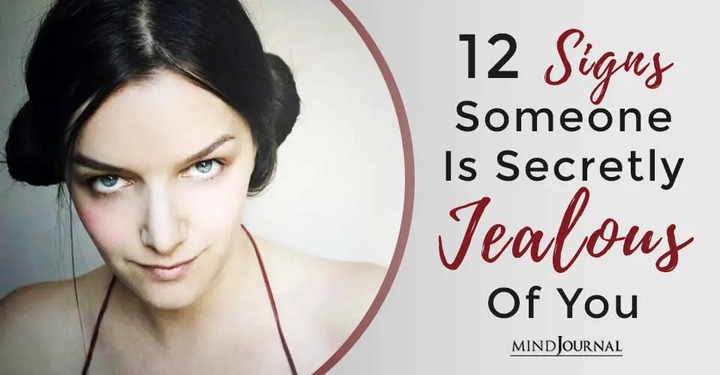 A person who is jealous of your career, your relationships, your clothes and so on, will do their best to be like you, to the point of imitating you. Oscar Wilde said that imitation is the sincerest form of flattery, but most times it is simply irritating when others’ steal your ideas.

But rather than getting angry, it is best to help these people find their own persona. Do your best to teach them that they should be themselves in order to succeed.

A jealous person will make you feel like they’re praising you but the moment your back is turned, they will start making snide remarks about you.

Rather than trying to let go of their jealousy, they’ll just act like they don’t care at all. Do not stoop down to their level. Appreciate them for their success whenever they deserve it.

They will constantly try to disparage your achievements, sometimes going to very cruel lengths to do so.

Remember that there is no point in trying to tell them otherwise because they will just go on doing so. Just be modest and matter of fact about your achievements.

4. They will gloat about your mistakes.

If you make even one mistake or face the smallest loss, a jealous person will be the first to say ‘I told you so’. Even the tiniest of failures on your part will make them feel satisfied and happy.

Don’t let their harsh words affect you. As long as you stick to the right path there is not much they can do stop you from being successful.

5. They are not fair-weather friends.

Usually, you will notice that some people will only stick around for as long as you are successful. If you fail, they’ll run like rats on a sinking ship.

But jealous people are the opposite. If they see that you’re fulfilling your goals, they will slink away. This is because your well-being only increases their jealousy and feelings of insecurity. They will dislike the spotlight being on you so they prefer to leave rather than feel insignificant.

6. You will be their rival in their eyes.

A jealous person will try to start up a rivalry with you because they desire to be better than you and will do anything to show that they are superior.

Don’t allow yourself to be provoked by them. This kind of rivalry is unhealthy and they will not hesitate to use shady tactics to bring you down.

Jealous people will take any opportunity they can find to talk about you behind your back, and they will definitely not be saying good things.

Sometimes they’re downright spiteful and nasty and they won’t even think twice about spreading rumors, even ones they know are false.

Don’t let yourself be affected by their toxic nature. It is best to bring it up with them as soon as you can. Be resolute and earnest when you confront them and you might be able to convince them to stop.

8. Excellent at finding faults with everything you do.

A jealous person will perceive you as an inferior individual who just managed to have some accidental luck. They’ll do their best to make sure you know that by criticizing your every move.

It won’t matter to them that you’ve worked extremely hard or that you are very skilled. They will nit-pick if they have to just to pull you down.

9. They’ll dislike you for no reason.

Through no fault of your own, a jealous person will always detest you. They covet your success and when they can’t have it, they’ll simply hate you for it.

The only way to deal with this is to be civil to them, otherwise, they may do something vindictive.

10. They will try to isolate you from those you are close to.

Jealous people will try their hardest to damage your connections with those you hold dear. They will try to ensure that you have no support system to fall back on so that they can easily destroy you later.

And so, they will go behind your back to ruin your relationships, familial or romantic or even just friendly.

11. They will now show their true colors.

A jealous person will never be upfront about their feelings regarding you. They prefer to plaster on a fake smile and will act like they’re actually sharing your happiness and wishing the very best for you.

﻿12. Sabotage you through their advice.

A jealous person’s conscience will not prick them when they’re trying to find ways to pull you down. This might mean them giving you the worst advice possible so that you’ll definitely end up failing.

Be very careful because they will work very hard to ensure that you listen to them so that you get hurt in the end. Handling jealousy in others can be very difficult but it is not impossible. Just remember that their jealousy just stems from their insecurity and lack of confidence.

Letting them know that they have hurt you will only make them happy so just remain calm and try to guide them back to the right path.