Check Out; Man Get Caught Beating His Girlfriend After She Rejected His Marriage Proposal In Public

Check Out; Man Get Caught Beating His Girlfriend After She Rejected His Marriage Proposal In Public

Mzansi is still hicked after a Nigerian was caught beating up his girlfriend in public after she refused to his marriage proposal. Mzansi could not help but to wonder the kind of man he will be after they got married. 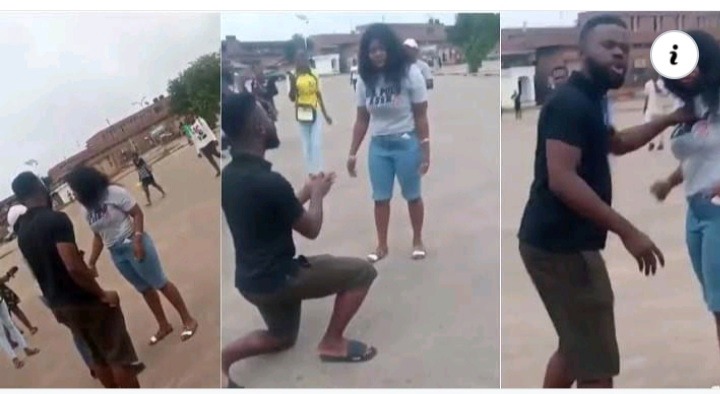 He has shown us the reason his girlfriend rejected his proposal no need asking the girl why she refused who go Dey for abusive relationship come stupidly fall into abusive marriage all in the name of love. Na by force.

She made a nice choice cos this the way you will be beating her even after marriage. The video of him attacking the girlfriend was seen circulating in social media where the man was seen kneeling down trying to propose when the girlfriend turned his proposal.

According to the video which was circulating the man was seen asking his girlfriend “will you marry?” and the lady responded saying ‘no, I don’t want to marry you” while others were saying to her to say “yes”.

She added thaybshe can’t accept his proposal, and she don’t want to marry him knowing when he is. Apparently the man got furious and angry after hearing the respond of a lady whom he thought and hoping she will say yes. This proves that not everyone would say yes knowing very well that loving a person it means death.

According to the source it is said thatbthe man pulled her close to him and start beating her and even removing the weave she was wearing in her head. The man did not accept the defeat no wonder he started hitting her in public. Th man keeps on beating her while saying, “after everything.”

Mean need to know how to handle their anger management. They cannot win woman's heart while they have tendency of beating woman. Women's is no object of any man but the object of God. If we still have such man who are crucial and abusive need to be stopped. They need quick help.

The lesson of the day is that the young man has anger management and which has cost him from losing someone he loves. It doesn't matter how much you love her but as long as you raise hands on her the woman will leave you regardless the circumstances.