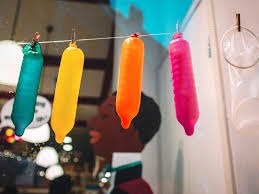 Your health teacher wasnt lying to you, Theres plenty of sperm in pre-ejaculation,says Lauren Streicher, MD, Associate Clinical Professor of Obstetrics and Gynecology at Northwestern University, and author of Sex Rx: Hormones, Health and Your Best Sex Ever ($14; amazon.com). So even if he doesnt ejaculate, you are still at risk of both pregnancy and a sexually transmitted infection. In other words: quit procrastinating. As soon as you are ready to get going, grab a condom.

8. Forgetting to check for damages

About 83% of women and 75% of men failed to check condomsÂ before use in an Indiana University review of studies. We get it”in the heat of the moment, you aren't thinking about much more than getting that condom on as quickly as possible. But before you assume that rubber is ready for action, take a beat to make sure the wrapper doesnt look worn out and the condom isn't sticky, brittle, discolored, or damaged. Also, if it expired back your college days, it's time to trade up toÂ a fresh box.

While it may seem pretty self-explanatory, there are plenty of ways to mess up the simple act of putting on a condom. So here is a quick throwback to the banana lesson: After unwrapping the condom and checking that its not inside out, place the rolled tip on top of the penis. Then unroll it to completely cover the shaft. If you only bother going halfway down, you ll be exposed to way more skin, putting you at risk of contracting (or transmitting) an STD. Also, while putting it on, pinch out excess air inside the condom and make sure you leave half an inch of space at the tip where semen can collect, reminds Dr. Streicher.

If one condom is great at preventing pregnancy and STDs, then two condoms should be even better, right? Definitely not. More is not merrier in this case. Layering two condoms can dramatically increase the chance of slipping off, especially if you are using a lubricated type, explains Dr. Streicher. If the first condom rolls off, then it usually takes the second one with it.

6. Taking it off too soon

Just like waiting too long to put the condom on is problematic, so is taking it off too early. Yet, researchers from Indiana University found between 13.6% and 44.7% of individuals removed the condom before intercourse was over. Of course, pulling off protection puts you at risk of both STDs and pregnancy. So instead of giving up on a condom before you have reached the final act, consider trying out different kinds to figure out which one works best for you and your partner.

Condoms arenâ€™t a one-size-fits-all deal, and letâ face it, not every man is an XL (sorry, fellas). There are always that guy who buys the extra-gigantic condom, when hes not,says Dr. Streicher. When it comes to staying safe, its important to be realistic about size. If the condom is too small, it could break. If it's too large, it could slip off during sex. The most important thing is not to focus on stroking your guy ego, but rather finding a condom that actually fits properly.

You can't get pregnant from oral sex, but you can still get an STD, says Dr. Streicher, which means you've still got to wrap it up. And here a trick they probably didn't teach you in health class: women can use condoms when receiving oral as well. â€œSince no one ever uses dental dams, instead, take a condom and cut the tip off, instructs Dr. Streicher. This will give you a square to put over your vulva for protection. If you decide to try out this tip (no pun intended), make sure you use an un-lubricated condom; otherwise the barrier will fly right off.

Speaking of which, lube can be a great addition to your condom experience. Not only can it make sex more enjoyable, but it also helps prevent the latex from tearing or ripping. However, if you choose the wrong lubricant, it could spell disaster.Not all lubricants are condom-compatible, says Dr. Streicher. Any oil-based product can cause break-down of condoms. You always want to stick with water-based or silicone-based, or a mixture of both.

You were told in high school health class not to store condoms in your wallet. Well, that wasn just a myth to scare you into celibacy. All the bending and friction can cause tiny holes, rendering the rubberÂ totally useless, and if you keep your wallet in your pocket, your body heat can also degrade the sheath. Instead, make sure you keep condoms in a cool, dry place away from sunlight or heat.

1. Not usingÂ one at all

You already know you need to be using condoms, but the advice is worth repeating: Any time there are skin-to-skin contact, you should really use a condom,says Dr. Streicher. Educate yourself on the nine types of condoms, and stock up.