By Warrior_writes (self media writer) | 2 months ago

A Wedding Fit for a Businessman's Daughter Takes Place in Nairobi, and a Helicopter Showers the Bride with Rose Petals 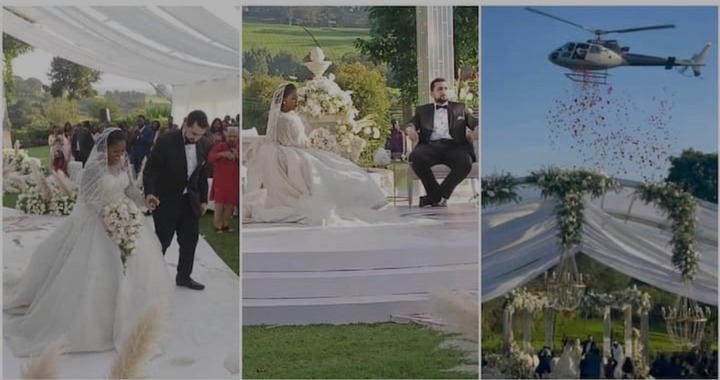 The political figure and business magnate Bibi Ali of South Sudan gave his daughter a lavish wedding, complete with a helicopter that showered the newlyweds in rose petals as one of the key highlights of the day.

People who viewed the wedding on various online platforms could not help but desire that something similar occurred to them as well after seeing it.

The wedding of South Sudanese politician Bibi Ali's daughter was unlike any other wedding because, as part of the celebrations, a large helicopter scattered petals all over the area where the ceremony was held.

The extravagant wedding was held in Kenya, and many people were green with envy because they described it as their dream wedding and said that they could only wish for such beauty and class at their own weddings as well. Kenya was the location of the wedding. "Congratulations, my sweet yala, this is very stunning." I beg you, Nas Juba girls, if your wedding is not like this, with a helicopter dropping roses, please don't post it because we won't comment on it. As far as I'm concerned, this is the most beautiful wedding that has taken place recently; the others are more traditional. Grace Bismarck is quoted as saying.

Presented with a delightful concert In the evening, the two and their friends were given a number of special treats, including a magnificent concert at which they danced until they could dance no more.

When compared to the widespread poverty in the country, the lavishness of the wedding and the amount of money spent on it failed to impress some attendees, as reported on the website www.mywedding.co.ug. When images of the wedding were circulated on social media, several of Ali's fellow citizens displayed hatred and resentment toward the newlyweds.

So, what action should we take? Tell him that children living on the streets in Juba are starving to death," Alazi Brenda remarked. "He is a Member of Parliament who represents his Constituency as the People's Voice, but the people who voted for him are going hungry to their deaths." "He could have bought 2,000 bags of sorghum to distribute to vulnerable communities in his village would have made a great change in their lives than having such an expensive wedding," Nyanabun Mawien Kok commented. "It would have made a greater impact on their lives than having such an expensive wedding." Make false accusations against the lady. On the day of her wedding, there were also some who threw doubt on the woman who was getting married. The Governor of Gemenze's response was that it was a "waste of recourse as if she will not cheat on him."