By 1NewsAfrica (self media writer) | 19 days ago 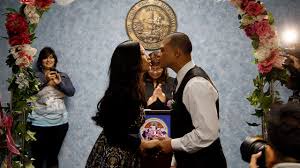 People who marry two wives on the same day or who marry two husbands on the same day are not widespread in contemporary communities, but they do exist. Even if it is difficult to comprehend why these individuals choose to be in a relationship with two partners at the same time, I am confident that they gave it careful consideration before proceeding.

In fact, many of these individuals do not appear to be embarrassed by their behavior, and they appear to take great pleasure in informing others that they are in love with two people at the same time, according to the media. People who were married to two partners at the same time are listed in the following section, including both males and females.

Brisbane is a woman from the United States of America who is married to two guys and has a child with one of them. Although it is unclear when this woman met and married these two guys, her story became public after she took to social media in September 2020 to declare that she is married to two men and even posted pictures of them on the internet to demonstrate her marital status.

According to Brisbane, she has had a more rewarding experience with two spouses than she has had with a single spouse.

Sodiq, a Nigerian guy, was said to have married both of his wives on the same day in Abuja, Nigeria, around April 2021, according to reports. Sodiq, who was just 37 years old at the time of the marriage, fell in love with both ladies and was unable to select which one he should marry. As a result, he decided to tie the knot with both women on the same day.

Kenya is originally from Detroit, a city in the state of Michigan, which is a well-known state in the United States of America. The revelation that Kenya is married to two different men, and that she is living with both of them in the same house, catapulted her into the public spotlight.

Kenya's story first surfaced on social media in August 2020, when she turned to the platform to inform the public about her extramarital marriage with another man. Kenya also said that she has already had children with both of her husbands and that they are all getting along great.

Ekpe Akpove is the fourth member of the group.

This Deltan man is a farmer, according to the information acquired about his life narrative. He opted to tie the knot with both ladies in 2021 just for the purpose of making his relationship with both women legitimate.