‘Don’t come back, they’ll kill you for being gay’

For years Mohamed's family tried to make him more like other boys - tougher, more "masculine". They even sent him to have a female spirit driven out with hallucinogenic drugs. Eventually, writes Layla Mahmood, they decided to kill him.

The heat enveloped 20-year-old Mohamed, as he zig-zagged through the alleyways of Hargeisa. It was around noon, during the summer of 2019. The city was asleep for the daily siesta - shops, restaurants and offices were all closed - so it was a perfect time for anyone who needed to move around under the radar. Mohamed was secretly visiting his boyfriend, Ahmed, an act punishable by imprisonment and sometimes death in Somaliland.

Hargeisa is the capital of the self-declared state of Somaliland, which broke away from Somalia nearly 30 years ago. The courts enforce Islamic law, Sharia, which deems homosexuality illegal, so LGBT+ Somalis must conceal their sexuality. They live in fear of being exposed. For Mohamed, who says he is quite feminine, it was harder to pass as straight than for some others.

Mohamed and Ahmed began their usual romantic encounter behind closed doors, when, to their surprise, Ahmed's sister unexpectedly entered the room. She began yelling, waking up the whole house. Within minutes Mohamed was out of the door and hiding at a friend's home, where he received a chilling phone call from a well-wisher: "Don't come back home, they are preparing to kill you."

"The first time I realised there was something confusing about my sexuality, the desire, the genders that I like and don't like was when I was four or five years old," Mohamed says.

When he was young he shared a room with his older brothers and male cousins. They would discuss girls at night during pillow talk, and then pointedly ask him, "So what's your favourite part of a girl's body?"

"It was then that I knew I was different," he says.

Mohamed gravitated towards makeup and beauty, preferring to spend time with his sisters rather than his brothers. He would often try on their dresses, and after being caught for the third time, his mother felt that she had to do something.

"He told me that I am making God angry. He's cursing you. He's planning for you to go to hell in the afterlife," Mohamed says.

"I was 10 years old, I couldn't take it. I used to wake up in the middle of the night in a sweat screaming: 'Oh help me! Help me from God, he's burning me in hell!'"

For a while Mohamed attempted to satisfy his family's wish to behave more like other boys.

"But at the end of the day, I cannot stop something that I like," Mohamed says. "And I was young. When people are young they forget things quickly."

Finally, when Mohamed was 12, his mother sent him to a "rehabilitation centre".

Institutions designed to reform children, teenagers and young adults who are judged to have strayed from Somali values are scattered throughout Hargeisa, and the rest of Somaliland and Somalia. People are often held in them against their will in harsh and abusive conditions. According to Mohamed, in many cases they are run by scammers,who distort Islamic scripture for financial gain.

Mohamed's family believed that his effeminate behaviour was a result of being possessed by a female jinn, or evil spirit, so the staff claimed they would drive it out. They called themselves "life savers", arguing that they were saving their patients from hell.

"I think it's the worst place that ever existed,'' Mohamed says.

Mohamed was schooled every day on how to behave like a traditional man. They taught him how to walk and talk, and forced him to play football with the other patients - something he would always avoid if he could.

This was accompanied by daily readings of Islamic texts.

"They used to rape me at midnight, and sometimes came in groups," Mohamed remembers.

Rape was common in the centre, and was committed both by patients and by staff, he says.

Everyone was crammed together in a large hall with sleeping bags, with ages ranging from 10 to 30. There was no protection. The staff preached one thing during the day and did the complete opposite at night.

"They are doing these things because they know that we will never tell anyone," he says.

To drive out the jinn, patients were sometimes given a herbal drug called harmala. Similar to ayahuasca, it induces hallucinations and vomiting with the promise of spiritual enlightenment and cleansing. But it has been reported that the quantities given in rehabilitation centres often far exceed safe doses, making them lethal - particularly for children.

boy in rehab centre with cup of harmala

"The only thing that I remember is that I was flying in some place that is full of stars… I don't know what happened during those days. I don't know if I got raped. I just don't know anything," Mohamed says.

The last time he was given harmala, he came round in hospital. He says he has had stomach pains ever since.

After being released from the centre, Mohamed learned to hide his sexual orientation for most of his teenage years. But that changed when he met Ahmed on a secret online chat group for gay Somalis. They found solace with each other behind closed doors. 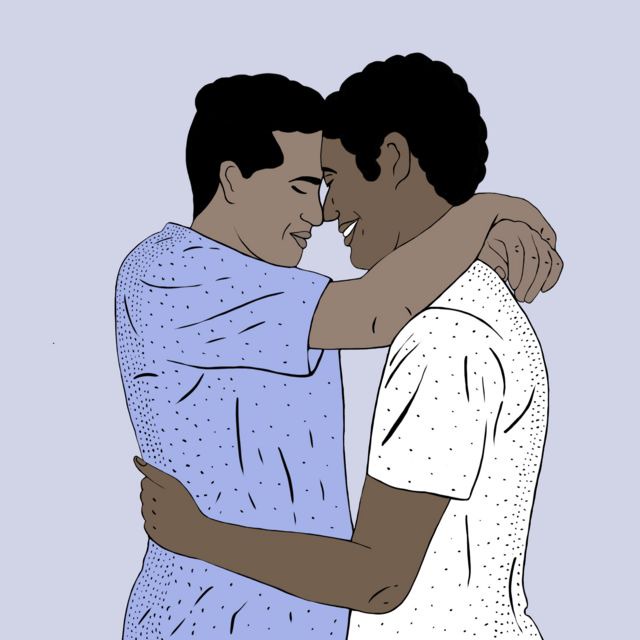 After Mohamed fled from Ahmed's house and learned that his family was preparing to kill him, he made urgent plans to flee.

Most countries will not grant Somalis visas unless they fulfil a set of almost impossible standards, for example having tens of thousands of dollars in a bank account. For those who live in Somaliland it is even more difficult, as only a few countries - Ethiopia, Djibouti, Kenya and South Africa, for example - recognise the Somaliland passport.

There is little option but to spend thousands of dollars on the black market buying counterfeit passports, fake yellow fever vaccination certificates and often visas too.

This was how Mohamed escaped. A helper obtained the necessary documents within a couple of days, giving him instructions to meet a fixer in front of Hargeisa airport. He collected them on the day of departure - three days after Ahmed's sister had burst in and raised the alarm - and then he was off. It was his first time flying in a plane. "It was surreal. I couldn't stop looking out the window," he remembers.

His destination was Malaysia, because tourist visas are free on arrival.

But life as a Somali asylum seeker in Malaysia is tough - and there too homosexuality is illegal.

While most asylum seekers live in limbo for years before being recognised as a refugee, Mohamed's case was fast-tracked and he has been accepted for resettlement. It could be another year before this happens, though. In the meantime, Mohamed's financial situation is insecure; as Malaysia is not a signatory of the Geneva Convention he does not have the right to support himself by working.

There is also the worry that his family might find him, force him to return to Hargeisa, and murder him. He cannot fully trust other Somali refugees and asylum seekers in Malaysia, in case they give him away.

"There is a hope in me that someday I can go somewhere else - maybe Europe, maybe America," Mohamed says.

"Until then, I try to keep a low profile, and pray my family does not find me."