It’s fair to say that brides and grooms worldwide have different styles, tastes, and distinct ideas of what their wedding photos should look like. While some people prefer a nice, tasteful approach to their wedding photos others like to think outside of the box and do something that nobody has ever seen before. We're not saying we don't love creativity - we do! But we think that the people on this list should've checked with friends and family before charging ahead with these photos. Get ready for some of the strangest, most inappropriate, and hilarious wedding photos on the internet! So scroll down to have a good laugh!

1. A Picture of Their Watermelon Addiction

We're off to a great start with this one. As a way of demonstrating the groom's passion for a juicy watermelon, this couple decided it would be a great idea to include some delicious watermelons in some of their wedding photos.

The bride's positioning of her watermelon demonstrates how improper the photo's meaning is. 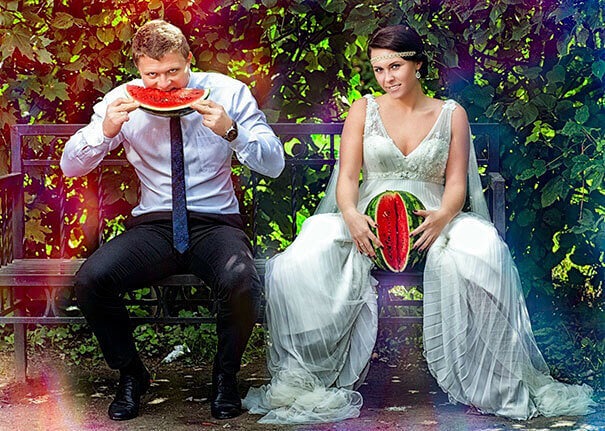 2. The (Not-So-Perfect) Portrait of a Family

We're not sure if this family portrait depicts how this family is in real life or if they wanted to share a picture of how they wish they were.

In any case, the situation is quite awkward, with the mother resting on the floor with a couple bottles of booze and the rest of the group standing awkwardly in the background while posing for the shot. 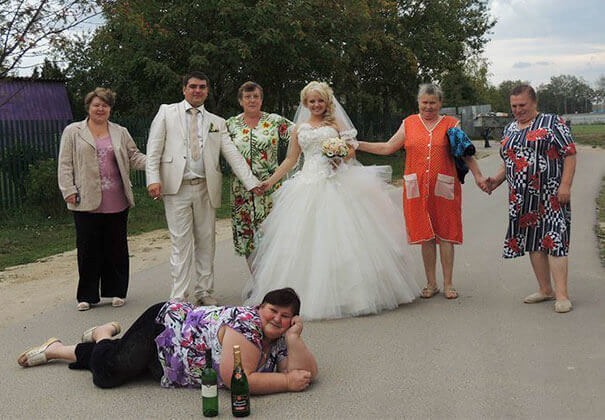 3. Didn't your mother warn you about playing with your food?

We've all heard of the tradition of some brides and grooms releasing doves on their wedding day. The only thing that distinguishes that concept from this image is that this bride and groom are "releasing" dead doves, or whatever the case may be. 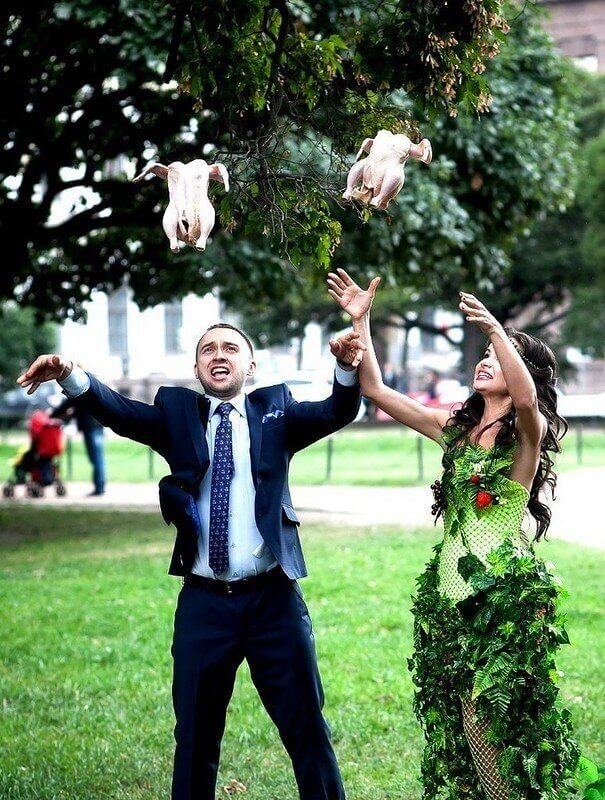 4. For All Bread Lovers Around The Globe

We have no idea what is going on in this image. The bride is clearly asserting her authority, but she may be taking the phrase "the road to a man's heart is through his stomach" a little too literally.

For All Bread Lovers Around The Globe

Although the shot was obviously Photoshopped, the bride and groom certainly poured some emotion into the overall atmosphere of the image. 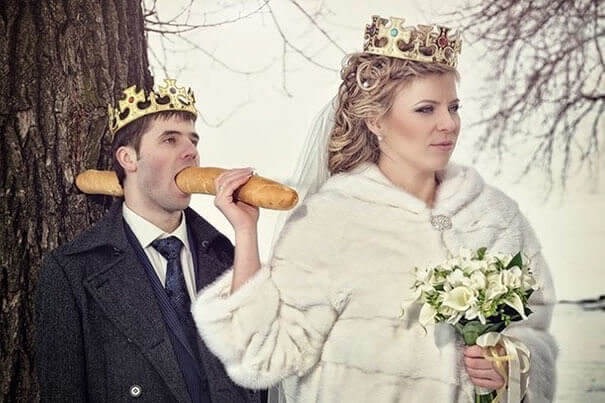 This bride appears to be "overjoyed" with her family's lavish wedding celebration. We don't know who the guy playing the instrument is, but he's not the groom.

Is it time to return home?

Because everything is strewn about, the party appears to have already taken place, and all of the guests have left. At the very least, we hope that her marriage is looking up. 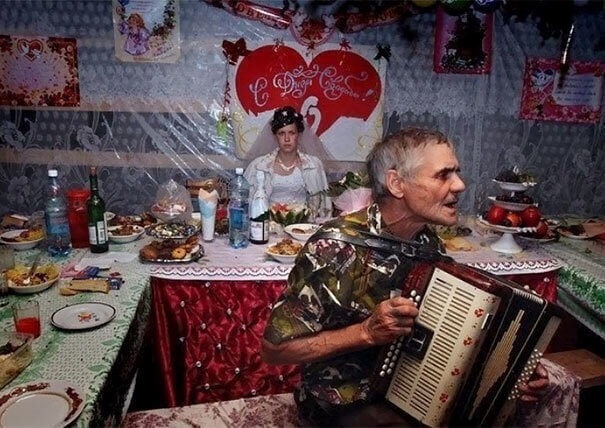 6. When You Want A Pirate Wedding But Don't Have Enough Money For Gold Teeth

This wedding photo transports us to another era, when taking embarrassing photos like this was practically a sport. The pair is seen here eagerly biting their wedding bands, but depending on the angle, it may appear that one or both of their teeth are gone.

Overall, the concept was well-intentioned, but it just didn't work out. 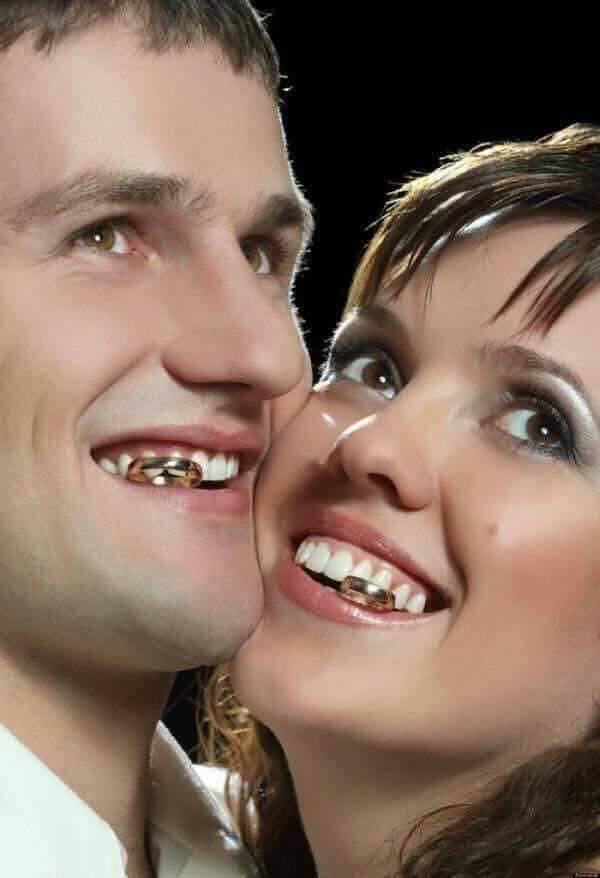 7. At the bottom of this bottle, she discovered her love.

There is no doubt in this world that some people utilize their imagination to create the most unique wedding photographs ever. This pair went to great lengths to produce a portrait of the groom dressed as a genie, with his bride holding the bottle from which he is emerging.

However, none of them appear to be overjoyed about it, which further adds to the awkwardness. 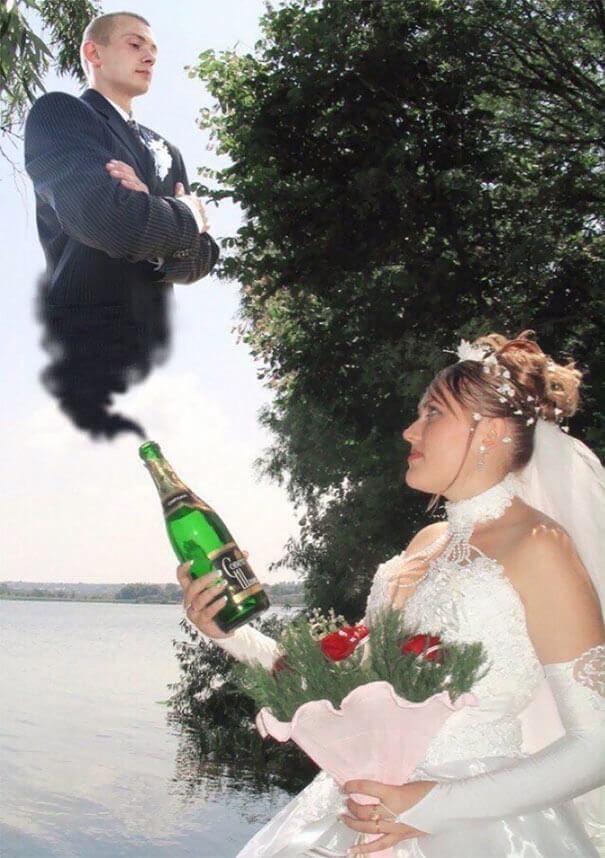 There's no way all of the people in this photo, including all of the bridesmaids, felt it was a good idea to pose in the bathtub together.

While they all appear to be cheerful and at ease in this awkward shot, it's amazing how many women were able to fit in the bathtub and agree to pose for such an unusual photograph. 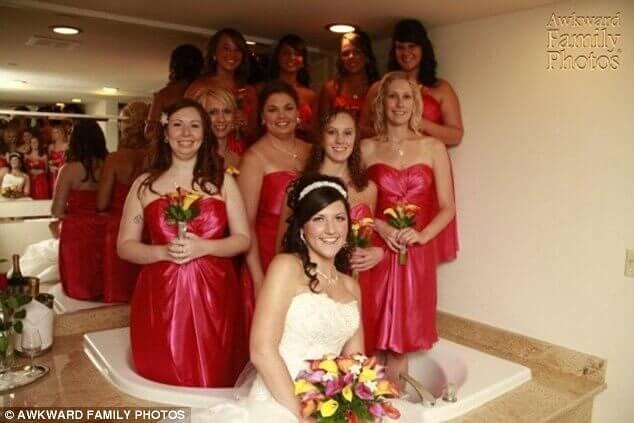 9. When You Want To Be The "Attention Centaur"

The idea of being a centaur is obviously appealing to these two lovers, therefore their wedding day was the ideal opportunity to make that dream a reality.

Rather than taking a few clichéd and romantic beach images, they decided to add some spice to their photos by photoshopping a horse image onto their bodies. At the very least, they were honest with themselves. 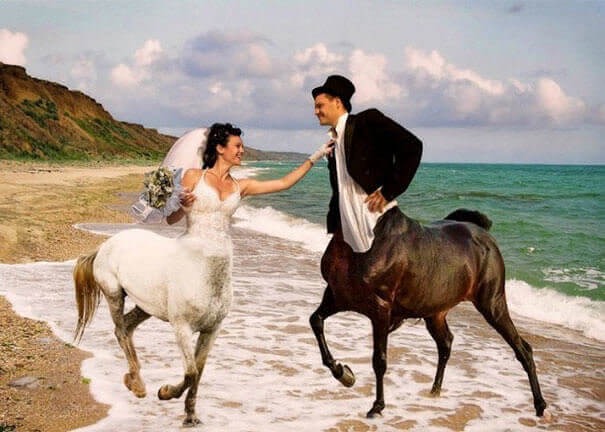 Keeping The Magic Alive, No. 10

The truth is that it's hard to determine what the bride and groom in this photo had in mind unless you're familiar with local wedding traditions and customs.

As they both stare into the camera, the groom sits on his joyful wife and appears to tug her hair. We can only remark that the entire edit is odd and makes us feel uneasy. 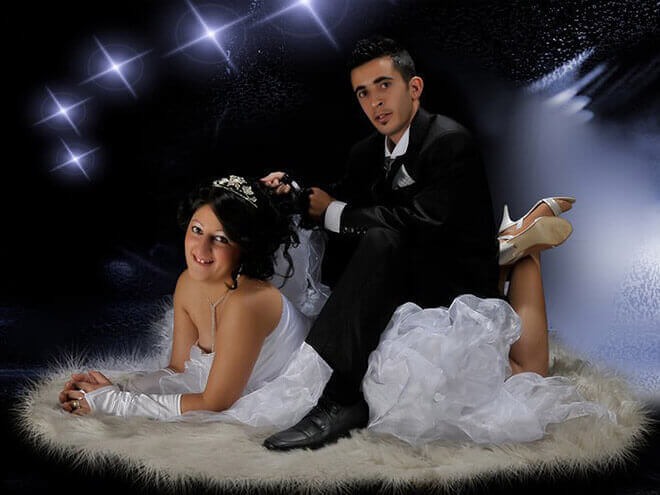 Men Only Stokvel Leaves Mzansi Speechless:See what they bought/ Opinion