What are some common organisms that most people don't even know exist?

By Jackson46M (self media writer) | 1 month ago

What are some common organisms that most people don't even know exist?

Rove beetles. It’s hard to even explain how ubiquitous these insects are; they are found in just about every habitable corner of every continent in the world, including Antarctica. There are a staggering 63,600 species, making the rove beetle group (Staphylinidae) the most diverse taxonomic family of organisms in existence.

Despite their abundance, I’d wager that most people haven’t heard of them. That wouldn’t be much of a shame if they were just dull bugs, but rove beetles are one of the most interesting insect groups out there. Hopefully, by the end of this answer, you’ll love them as much as I do.

The defining characteristic of rove beetles are their very short elytra, or wing-cases. In beetles, elytra (singular elytron) are hardened wings reinforced with chitin, which protect the paper-thin flying wings below. Most species’ elytra reach all the way towards the tip of the abdomen, but rove beetles’ are half this length.

How, then, do the wings fit underneath? They are in fact folded up, origami-style, so that they unfurl to full length when the elytra are lifted. They can then be tucked in again by an intricate sequence of asymmetrical folds. This amazing design is being researched 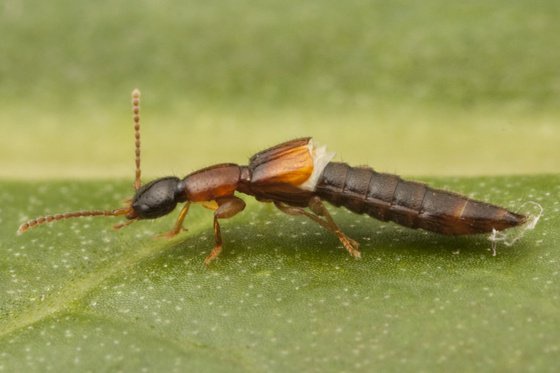 You can watch the process in beautiful detail in this video.

Now, I’m going to talk about the incredible genus Stenus. Like the family it belongs to, it’s record-breakingly diverse: it contains more known species than any other animal genus, at 3,000. Most are specialized predators of springtails (little six-legged arthropods which aren’t quite insects, but closely related).

To catch these springtails, they employ a frightening weapon. The labium (an insect mouthpart, sort of like their lower lip) is shaped like a harpoon, and the beetle inflates it with blood to make it shoot out in a matter of milliseconds. The end of the rod is tipped with sticky pads, which can grab prey from up to half a body-length away.

In other words, they’re like the chameleons of the insect world.

Stenus beetles’ main method of defence is just as unique as their main method of attack. They mainly live on and around water, as they’re light and leggy enough not to break the surface of the water. This in itself isn’t unusual for an insect - many arthropods, even some reptiles and Jesus can walk on water.

However, when Stenus species are threatened, glands in their abdomen squirt out a substance called stenusin - a compound produced exclusively by, and named after, them. It has exceptionally low surface tension, meaning it’s hydrophobic - it repels water. Instead of mixing with the water, it spreads over the top of it, allowing the beetle to slide away at breakneck speed. 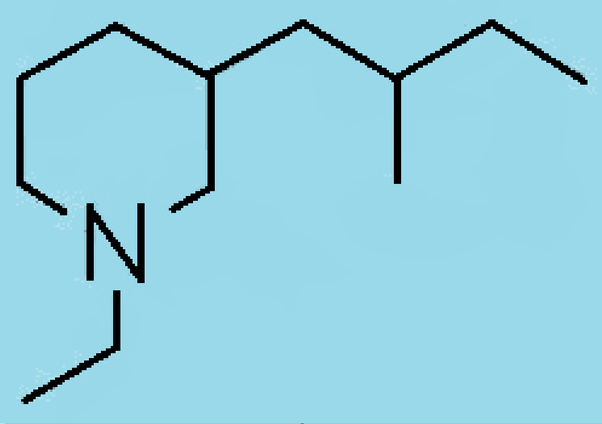 This escape maneuver is so lightning-fast that it’s never been photographed or filmed, to my knowledge. Instead, have the above diagram of a stenusin molecule.

Stenus rove beetles tend to be fairly consistent in colour, with most species being black or reddish-brown. Other genera, however, are much, much more colourful. Many species have iridiscent, rainbow-like exoskeletons: 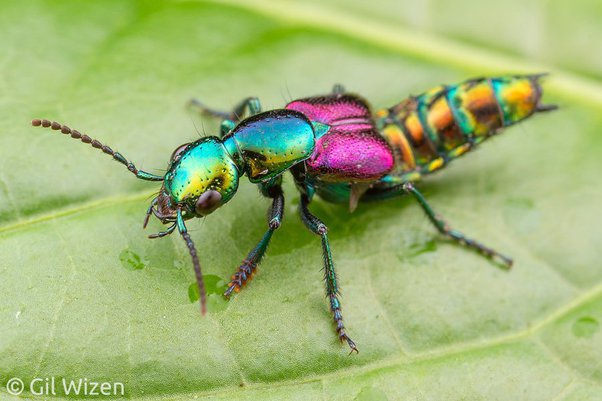 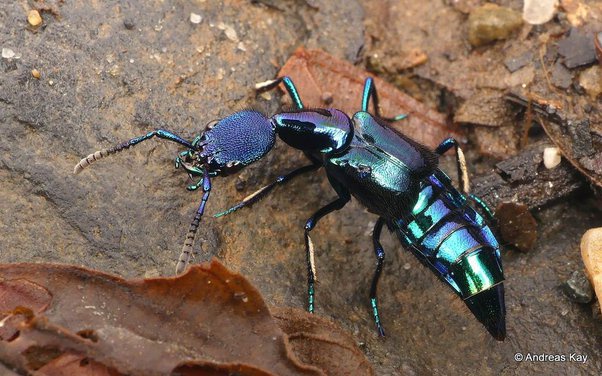 One species, Emus hirtus, has even evolved to mimic the more dangerous bumble bee: 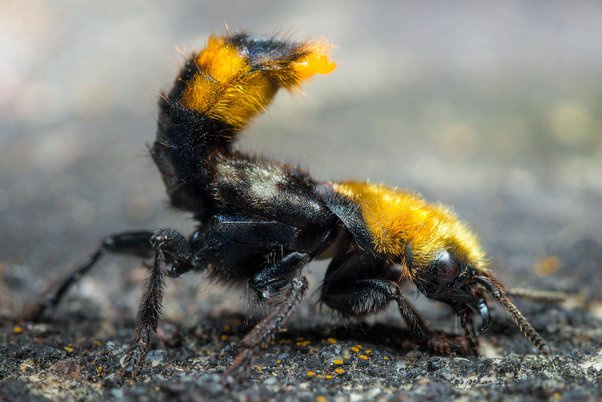 Another, Staphylinus erythropterus, imitates a specific species of ant. It’s found in Ireland, my home country. 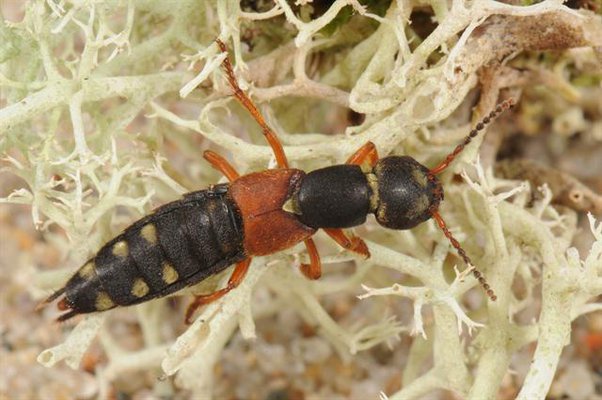 Most rove beetles are ground-dwelling predators of smaller insects - however, with close to 64,000 species, there are plenty of outliers with different lifestyles. Surprisingly, there’s only one species known to be eat live plants - Himalusa thailandensis, discovered in 2010.

Some genera, such as Myotyphlus from Australia, clasp onto the hairs of small mammals like mice and rats, as pictured below. This isn’t bad for the hosts, though; the rove beetles eat the insect parasites on their fur, so the relationship is in fact symbiosis. It’s like a micro-scale version of oxpeckers and buffalo. 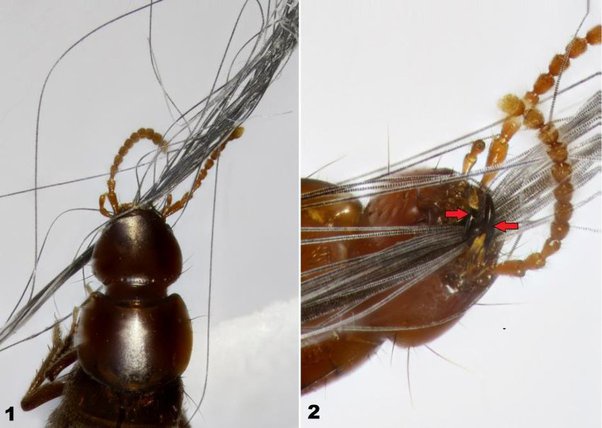 One very common species found across the Northern Hemisphere, the hairy rove beetle, is a scavenger which feeds on carrion. It’ll also chow down on maggots which are eating the same carcass. There are a quite a few detritivorous rove beetles, but this one is especially interesting for a quirky reason…

When a dead human body’s been around for a while, chances are there’ll be some hairy rover beetles on the scene. Their scavenging habits are well-studied, so their presence (or absence) helps forensic scientists estimate the time of death, or post-mortem interval.

And they’re not the only useful rove beetles. Delia fly larvae, known as root maggots, destroy the roots of crops. Many species in the genus Aleochara are parasites of Delia flies - more specifically, they’re parasitoids, meaning they kill their hosts. Because of this, they’ve been employed as a pest control organism.

After it’s born, an Aleochara beetle burrows into one of the flies’ puparium - the shell of skin which protects the developing maggot. It then lives inside this shell, slowly vacuuming up the maggot like jelly in order to survive. Once it’s done eating, it cracks out of the puparium and begins adult life. 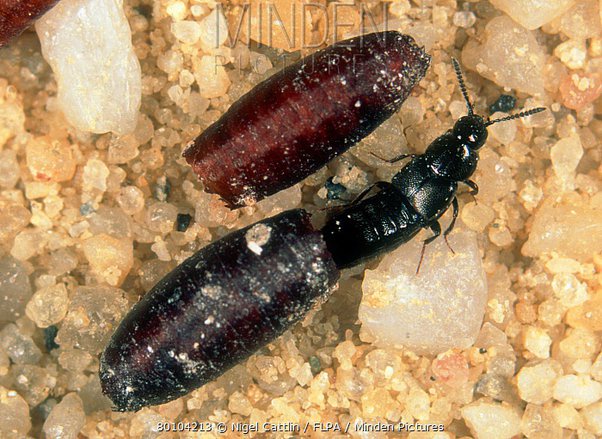 There are even many species of rove beetle which live right by the ocean - about 400 in total. The most well-known is the pictured rove beetle, found on North America’s West Coast, which digs tunnels in the beach sand. It stays under here during high tide, when the coastline is submerged, and comes out at night to hunt sandhoppers.

The pictured rove beetle is perfectly camouflaged: its colouration even varies depending on the local sand type. Up in Alaska, they are darker to blend in with black volcanic beaches, but in California, they’re pale beige.

However, where things really get crazy is with the myrmecophilous rove beetles - those that live in close association with ants. These are divided into three categories: “unwanted guests”, “tolerated guests”, and “welcome guests”.

Unwanted guests, or synecthrans, live on the outskirts of ant colonies. Some of them use the ants’ “cemeteries” to lay their eggs, so their young can feed on discarded ant carcasses. Others prey directly on members of the colony.

To combat the army of ants, synecthrans employ an arsenal of chemicals. Some produce the very same signal pheromones as their hosts, so that they can essentially fool attackers into thinking there’s no threat. Others spray compounds which disorientate the ants for long periods. 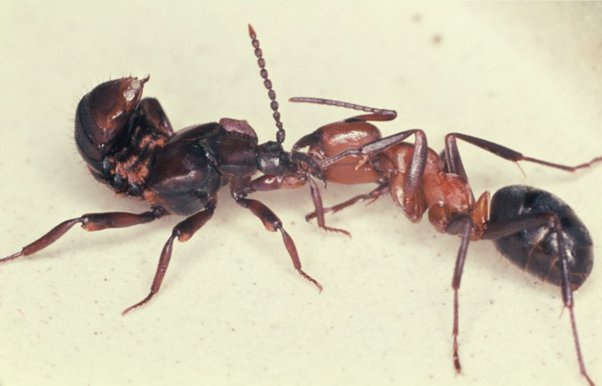 Tolerated guests, or synoeketes, use a variety of strategies to go unnoticed by the colony. Some just stay out of the way, feeding only on discarded waste or fungi. Some species mimic the ants themselves, being indistinguishable from the real thing, by the real thing. The insect on the right, below, is a rove beetle: 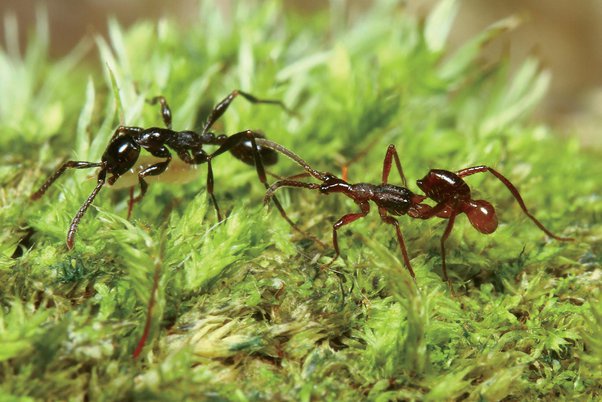 There are also those which are simply built like tanks, and thus not worth the effort of attacking. These typically have very strange anatomy - they’re shaped like broad teardrops, and covered in armour plating. Because of this, they are extremely hard for ant jaws to get a grip on, so the hosts sort of have to tolerate them.

Lastly, you have the welcome guests, or symphiles, which have been fully incorporated into the ant society. Think of these like “employees” of the colony - they help with feeding and raising young, transporting food, grooming and much more. In return, they are fed by other ants through trophallaxis (mouth-to-mouth vomiting, basically).

In order to essentially live permanently as ants, symphile rove beetles have modified their ancestral body plan drastically. Their mouthparts have disappeared in order to take part in trophallaxis, and many of the segments in their abdomens have fused together. It takes one look at the species below to see that this is not your typical rove beetle. 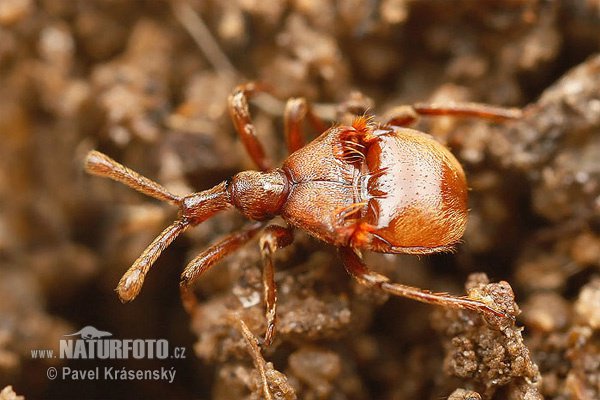 The species detailed in this answer are just a handful of the many tens of thousands there are known. And that’s not even considering all the ones which are unknown - hundreds of new rove beetles are discovered every single year. In tropical regions, it’s estimated that we’ve barely uncovered a quarter of their diversity.

So, it’s a given that there are still more amazing, unique species in this family which we’ve yet to see. Thank you, everyone, for making it through this very lengthy ramble about beetles, and I hope you have a great day.