14 Incredible Discoveries Made by Divers in the sea 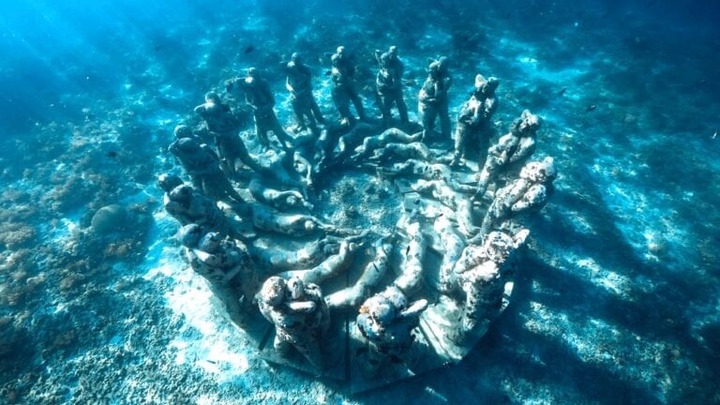 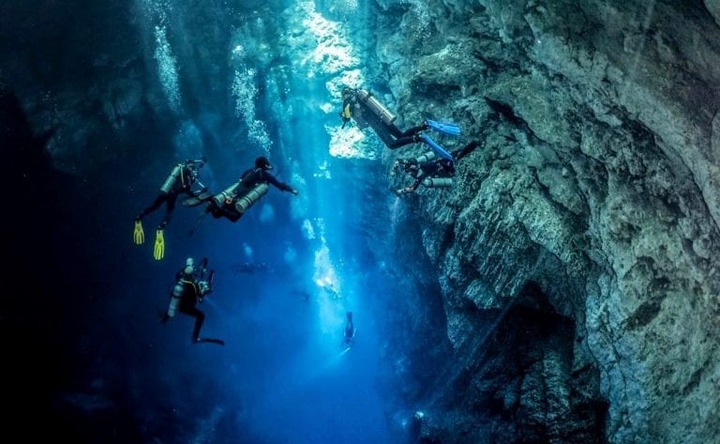 Looking a little like a skull, Mexico’s “Temple of Doom”, aka Cenote Esqueleto, is an apt name as one of the most hazardous and intricate dive sites in the world. This cenote is incredibly dark, disorientating and dangerous.

Divers are asked to stick to sunlit areas to be safe, and take extreme care as many passageways are tight and narrow. It’s very easy to become lost in Cenote Esqueloto, and many divers have run out of air trying to find their way back and died.

Not hazardous enough? There is also no access ladder at Cenote Esqueleto, meaning those keen to reach the intricate cave network that lies far beneath the surface have to take a giant leap of faith right at the beginning. However, the Temple of Doom rewards courageous divers with its fascinating deep and complex cave formations, boulders, and stalactites.

The Ghost Fleet Of Chuuk Lagoon 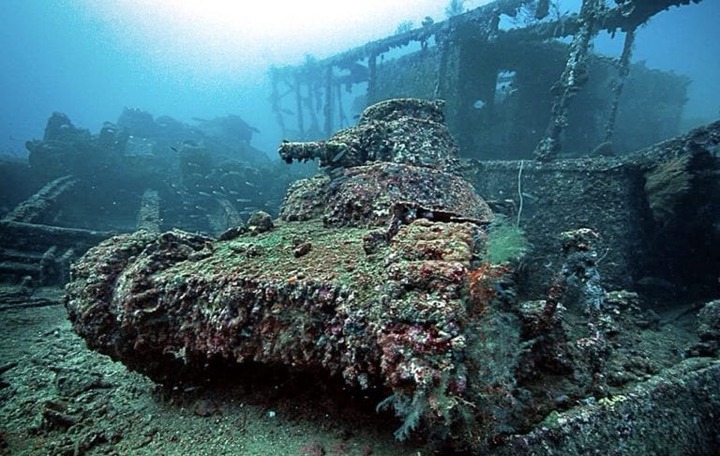 Like to go wreck diving? Chuuk Lagoon is hard to beat. Located in the remote Central Pacific, underwater explorers flock here to see the world’s largest ghost fleet. Known to some as ‘the Japanese Pearl Harbour’, what awaits beneath the surface is awesome indeed. Difficult to put into words, Chuuk Lagoon must be seen to be believed.

There was once an impenetrable Japanese naval base here, but as World War II approached its end, the stronghold was destroyed in a devastating attack known as Operation Hailstone. In total, the United States destroyed 16 warships, 32 merchant ships and 25o aircraft.

Nowadays, wrecks litter the lagoon’s sand-covered floor filled with marvellous marine life, and beckoning divers with their long-lost treasures. Look out for the San Francisco Maru, a vast cargo ship that still has three tanks on deck. Haunting and exciting in equal measure, this is a dive site that is not to be missed.

The Wreck Of The USS Saratoga 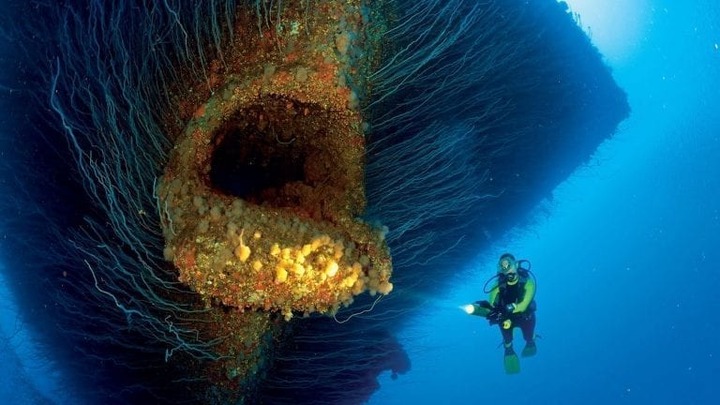 This is a ship that can boast a fascinating back story an aircraft carrier that saw significant action during World War II, torpedoed by a Japanese submarine following the Pearl Harbour attack, before taking part in the legendary Battle of Iwo Jima.

Christ Of The Abyss 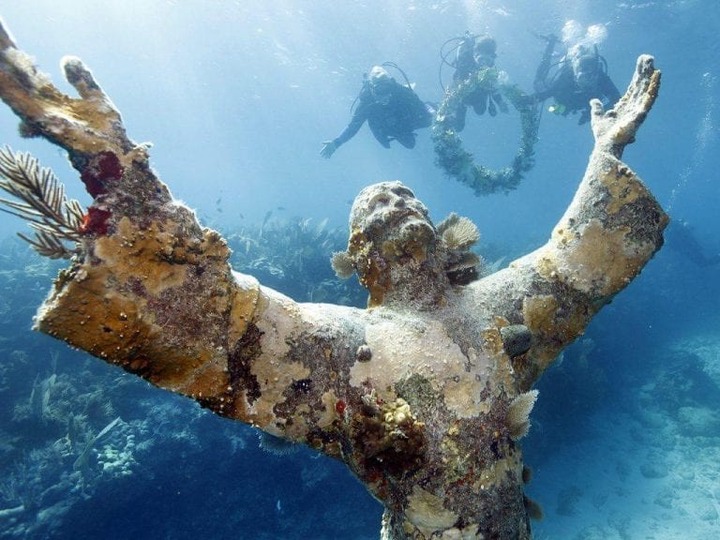 For avid divers or anyone interested in underwater exploration, Christ Of The Abyss is a must-see dive site. Located in the shimmering Mediterranean, between Camogli and Portofino on the Italian Riviera, this is a sacred spot for scuba divers.

Found 56 feet beneath the sun-kissed surface, this is a peaceful place indeed. Measuring eight feet from head to toe, Guido Galletti’s submerged bronze statue offers a benediction of peace, its head and hands raised towards the skies above.

Placed at the spot where Dario Gonzatti, the first Italian to use scuba equipment, died in 1947, Christ of the Abyss has stood here since 1954, beckoning those keen to pay their respects. Similar statues can be found in waters around the world, but the purists always head here to see the original and the best. 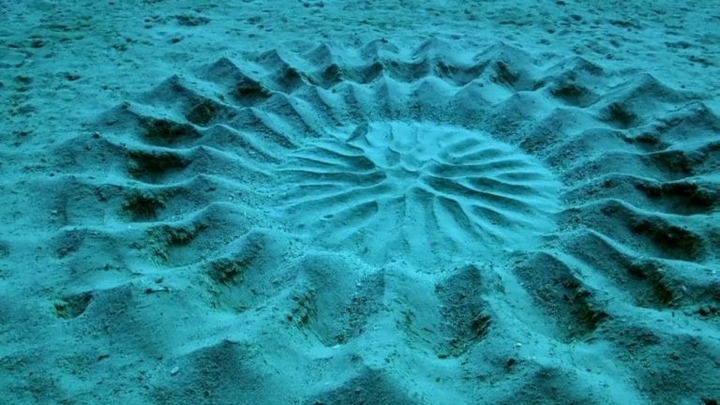 Measuring six feet in diameter and found 80 feet beneath the ocean surface, no-one could explain their origins. Further dives soon revealed the reason, however. This has nothing to do with aliens — but the explanation is no less fascinating.

The rippling geometric patterns are, in fact, created by small puffer fish, who toil to fashion intricate designs on the soft ocean floor. The reason? Scientists have discovered that these delicate ‘drawings’ help the puffer fish to attract a mate, as well as providing a safe place for eggs to be laid. It’s a beautiful sight and an incredible discovery. Preparing to dive in Japan? Be sure to look out for the puffer fish and their amazing underwater artworks.

Sunken Yacht In The Antarctic 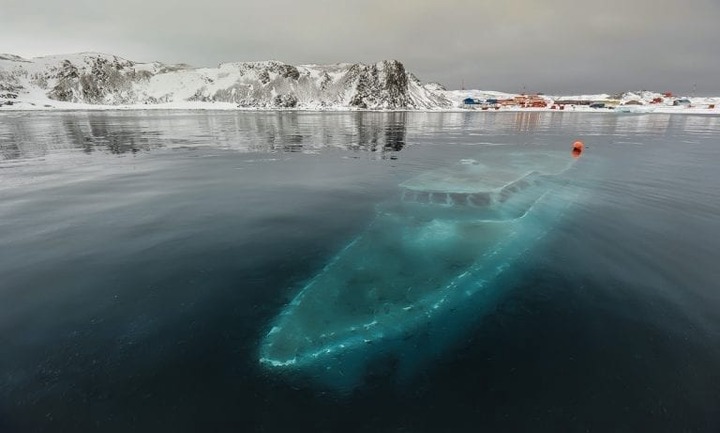 Ghost ships have long beckoned divers keen to explore their sunken hulls. Most date back to days long gone, but the stricken Mar Sem Fin was a wreck more modern.

This Brazilian research vessel slipped beneath the surface in 2012 having become trapped in the frigid waters of Maxwell Bay, not far from King George Island, some 750 miles from South America’s southernmost tip. The 76-foot yacht has since been recovered. But, for a time, this was a dive site like nowhere else on Earth.

The Mar Sem Fin got into trouble having been battered by 60mph winds and, with the crew having been rescued, the ship’s fate was inevitable. Having sunk to a depth of just 30 feet, the wrecked yacht could be seen from the surface, the Antarctic conditions giving the impression that it was glowing beneath the water, demanding to be discovered.

Wreck Of The Titanic 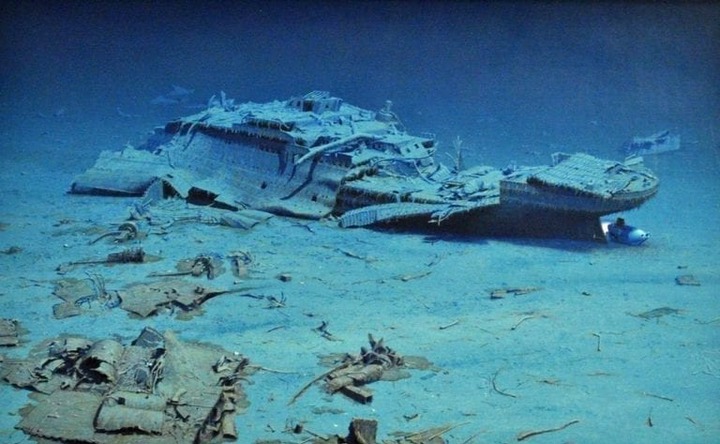 Having slipped beneath the ink-black surface one night in 1912, Titanic lay undisturbed on the frigid ocean floor for almost three quarters of a century. Rediscovered during a secret operation in 1985, divers have longed to explore the renowned wreck ever since.

Getting there is the problem, with Titanic’s holed hull lying more than two miles down in an unpredictable part of the Atlantic that is almost impossible to access. Yet plans are afoot to resume exploration, using special submersibles to transport those with the means to a dive site like no other.

It was an oceanographer called Robert Ballard who located the wreck in the 1980s, but the costs and logistics involved have made return visits problematic. With Titanic disintegrating, those keen to follow in Ballard’s footsteps know that time is running out.

Like to take a trip? It will cost a fortune, but with Titanic’s bow, deck and bridge to explore as well as a vast debris field strewn with historic artifacts from that fateful voyage those who can afford it might consider it a price worth paying. 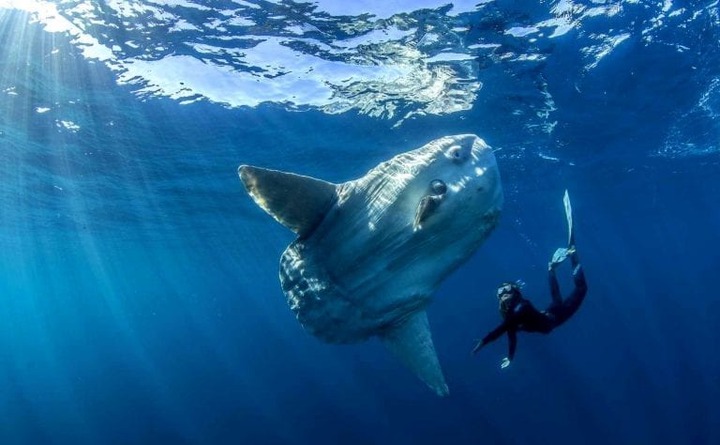 The first diver to have ever encountered a Moon Fish must have been given quite a fright. Measuring up to three metres from head to tail and sometimes over four metres from fin to fin this is an immense creature indeed.

Large it might be, but the Moon Fish is no threat to divers. Recovered from the initial shock? Swimming alongside this gentle giant is a rare treat indeed.

The Moon Fish has several names including, somewhat confusingly, the Ocean Sunfish but its moniker matters little to those keen to get up close and personal. Found in temperate and tropical waters around Southern California, Indonesia and New Zealand, the so-called Swimming Head (another nickname, this one that points to the Moon Fish’s unusual shape) is calm and shy.

Happiest swimming close to the ocean surface, the massive Moon Fish can weigh up to 1,000kg making it the heaviest bony fish on Earth. Impossible to miss, this is one to discover on your next dive trip. 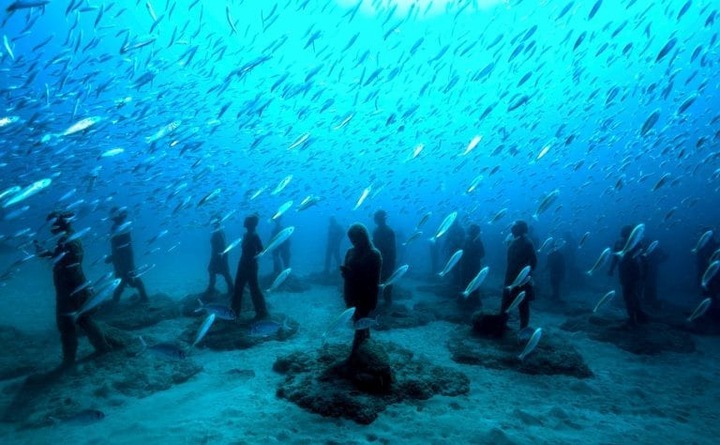 There’s nowhere on Earth quite like the haunting Molinere Underwater Sculpture Park. Located off Grenada’s popular western shores, divers take to the warm Caribbean Sea to catch a glimpse of the strange underwater world that the British sculptor Jason deCaires Taylor created here in 2006.

There’s a circle of life-sized human figures, all holding hands, that can unsettle the unprepared, whilst other attractions include ‘The Lost Correspondent’ a man sitting at a desk, working on his typewriter and ‘Man on a Bike’ (no explanation necessary).

This is all on the ocean floor, remember, but if it all seems a little silly, Taylor’s work is serving a useful purpose. Enhancing the native reef and encouraging marine life, the ocean is claiming this artificial environment as its own, a little at a time, and more and more creatures are making their homes amongst the sculptures. It makes for a fascinating dive and no matter how often you visit, there’s always something different to discover down here.

A Hole In The Earth 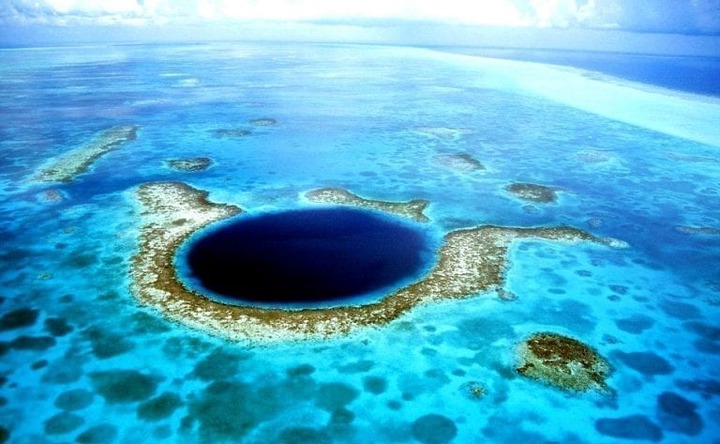 Divers have long known about the huge marine sinkhole aka the Great Blue Hole that lies close to Lighthouse Reef, an atoll 70km from Belize’s sun-kissed shores.

It wasn’t until recent times, however, that the secrets that lie at the hole’s mysterious bottom were discovered. Heading deep down, more than 120 metres beneath the shimmering ocean surface, curious divers found a dark place indeed.

Higher up, life abounds with sharks, turtles and colourful corals amongst the spectacular sights to be seen. Down below, however, it is a different matter. Upon reaching 90 metres, divers discovered a thick layer of toxic hydrogen sulfide described as a vast ‘floating blanket’ that spanned the hole in its entirety.

Beneath this, all life vanished, with no oxygen and nothing to see other than long-dead crabs and a so-called ‘conch graveyard’. The most interesting find? The divers discovered small stalactites suggesting that this was once a huge dry cave, most likely formed during the last Ice Age, some 14,000 years ago.

36 Million Dollars Worth Of Silver 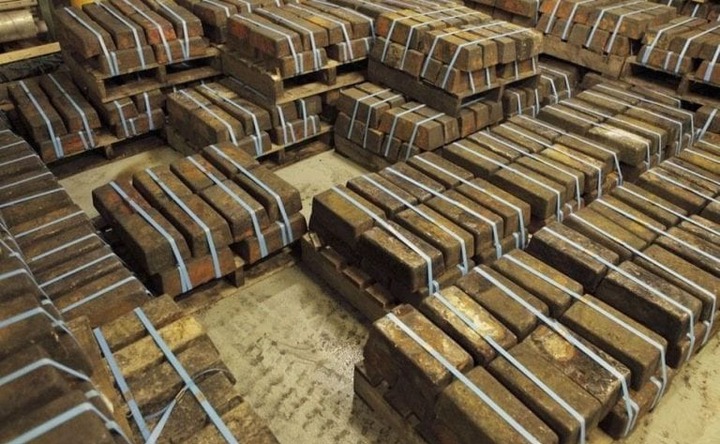 In 1941, the SS Gairsoppa a British-built merchant ship that had seen service during World War II departed India bound for Ireland. It never reached Galway, its intended destination, having been sunk by a torpedo, fired from a lurking German U-Boat.

The Gairsoppa slipped to the deep ocean floor, its 85 crew members killed and its precious cargo lost. That cargo? Some 48 tonnes of silver bullion, with an estimated value of more than $30 million (at today’s prices). The wreck sitting in 15,000 feet of water, it was thought that the treasure was lost forever.

In 2011, however, deep-sea divers discovered the Gairsoppa’s remains and a delicate operation began to recover the treasure from the ocean floor. It took a little time and much careful planning, but the silver was found and brought back to the surface. Considered ‘the deepest, largest precious metal discovery in history’, it is thought there might still be more riches down there just waiting to be found. For curious divers, it’s an intriguing proposition. 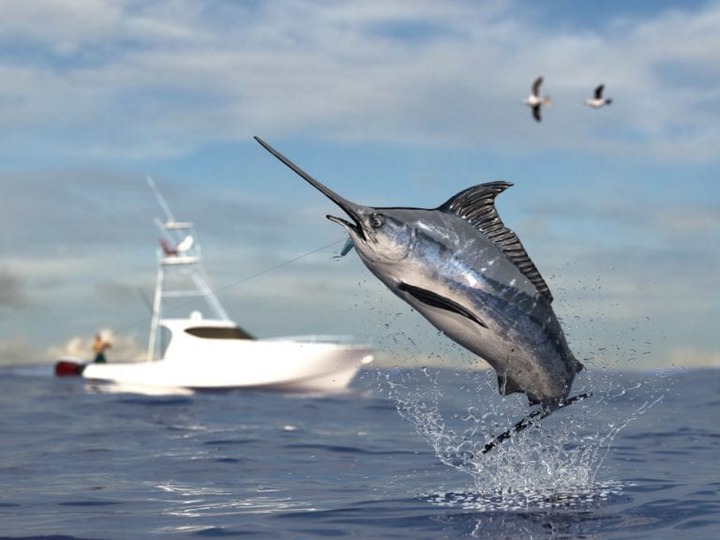 It might look as though it once belonged to an immense sea monster, but the truth is a little more prosaic. The chances are the eyeball came from a large swordfish. Prosaic perhaps, but this is still something that most divers would prefer not to discover.

Swordfish tend to be deep-sea dwellers and can reach huge sizes up to four-and-a-half metres in length, and weighing 650kg. The giant eyeball must once have belonged to an incredible specimen indeed. You never know what you might find when exploring the ocean.

3 Unsual Large Animals That Really Exist (No.3 Is Amazing)

She Was Born Without Legs But Still Found True Love, Check Out Her Name, Country And Photos

Bad news for all south africans

7 Foods You Should Avoid If You Are Suffering From Heartburn

They Are threatening To Kill Me, After My Brother Got Assignated- Sizophila Mkhizw Cry Out

Top 10 Accounts of Cannibalism That Will Freak You Out