There is a lot about space that we don’t know about, with scientists making discoveries all the time. One of the most mysterious planets is Mars. Known as the Red Planet, Mars is the fourth planet from the sun as well as the second smallest planet after Mercury. Mars gets its nickname from the reddish tint of its surface. The planet’s red color comes from iron oxide on the planet’s surface. As a terrestrial planet, Mars has a thin atmosphere. Its surface features many craters and divots similar to those seen on the moon and in the Earth’s polar ice caps, deserts, and valleys. Because of the way the planet rotates, its seasons and days are close to those on Earth.

The largest volcano and second-highest mountain peak in the Solar System are Olympus Mons, located on Mars.

Currently, researchers are looking into whether Mars could be viable for human habitability in the future. Mars has been explored for decades, and there are presently eight spacecraft being used to investigate the Red Planet. Six spacecraft are orbiting Mars, while two are present on the surface. The

rover Curiosity and lander InSight are equipped with cameras that capture what’s going on Mars’ surface. Curiosity and InSight travel across the planet and they have taken images of many unusual things on Mars. Keep reading to see what unique discoveries have been made on planet Mars!

1. Mars is half the size of Earth but has twice as many moons.

You might be tempted to think that the number of moons that a planet has depends on how giant that planet is. Not so. Earth is 7926 miles in diameter and has only one moon, the big one you see up in the night sky, that orbits it. The Moon is Earth’s only proper natural satellite. It is one-quarter the diameter of Earth making it the largest natural satellite in the Solar System relative to the size of its planet. It is the fifth largest satellite in the Solar System and is larger than any dwarf planet. 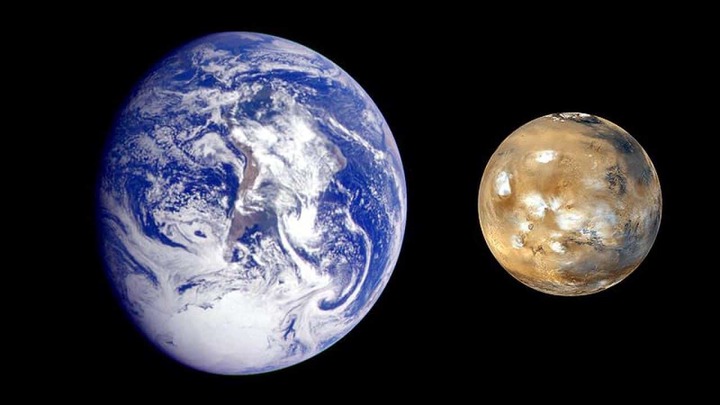 On the other hand, Mars is a puny 4220 miles in diameter, but it has two moons, named Phobos and Deimos. The Martian moons are relatively tiny, though; Phobos is 13.8 miles across, and Deimos is even smaller, at 7.8 miles. You probably drive further than the length of both of Mars’ moons on your daily commute. Oh, and another fun fact? The moons of other planets tend to get cool names, like Phobos. Earth’s moon is just called the moon.

2. Mars has only 38 percent of Earth’s gravity. 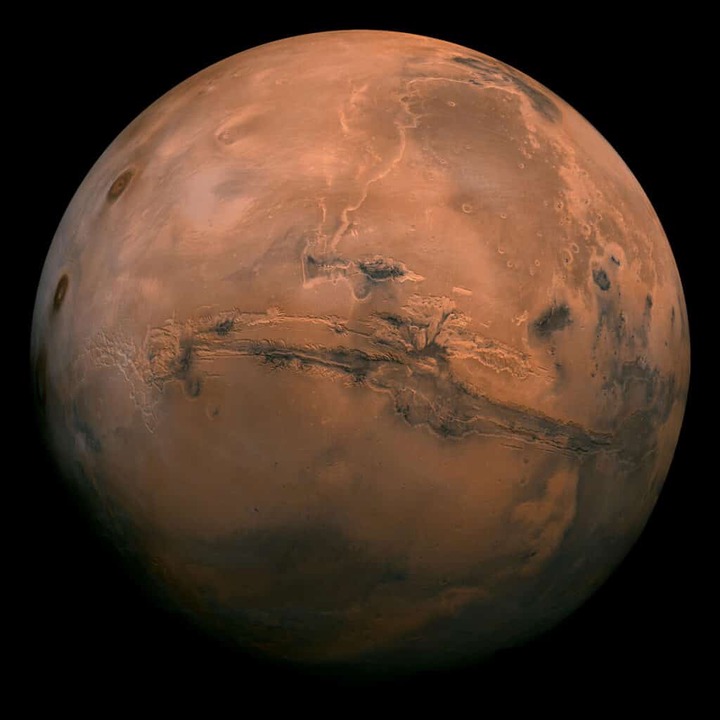 If you are trying to lose weight and the keto diet is not helping you, one alternative may be to go to Mars. Because the planet is so much smaller than Earth, its gravity is much lower nearly two-thirds lower than Earth’s gravity! Between this difference in size, mass, and volume, Mars’s surface gravity is 3.711 m/s2, which works out to 37.6% of Earths (0.376 g). In terms of their orbits, Earth and Mars are also quite different. 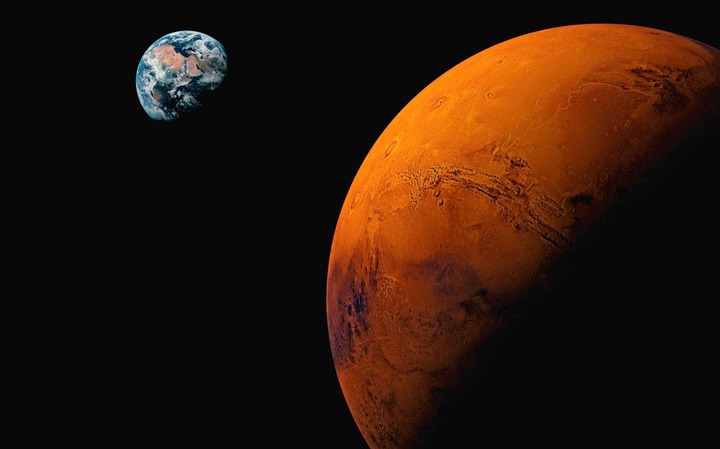 Lower gravity means that things weigh less. So if you weigh 100 pounds on Earth, you would only weigh 38 pounds on Mars. Somebody who weighs 300 pounds here would, in the Martian atmosphere, find himself or herself to be a svelte 115. But the problem, at least for now, is getting to Mars, so you may want to keep trying the keto diet for a few more decades.

3. The Martian atmosphere is very different from Earth’s. 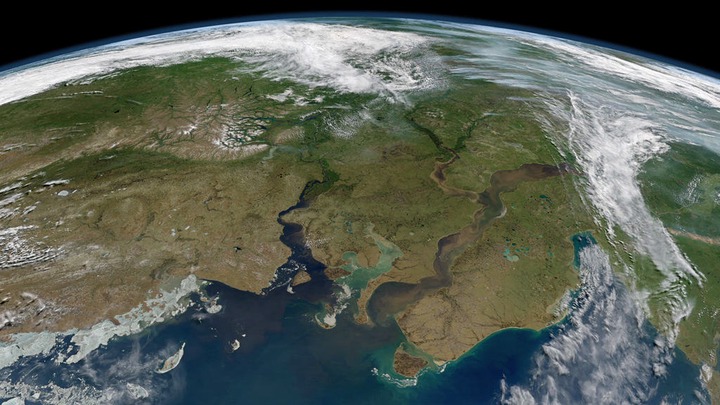 The two most abundant elements in the solar system are hydrogen and helium, and they form the bulk of the composition of both the Earth and Mars. However, there are also many other elements in Earth’s atmosphere, many of which are created by the respiration of the organisms on Earth. For example, our atmosphere has enough oxygen for humans and animals to thrive because plants breathe in carbon dioxide and breathe out oxygen. 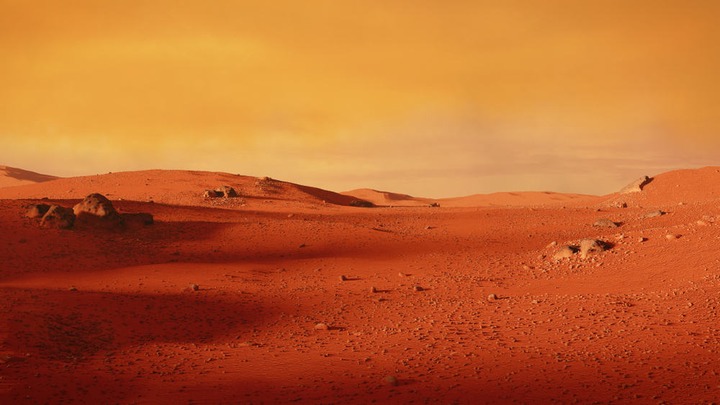 Mars, on the other hand, does not have plants to convert its carbon dioxide into oxygen. Fully 96 percent of its atmosphere is carbon dioxide, so there is no way that humans could live in those conditions. Furthermore, its atmosphere is 100 times less dense than Earth’s, so even if we could solve the oxygen problem, we would have a lot more challenges to overcome before living there.

4. If you are hungry, you might think this is a real jelly donut. 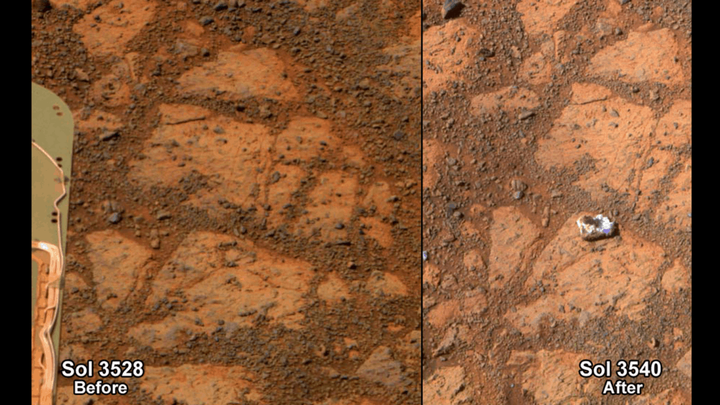 On January 8, 2014, Mars rover Opportunity captured an image of a rock that looked strangely like a jelly doughnut. Pictures taken a few days before in the same spot did not show the same object. Many people considered aliens or a meteorite collision could have been responsible for the jelly doughnut.

5. Martian dust devils are legit, but not in the way you think. 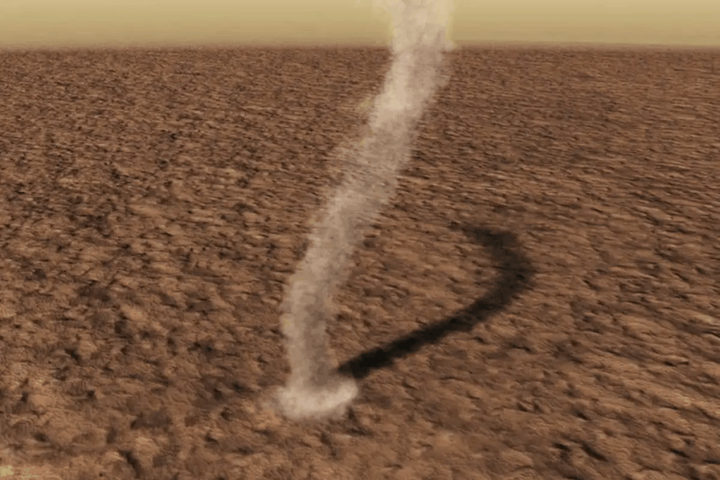 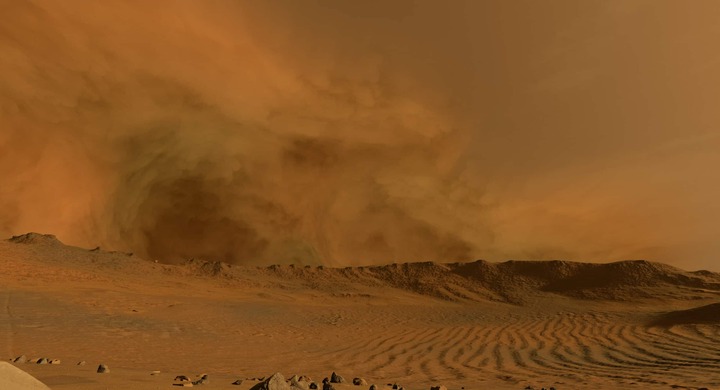 These monster formations are roughly ten times larger than any tornadoes that occur on Earth. They can be many kilometers high and hundreds of meters wide. Dust and red sand whip around at more than 70 miles an hour, reducing the visibility to zero. Although the atmospheric pressure on Mars is low and would cause the wind to be light, a person or object on Mars would be significantly impacted if hit by a high-speed dust devil. Also, the dust devils on Mars have an electric charge, making them even more dangerous. You could potentially see up to half a dozen dust devils during a Martian summer during an afternoon.