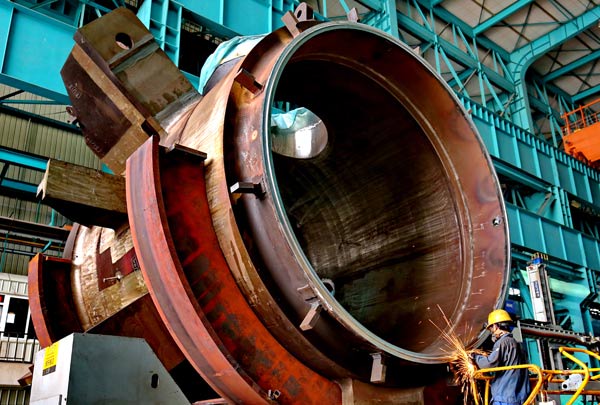 A worker performs a soldering job at a factory in Qinhuangdao, Hebei province, which makes equipment for the HTGR reactor plant at Shidaowan in Shandong province. [Photo/Xinhua]

The No 1 reactor of Shidaowan nuclear power plant in Shandong province, the world's first industrial-scale demonstration plant of high-temperature gas-cooled reactor with pebble-bed module, which is considered relatively safer, has reached the critical stage of success on Sunday, said China Huaneng Group Co Ltd, its operator.

The reactor has been fully developed by China with independent intellectual property rights.

It completed fuel loading on Aug 21, taking a step closer to grid-connected power generation within this year, said Huaneng Group.

High-temperature gas-cooled reactors, globally known as the fourth-generation nuclear energy system, are believed to have broad development prospects for their inherent safety, versatility and modular construction.

"The high-temperature gas-cooled reactors can be safer as they require no water for cooling, and that the unit's melting point exceeds the upper limit of the reactor's temperature range," said Wei Hanyang, a power market analyst at Bloomberg New Energy.

"Working without a containment vessel also means the high-temperature gas-cooled reactors' construction can be cheaper, and potentially be applied in more countries and locations."

Wei said he believes with demand for power surging in coastal regions, China's total nuclear installations may approach 100 gigawatts by the end of 2030.

As China promotes greener development and prioritizes safety and security of nuclear power plant construction, it has also pledged to peak carbon emissions by 2030 and achieve carbon neutrality by 2060.Energy industry insiders are optimistic about prospects for the nonpolluting energy resource in China over the next few years.

"China's need for clean energy means that nuclear power generation definitely has an important place in the long-term energy mix, and the Chinese companies' cost control capabilities and technological advancements are also likely to continue providing domestic companies with advantages," he had said.

The Shidaowan nuclear power plant's construction started in 2012.The project successfully completed the cold and hot tests of double reactors in March this year. It received the National Nuclear Safety Administration's license to start operations in August.