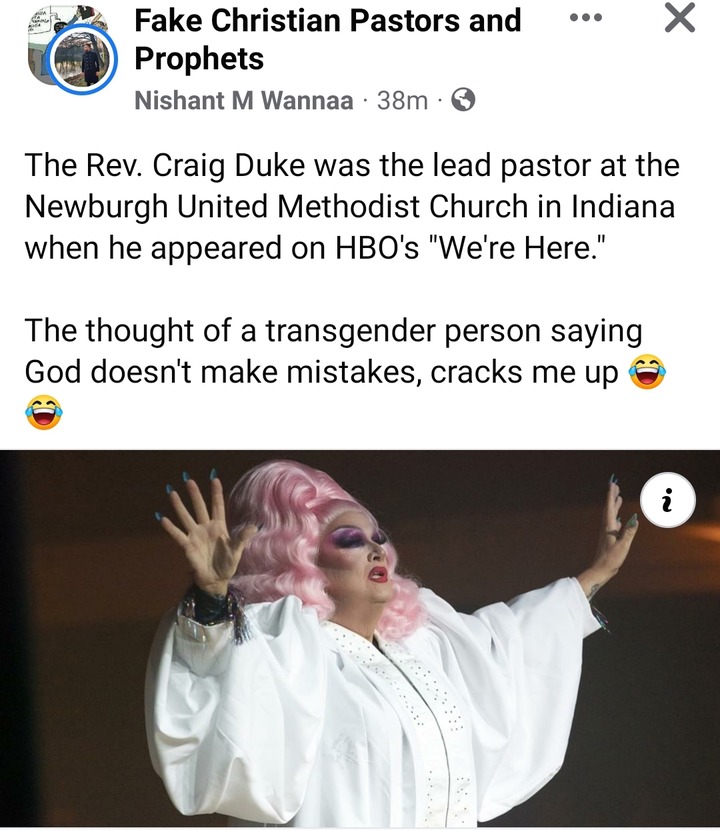 An Indiana pastor has been fired or forced to leave his job after being criticized for performing in drag on the HBO show "We're Here."

This demonstration follows three drag queens — Bob the Drag Queen, Eureka O'Hara and Shangela Laquifa Wadley — as they travel to small towns to put on drag shows. In each town, they pick out local community members whom they dub their "drag daughters" — and teach them how to perform in drag. The show tackles issues of self-love and finding LGBTQ community in small towns and conservative areas. Craig Duke, a pastor at the Newburgh United Methodist Church in Newburgh, Indiana, a little town near the Kentucky border, performed alongside "drag mother" O'Hara in an episode that aired on Nov. 8. The duo performed to Kesha's "We Are Who We Are," with Duke wearing a bright pink wig and a white robe.

"It is impossible to do a drag show like this in southern Indiana and not offend someone," he said in the episode, noting that the community is conservative. "I'm hoping it's a bridge for my daughter, for the church I serve, for the denomination I love and for me. And I'm hoping that my voice will become stronger."

Duke has not responded to a request for comment in regard to his separation from the church, but he told the Religion News Service that he started receiving emails from congregants shortly after the episode aired. Enough of them were negative that his church's Staff-Parish Relations Committee insisted that he request a new task from Bishop Julius C. Trimble of the Indiana Conference of the United Methodist Church.

In a while he awaited that appointment, he had planned to lead a Bible study about sexuality in the church, but he received another “negative, bullying, attacking email from a church person” that "flipped the tide" for him about a week after the episode televised.

“It just got to the point where the conflict, the anger grew so much, and so for my mental health, too, I started to back away, and I told my district superintendent that the conflict was so much, it was at such a level from some, that I was unable to be a leader, with effect” he told Religion News Service.

Craig Duke talks to his "drag mother," Eureka O'Hara, left, while having a wig fitted for his show on "We're Here."Jakes Giles Netter / HBO.

In an email to NBC News, Mark Dicken, the interim pastor at Newburgh United Methodist Church, shared a letter regarding Duke's leave that he said was sent to the church members. The letter is signed by Mitch Gieselman, superintendent of the south and southwest district of the Indiana United Methodist Church.

"There is not even single resolution that will will be satisfactory to all," the letter states. "I’ve received numerous calls and emails that are highly critical of Craig’s actions, and I’ve received numerous messages of support for him. In such a polarized climate, our main intent is to foster an environment in which both NUMC and the Duke family can move forward in grace."

According to the letter, Duke was "stripped off from pastoral duties" effective Dec. 1 and will receive a reduced salary until Feb. 28. It clarifies that he has not resigned nor has he been fired.

"While there is still an diversity of opinion regarding the moral implications of Rev. Duke’s actions, he has not been found to have committed any chargeable offense or other violation of the United Methodist Book of Discipline," the letter states. "In short, Craig has reached a place where he feels unable to continue to serve in parish ministry at the moment"

"It is quite unfortunate, Craig’s participation in this show caused much turmoil in the church that he was serving at the time and ultimately lead to him being 'relieved of pastoral duties' at that church," a statement on the GoFundMe page stated, adding that Craig's salary was "significantly" reduced.

"Obviously, this poses a major challenge to Craig and his family as they determine what their next steps will be."

The fundraiser has since surpassed its $30,000 goal, raising more than $40,000 as of Tuesday. Duke's family will use the money for living expenses, the description says, and "any donations above the goal amount will be put towards the most effective and inclusive ministry continuously."

O'Hara, Duke's drag mother on the performance, shared the GoFundMe on Twitter and encouraged people to support it.

The LGBTQ media advocacy organization GLAAD called Duke's leave from the church a "disservice" to the community.

“Pastor Craig Duke came into a community that has experienced disproportionate church-based trauma to proclaim a message of God’s love for all of creation," Ross Murray, senior director of education and training at the GLAAD Media School, said in a statement. "Pastor Craig is emulating the example of Jesus, who also spent time with those who were deserted by the pious. That his own church members bully him and the church hierarchy into removing him from his ministry is a disservice to the congregation, to the Evansville community, and to the ministry of the United Methodist Church."