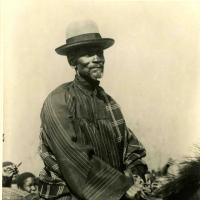 Isaiah Shembe was born at Ntabamhlophe near Escourt in the Drakensberg region (near Giants Castle). His forefathers had settled there to escape the regiments of King Shaka. The family later moved on to Ntabazwe (Harrismith district) in the Sotho region of the Orange Free State, higher up in the Drakensberg mountains. The Shembe family was Zulu and originated from Zululand. Isaiah Shembe’s father was Mayekisa, who was the son of Nhliziyo. They were from the Ntungwa tribe with the praise-name Nhlanzi (fish) from Donsa. Isaiah’s mother was Sitheya, the daughter of Malindi Hadebe, born at Mtimkulu. During his youth, Shembe worked as a herd-boy for a White man. It was during this time that he heard a voice urging him to pray. He did not know anything about praying except for having heard from the elders that “uMvelinqangi” had created all things on earth and heaven. His desire for prayer led him to the Wesleyan church.

Over a period, Shembe found himself dissatisfied with the Wesleyans and he decided to leave the church. He was baptized in July 1906, due to his association with the Baptists. Prior to coming into contact with Nkabinde, a former Lutheran who was regarded as a prophet, Shembe seemed to have acted as an itinerant evangelist. Nkabinde led him to establish a healing ministry in 1910. In 1911, he founded the iBandla amaNazaretha (Nazareth Baptist Church), a controversial religious movement rooted in Zulu tradition. Shortly afterward he acquired the farm that became his holy city of Ekuphakameni. He also established an annual pilgrimage to the sacred mountain of Nhlangakazi.

Shembe established communal farms throughout Natal, and pioneered rational and humane treatment of livestock. Rich stock feed was planted, bulls of good breed were bought, and the tenacious Zulu ‘cattle cult’ discouraged. Followers were persuaded to keep a few good milk cows rather than many scrub cattle. This outlook challenged some fundamental perceptions, as cattle was the cultural measure of wealth, but it was critical to curbing overgrazing and erosion of the already barren lands on which Africans had been confined to by colonial legislation, and which at the turn of the 19th century barely supported rapidly expanding populations. Followers who settled on Shembe’s land were governed by a strict Protestant-style work ethic. They strived to become as productive and self-sufficient as the Indian ex-plantation workers-turned-market gardeners alongside whom the Nazareths lived at Ekuphakameni. Though many Nazareths now live in urban areas, nostalgia among older members for life on the land takes most back to their rural family smallholdings for all domestic ceremonies that require ancestral sanction.

Shembe was noted for his dramatic healings, vivid parables, and uncanny insights into people's thoughts. He composed music, wrote many moving hymns, and provided his followers with a rich liturgical tradition based on modified forms of traditional Zulu dancing. Critics of the movement claim that Shembe’s followers regarded him as an incarnation of God. However, others, led by Lutheran scholar Bengt Sundkler, argued that Shembe's theology was an Africanized form of Christianity.

Shembe died in 1935 and although the year of his birth is not exactly known, it can be estimated, that he was approximately 66 years old.