Are they attacking him? Popular Young prophet RA is sick, See what he is suffering from

Lihle Rhadebe, also known as the controversial and youngest prophet from Twitter street, is unapologetic when it comes to doing what he likes, which is prophesying people, traveling, and assisting people with spiritual difficulties. Because of the death of a well-known TV producer and actor Shona Ferguson, he has gained prominence since July.

With his revelations about renowned people and spiritual development lessons, the young prophet began to garner an enormous amount of attention on his Twitter account. Many people have also stated that he has been really helpful in providing them with alignment and knowledge that they were previously unaware of. Currently, the young prophet has 130k followers on social media platforms, making him one of the most popular young prophets in South Africa in terms of number of followers on these platforms.

Despite the hatred, doubts, and animosity that individuals have expressed toward his teachings and predictions, he has persevered. In addition to his public Twitter account, the young prophet continues to share visions and teachings with those who follow him.

Lihle Rhadebe revealed on his Twitter account again yesterday that he was not feeling well. The young prophet claimed that the Ascension symptoms were killing him. He was only sixteen years old. Moreover, he revealed that, at the time, he is unable to accomplish anything or even consume anything. His final words were that he was hopeful that he would be fine by tomorrow and that he would be more than prepared for December and to aid others.

The young prophet's followers were sad to learn that he is sick, and they wished him a swift recovery. Another group of people has claimed that they have been unwell as well and that they believe there is something wrong with the system. 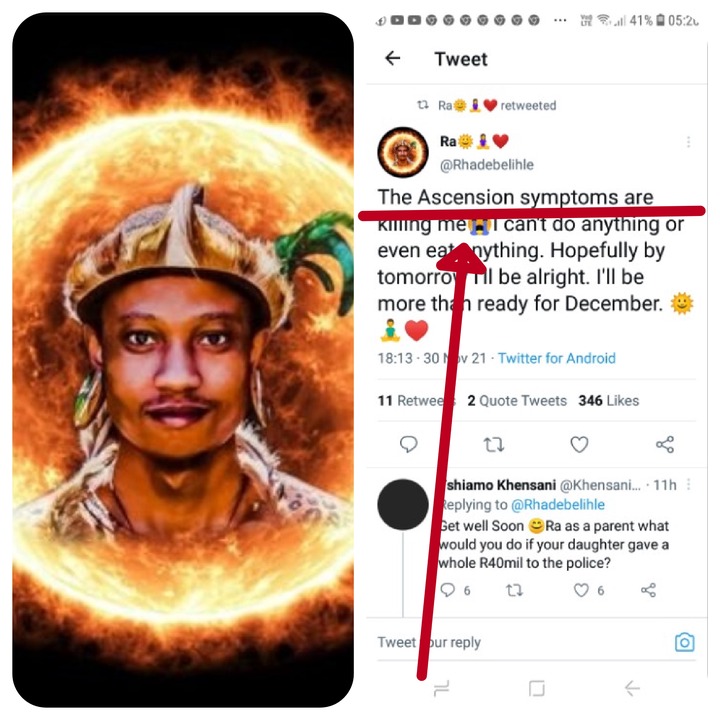