It’s hard to find biblical support for why the church needs buildings to worship God? Opinion 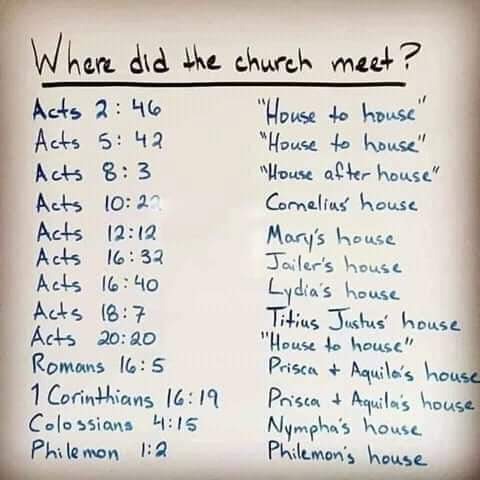 It’s hard to find biblical support for why the church needs buildings before they can worship God. The only reason why the idea of buildings had become tenable for many to believe in is because the true shape or model of church meeting have long being altered and very many no longer understand the real model, including those who claim to have been called into ministry.

Theologically speaking i have from the scripture proved it that buildings for the church are necessarily not needed. Even the difference between the tabernacle which was God’s idea and the temple which happens to the man’s idea is enough to prove this.

The tabernacle to a large extent symbolizes the dynamic nature of God because it was movable. But the temple was something that was static.

However , there’s never anywhere in the Bible we are commanded to raise buildings for the church. Just the way the institution of the Old Testament priesthood became obsolete that is how the idea of the temple had become obsolete as well.

Trying to return back to Old Testament is a betrayal of the reality of the New Testament order. The best the old idea had become over the years is that it had made us become idolatrous like people of ancient isreal. We now take pride in the construction of a building than what is a true core of what Christ wants to express by his life giving spirit through the body.

If I’m to ask anyone where’s the church? To many the answer will be that the church are the buildings scattered everywhere in our localities. But in the early times, when asked same question you will be directed to a closely- knitted, distinct group of worshippers who met in a house.

In the early days of Church there was no special building designated as a meeting because it was not about the building but the people that make the church.

The early believers simply assembled together in ordinary livable houses. But when they grew numerically how did they handle it? Instead of erecting a building, they simply multiplied and met in several homes following the “house to house” principle(Acta2:46;20:20). In a nutshell, the New Testament church was essentially a network of home-based meetings. Hence if there was anything that should pass as a normal church it is the church that meets in the house.

How did buildings then become part of the church today?

The idea of buildings came into the picture when Constantine the emperor of Rome had to elevate the status of the church thereby making it to be regarded as a state religion.

From that moment, the model of the church got altered from being a family like to a corporation redesigned with a bureaucratic system of operation.

In the course of time, the church lost the essence of its existence to raise disciples because church was no longer about the called out but a place where people go to. Moreso, it became a crime then not to be part of the new church system arrangement. Before you knew it, the church got changed from being the “called out” into becoming a place people associate with.

Since the buildings have now being used to substitute the called out people, men ignorantly began to see the buildings as the place where God resides as against in men who had accepted Christ. This is the very reason why men now give preference to buildings than to men. Instead of building men, we have become more interested in raising bricks as the habitation of God.

Today the church now runs like a corporation with the pastor as the CEO, the ministers as members of the board, evangelism the process through which the gospel being packaged as custom fit products to meet the needs of the prospective public and the workers as foot soldiers.

Today so many have succumbed to the intoxicating seductions of the “bigger is better”, a western/ Greek idea which was used to further redesign the bureaucracy which now makes the new church system become like an institution that is self serving, materialistic, consumer driven and individualistic.

Today we hear of how huge amount of Money are being spent on building projects at the expense of raising a community where brethren are each other’s burden bearer. Many institutional churches have become more of an enterprise that now bear resemblances with secular multinational corporations.

If there’s anything the church leaders are guilty of, it is that they have continued to amplify this error and those coming behind are already following in their footsteps.

Is it any wonder why Christianity has become something that far more removed from what was obtainable in the first century. The church has become far more too complex and in many was appear to have fallen from it’s heavenly position. What ought to be a close- knit community of brethren had been reduced to something that now appear like a business enterprise.

Aging does not have to be a painful process.

'AMAZING: If You Put A Cotton Ball With VapoRub in Your Ear All Night, Here’s The Surprising Effect

'See These 7 Signs Your Wife Is Cheating With A Work Colleague.