The Dark Wives, The Curse Of The Original Sin By Satan And Eve In The Garden Of Eden

By Truthbooth (self media writer) | 17 days ago 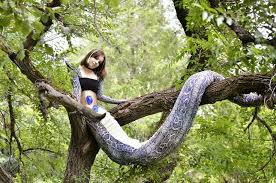 The battle between Good and Evil has been going on ever since the beginning of time, this is because the one needs the other to exist. If there was no evil then people would not know that giving or caring was good because it wouldn't have an opposite. If everything on earth tasted nice then we would not know what sour is, meaning that sour wouldn't exist, and if sour doesn't exist, Nice doesn't exist as well. Everything would be pointless. The climax of the battle between Good and evil was reached when Satan rebelled and was defeated and thrown down to the earth. After a while the Lord created the garden of Eden and the devil was locked out of paradise because the angels guarding the entrance knew him. So he made a deal with a snake and borrowed the snakes body so he could gain entry. Once inside he deceived Eve and procreated with her leaving her unholy. That's when Eve later procreated with Adam and left him unholy as well. The result of an angel and a human engaging in courtship led to a curse being brought upon the woman because of the devils dark Ora.

The woman realized that she had shared the devils power while engaging in courtship and now had a large snake tail. The devil also realized that he was no longer able to change back to his former form completely. He became half snake half man as well. Adam kept the secret because this happened after the Lord banished them from the garden. He did this because all of the animals and plant life were all divine and made out of the holy spirits power. They could not stand the unholy power of the darkness within the garden. The trees were all going to wither and die because of the presence of Adam and Eve. The animals were all going to go into the world. The Lord did not want for this to happen bacuase they were all spirit animals. The Lord took the blueprint for the animals today from them. When Adam realized that this wife had grown a tale, he decided to hide it because the Lord had turned his back on him. He later realized that Eve was able to do the things that Satan could do, she could practice Witchcraft. She had shared her Ora with Satan and he had shared his with her. The curse still persists even till today. There are men who talk of tales of seeing half women half snake creatures in Caves or in the woods at night. They say that she hides as you come closer, but you will see a very thick tale coming up from under her and supporting her frame. This is the punishment that God gave to Eve and her descendants.