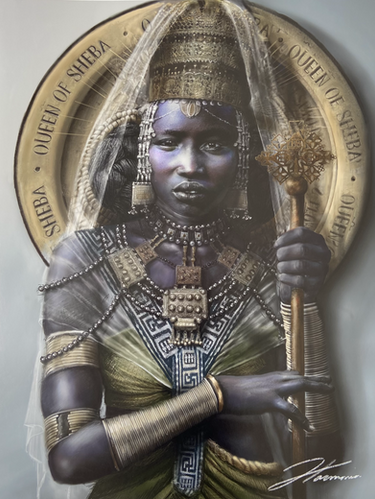 When we were growing we thought the characters in the Bible represent white people as the illustrations of drawings depicted people as white. But today making research and rereading verses of the Bible has helped us to see the real truth of the color of the people in the Bible.

The simple thing is by just categorizing the sons of Noah, Shem, Ham and Japheth. Ham had sons who were Mizʹra·im, Kush and Canaan. Kush gave sons who controlled Babylon, Nineveh to Egypt. In this land its where Kush's people expand to Ethiopia and made it great and feared nation in the ancient times about 1500 BCE.

It was during that time King Solomon grew in wisdom and riches. When the Bible states his wealth it says his wealth was the biggest more than the Jeff Bezos, Elon Musk and Bill Gates combined. When his wealth is converted to modern day money King Solomon still stands top. He worth trillions of dollars.

It was all this wisdom and knowledge that made King Solomon to be known all over the world. Kings of the world were very amazed from his intelligence.

As a result Queen of Sheba wanted to also know this amazing king of Israel. King Solomon was known to be intelligent when he Judged the case of a woman who thought she has lost her child through death. Unknowingly the other woman stole her child when she noticed in the morning that her child was dead.

Instead of accepting the loss he stole the living baby. She exchanged the dead with the alive one. In the morning the innocent woman as usual tried to woke her baby but she was dead.

That's when she cried hysterically and went to King David. She explained everything and the other lady was called. When King David saw the innocent lady crying while the other was jovial. She called his soldiers and told them to separate the child in half by a sword.

The crook never cried but allowed the ordeal to happen. That let to King Solomon seeing that the crying lady was the mother. But the lady who accepted the little one to die King Solomon noticed her lies. Then a pure judgement was passed by Solomon. The real mother got her child back. All this attracted the Queen of Sheba to King Solomon.

Even do the Bible does not point exactly. It's said King Menelik I was born from the union of Queen of Sheba and King Solomon.

Amongst all other black queens Queen Sheba had the greatest empire ever in the world ruled by the woman. When the Bible explains about her journey. It said she took all her servants and went to the kingdom of Solomon with all gifts ranging from gold and all the ornaments the world can offer.

Umndeni: Maseko Threatens To Slap Nkanyezi On National TV And Viewers Are Not Happy

"Are We Really Free?" Top Female Artiste Drop BOMBSHELL On Ramaphosa Over Misuse Of Government Funds

A 28 Year Old Man Accused Of Murdering His Mother

" These Topics Are For Married People" || Twitter President blasts Mboweni After He Said This.