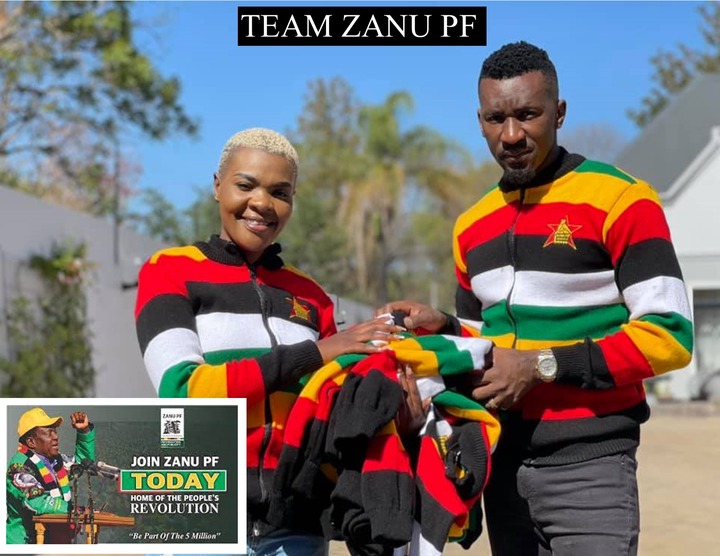 As the majority of Zimbabweans are crying over the government of President Emmerson Mnangagwa, Prophet Passion Java seems to be enjoying the relationship with his new best friend. The man of God has now become the mouthpiece of a party and he is gradually abandoning the word of God. Java has become the mouthpiece of Emmerson Mnangagwa there is hardly a day that passes without him talking about Ed. We know Prophets to be people who are supposed to be rebuking sin and advising rulers on the right path to take. During the August shooting, Java was silent about the shootings. He doesn't say anything to denounce the injustices being done by the Zanu Pf but instead, he has become part of the squad. The only person who has got the guts to denounce these injustices is Apostle Talent Chiwenga. Even though Apostle Chiwenga is a controversial figure he has done what Java and other men of the cloth failed to do. 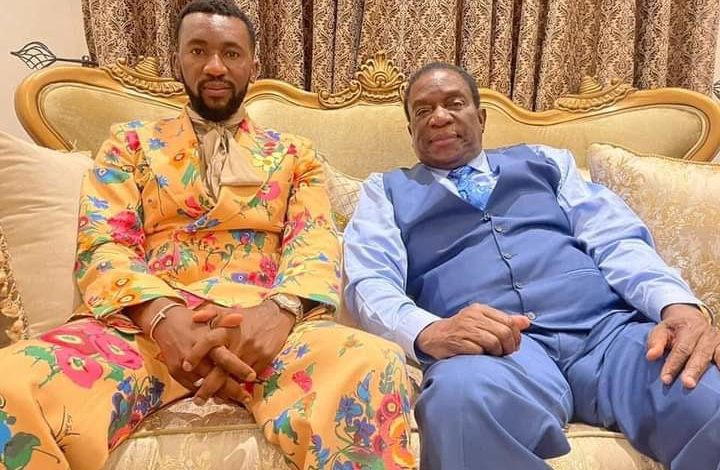 If Java wants the best for Zimbabwe he must publicly denounce the wrongdoings of ED and his government. A lot of people have disappeared for saying their opinion and some people are losing their homes because of Mnangagwa's deal with the Chinese. Regardless of all this Prophet Java still supports ED.

Below is an extract taken from Passion Javas Facebook page. 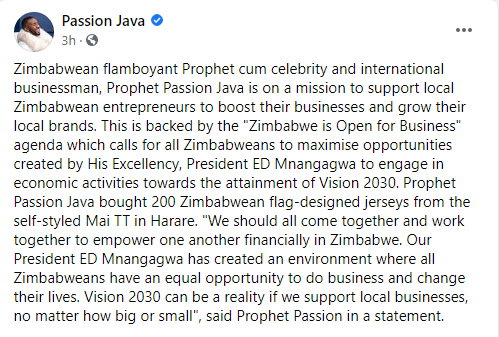 "We should all come together and work together to empower one another financially in Zimbabwe. Our President ED Mnangagwa has created an environment where all Zimbabweans have an equal opportunity to do business and change their lives. Vision 2030 can be a reality if we support local businesses, no matter how big or small", said Prophet Passion in a statement.

There were negative responses from Passion Javas Facebook followers as they seem to be a bit tired of Mnangagwa's government. They castigated him for aligning himself with Zanu pf regime and others even said he needs to build a hospital or donating ambulances to the clinics instead of building a music recording studio and donating cars to people who are not struggling. 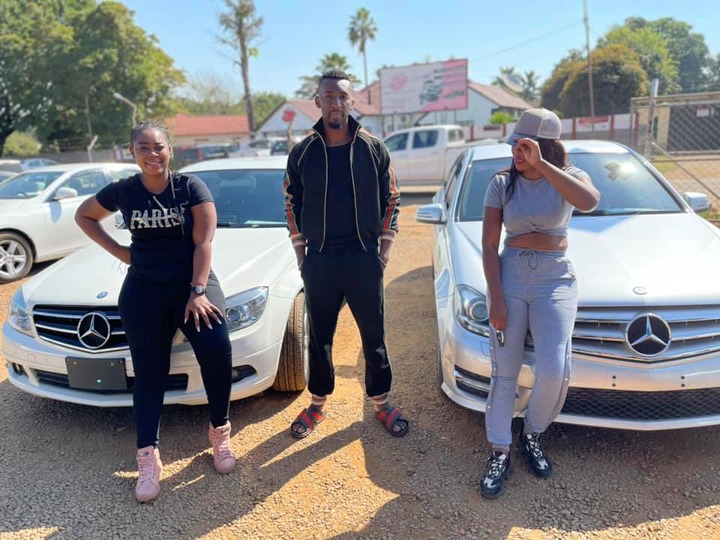 Java wants people to support Mnangagwa's vision 2030 while a lot of Zimbabweans currently are struggling. With the current situation in Zimbabwe how many people will still be alive to see the vision of 2030 being fulfilled. Mnangagwa has failed to fulfill his election campaign promises of more jobs, affordable health care, getting read of corruption, a reliable transport system, to mention but a few. If Java wants to make a difference in the lives of Zimbabweans he must encourage Mnangagwa to honor his 2018 election promises. 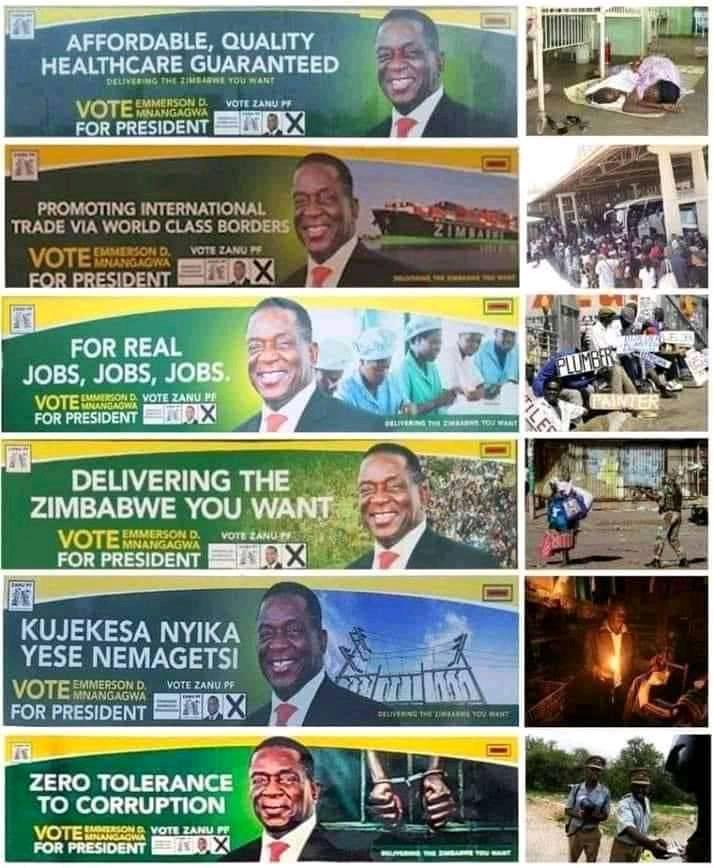 Mnangagwa is recruiting Zimbabwean social media celebrities and well-known men of God in a bid to acquire many votes for the upcoming 2023 election. We have seen Madam Boss, Mai Titi, and also the controversial United Kingdom-based Prophet Eubert Angel. 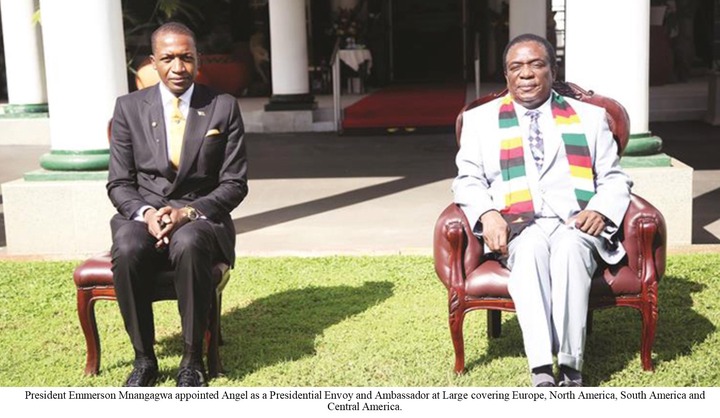 In March, President Emmerson Mnangagwa appointed Prophet Eubert Angel as presidential envoy and ambassador at large covering Europe and America. Given Prophet Eubert Angel's background, connection and influence it was indeed a positive move. Within a few weeks of Angel's appointment, he began to build a Hippodrome and Beethoven Hotel in Braeside. Is there not a reason why Mnangagwa is now surrounding himself with the popular men of the cloth? We all know the story about Eubert Angel car scandal allegations of the Bentley continental which I'm not gonna dive into as the allegations were far-fetched. It was reported by Nehanda Radio that Angel refused the USD$15,000 monthly salary for his ambassador at large role he said he was doing this for free for the love of his country. For that I applaud him. Angel unlike Passion Java is genuinely trying to make a difference in Zimbabwe . As for Java, he is in it for the money as he is now deputy president of the Affirmative Action Group (AAG).

Zimbabweans should go in their numbers to register to vote. As long as people don't take action, we will continue to see Java and his Zanu pf partners continue to abuse and loot the countries resources for personal gains.

Opinion: Here Are 3 Habits That Can Provoke God's Anger Upon You As A Christian

Which Girl Would Be The Mos Attractive When They Turn Around ? Learn What Your Choice Say About You

N1 got closed down last night, this is what was happening

A young lady posted her photos advertising her business but people noticed something else.

Video: Is This Really Possible? - Young Guy With Weird Ability To Rotate His Head Surfaces Online

What Zimbabwean court did to this gay couple, should be done in South Africa, and other countries