Why do rich people gets seats of honour in the church and everyone else seats on plastic chair? Opinion 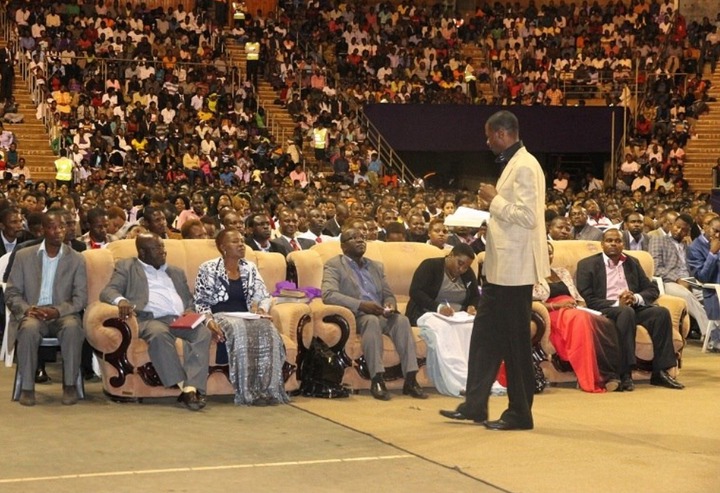 I have realised this with most of our churches, especially the Charismatic Movement, that the arrangement of sitting is very different. I know that Roman Catholic has got more influence in many churches, especially when it comes to the setup of the church, but in some Pentecostal and Charismatic Movement, the Catholic methodology has been kicked out, and most of these older churches even now the pastor sits on the same chair as the congregants.

If they are chairs of plastic, we all sit on the chairs of plastic, that include the Pastor and his wife. If they are benches, we all sit on benches, that also include the Pastor and his wife, but right now the setup has been changed. It is very different "pastors" they sit on sofas in church. Let alone the issue of them being welcomed or entering the church walking on a red carpets, that is the topic of another day.

We are talking of the sitting arrangements. They sit on a special sofas, and next to their sofas they will be a small table, that contains water, juice and other refreshments in case the man of God wnat a little bit of something to eat or drink.

I mean, are we still in the church, or are we in the entertainment industry? Is the church a holy ground or any entertainment ground? I mean for a man of God to sit on the same chair together with the congregants, it shows that he has got the spirit to serve. They must be nobody who must be given a position of honour, to a point where that person feels higher than everybody else.

Without the people, there is no church, the pastor should know that, his calling is irrelevant if those people are not there in the church, which means the people are as important as the pastor.

We should treat each other that way, there is nobody who should be too high for others. This kind of sitting arrangements, put pastors at a position where they feel like masters over the people of God, yet they are the ones who are supposed to be servants.

They don't just make this arrangement of sitting for pastors, they make it also with the people that have got money. Those that they know that, they bought the pastor cars, or they give a lot of money in the church. They're the ones that are behind most successful projects in the church that need money.

You find them that they also have their sofas, is sitting there in front with the man of God. Some of them, they are appointed to be the ones that are closer to the men of God that, when you want to talk to the man of God, you go through them. Men of god themselves when they see these people that are giving too much in the church, they get them closer to them.

My question is, does money pave a way for the seat of honour in the Church or your gift. Never mind the lifestyle that I live when I'm outside the church. It doesn't matter whether I drink, or I smoke, but because I've got money, whenever i come to church, I'm given that seat of honour. Do they not mind the my ways of living for me to sit next to the man of God? Should not the kind of lifestyle that I live count?

Others don't have money, but they interceding for that church, should they also not be honoured for that kind of service? I think what is qualifying people to sit in front, it is totally wrong. I don't know if God is pleased with that kind of sitting arrangement or that kind of promotion of getting closer to the man of God. I may be right, I may be wrong just comment and let me know what you think below.