When the Economic Freedom Fighters (EFF), descended at King Buyelekhaya Dalindyebo's Enkululekweni residence in Mthatha, a lot of eyebrows where raised as to what the purpose of the visit entailed. After holding a meeting with the King, it became clearer afterwards that the Red Berets brigade had gone there to persuade the king into swaying the minds of his subjects to vote for the EFF at the 1 November Municipal Polls. 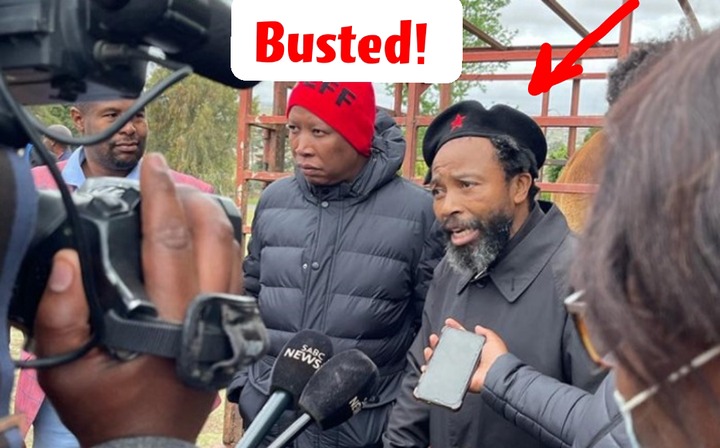 The EFF leader Julius 'El Commandante in Chief' Malema was quoted ipsissima verba indicating that the party had committed to purchasing a Mercedes Benz ML, quite a luxurianting automobile which retails at a whopping R1.8 Million.

It was that astronomical figure which left many South Africans in maniacal belwiderment, downright questioning why the party which claims to represent the interests of the poor could fork out a fortune to satiate King Dalindyebo's desire to own preposterous belonging. 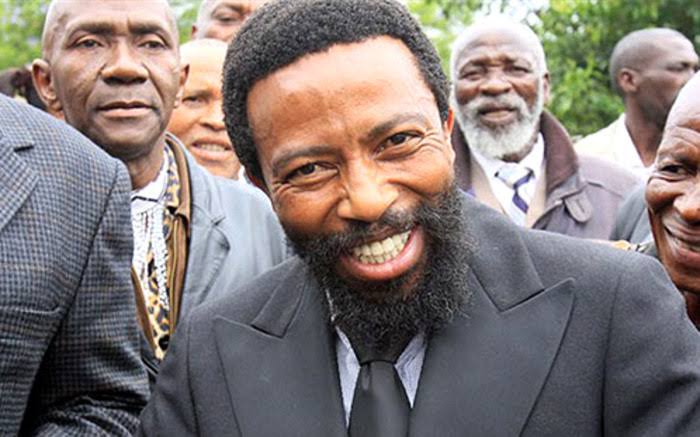 However, despite the King's conspicuous failure to sway his subjects into voting for the EFF, the party confirmed that it will again visit the king to organise a welcoming party for him, in reference to his return from jail just under 2 years ago. 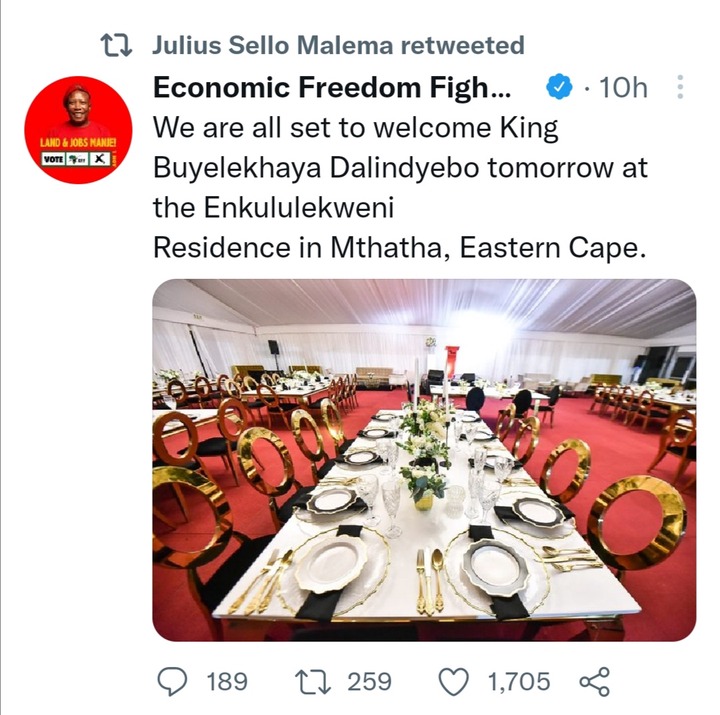 With the merriment all set to take place today, former Financial Mail journalist, Nick Hedley, had a different perspective to what unfolding before our eyes, as he took to micro-blogging site Twitter to express his views.

He posed quite an relevant question why people have looked past the EFF's R1.8 Million car gift as a 'bribe' for votes. 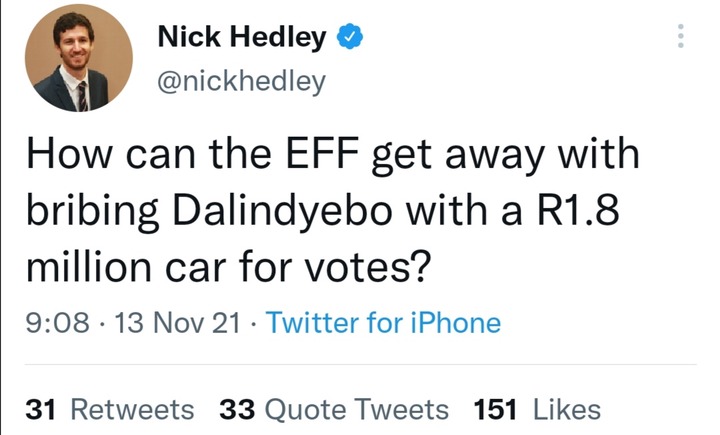 He just might ave a point, of course other political parties have always paid homage to Kings throughtout the country. It's a norm.

Nonetheless, one has never heard even the late King Goodwill Zwelithini professing his preference for any political party, that includes his cousin's Prince Mongusuthu Buthelezi's IFP. That sense was premised on the fact that royal houses had to always disassociate with politics. 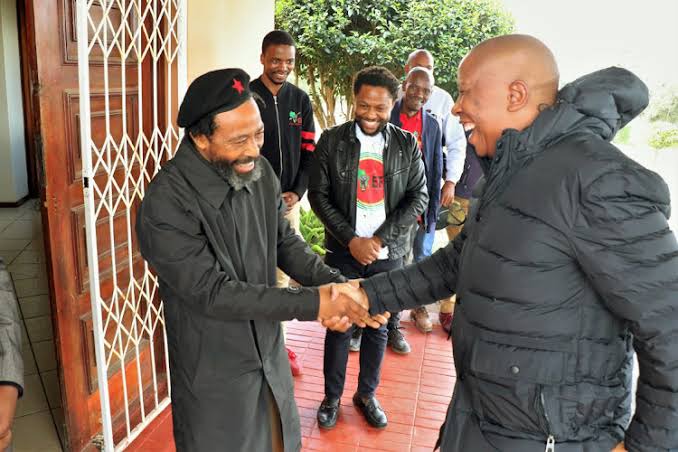 Coming back to Dalindyebo, he quite curiously didn't mince his words as to which party his party ought to have voted for, effectively demonstrating lack of impartiality.

Therefore, one shares Hedley's sentiments of some underhanded tactics that might be going on between this newly-formed alliance between the EFF and King Dalindyebo. 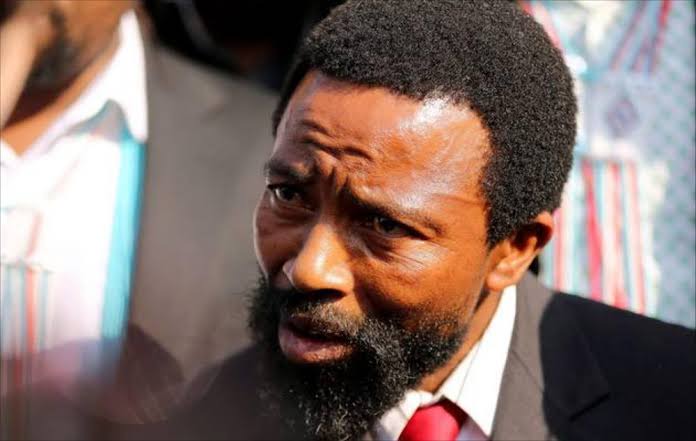 Below are some of facts about Dalindyebo:

- in 2005, he was indicted for fraud, kidnapping, attempted murder and arson, which eventually convicted and sentenced for 12 years. However, he was released on a presidential pardon barely a couple years into his sentence.

- in 2020, he was arrested after allegedly attempted to attack his son, Azenathi - who was an acting King - and his wife.

- Dalindyebo has 6 children, and one officially married wife, Queen Nocollege, but there was once speculation that he allegedly has 4 more wives. 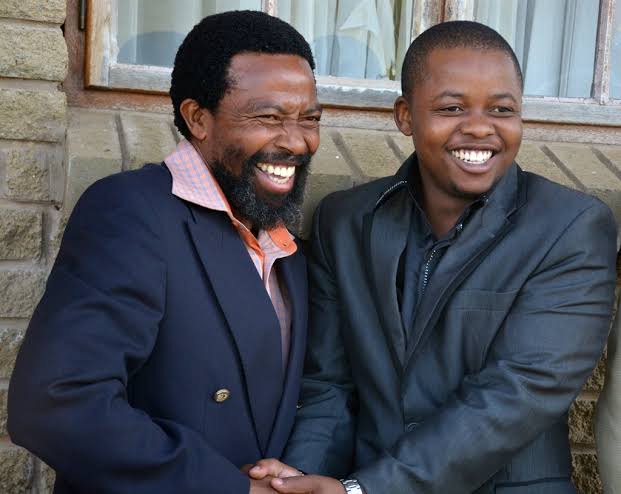 ﻿Do you view the EFF's car donation to King Dalindyebo as a possible bribe for votes? 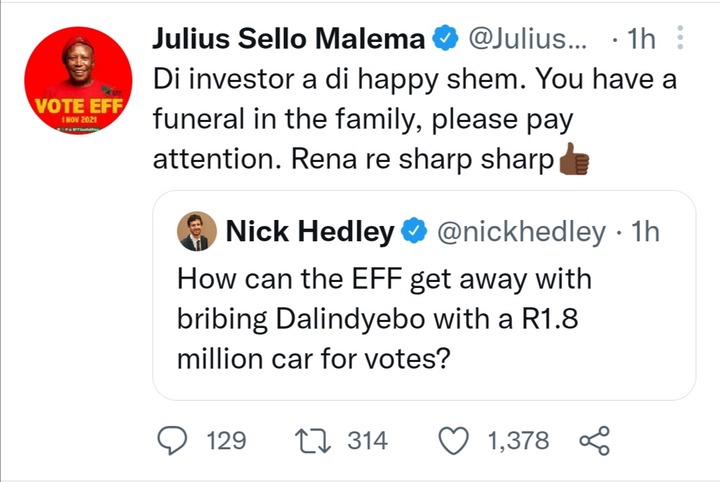 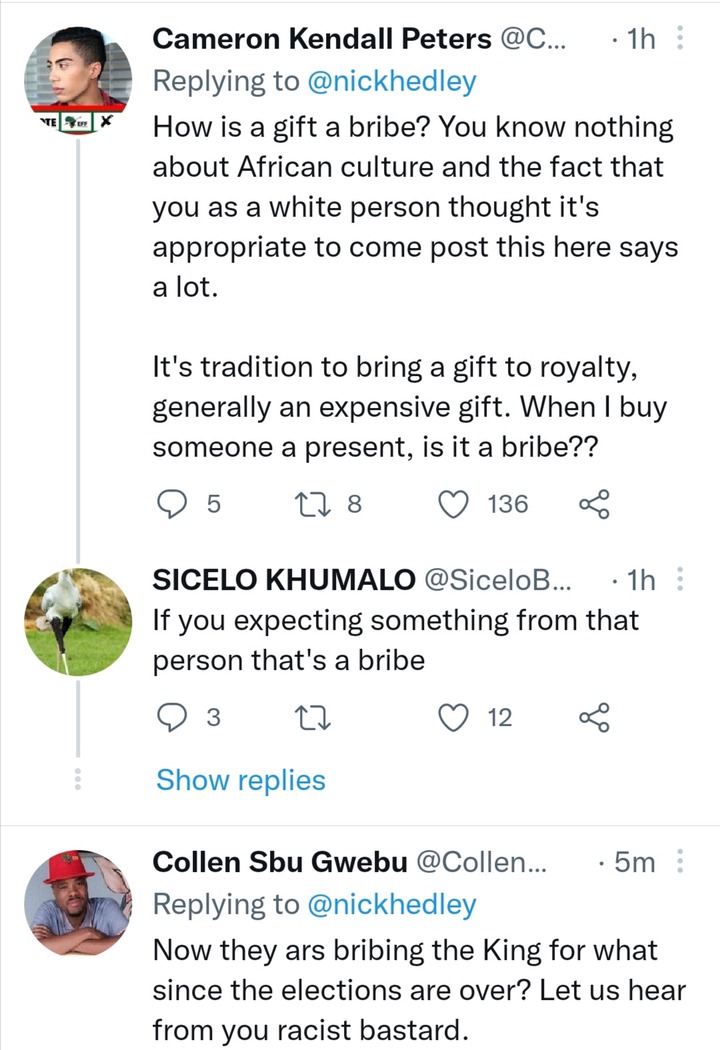 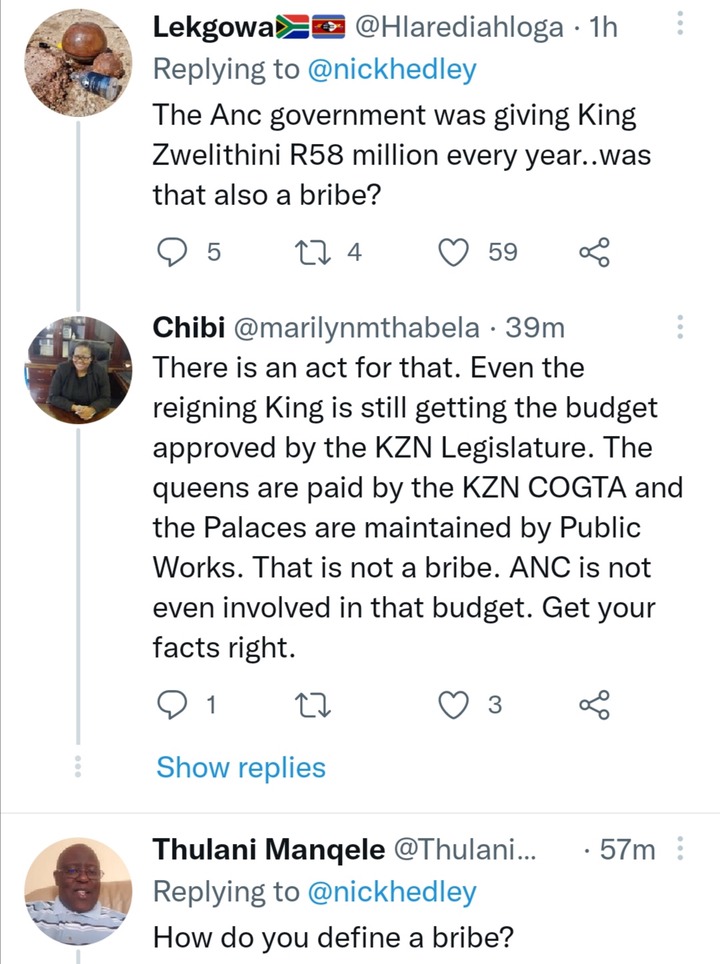 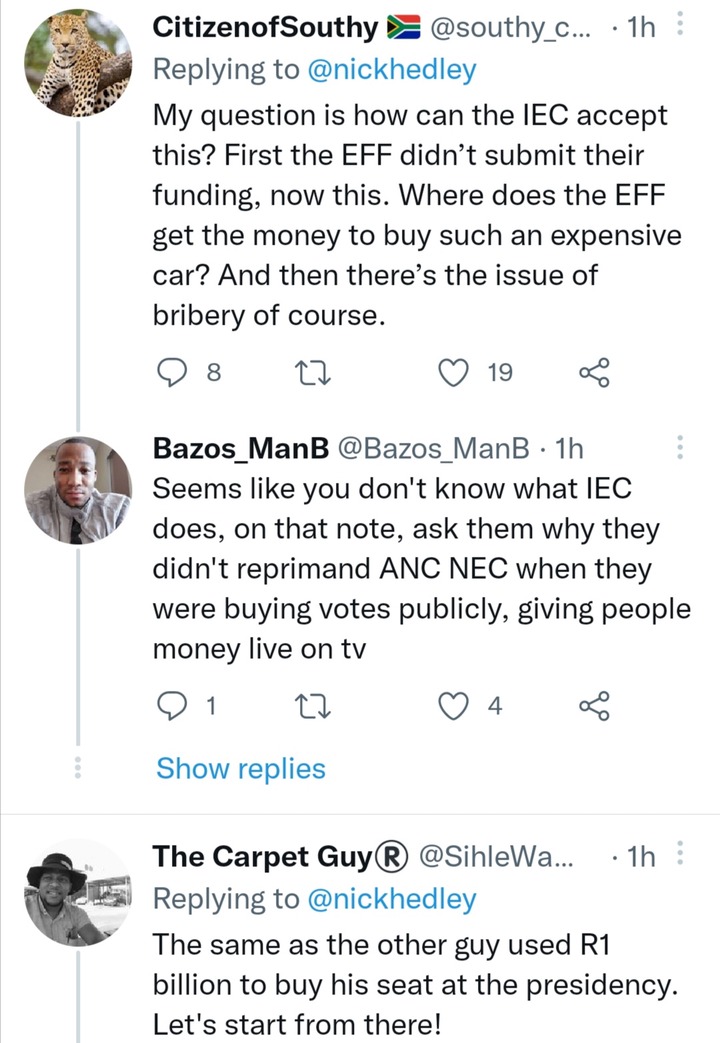 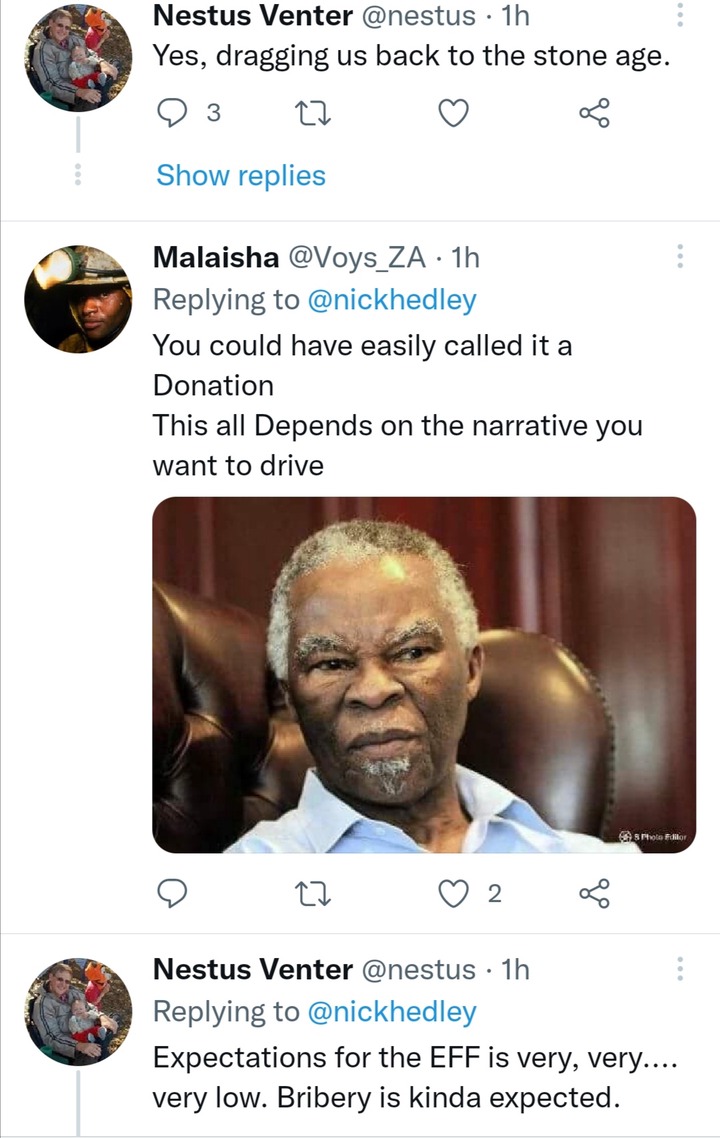 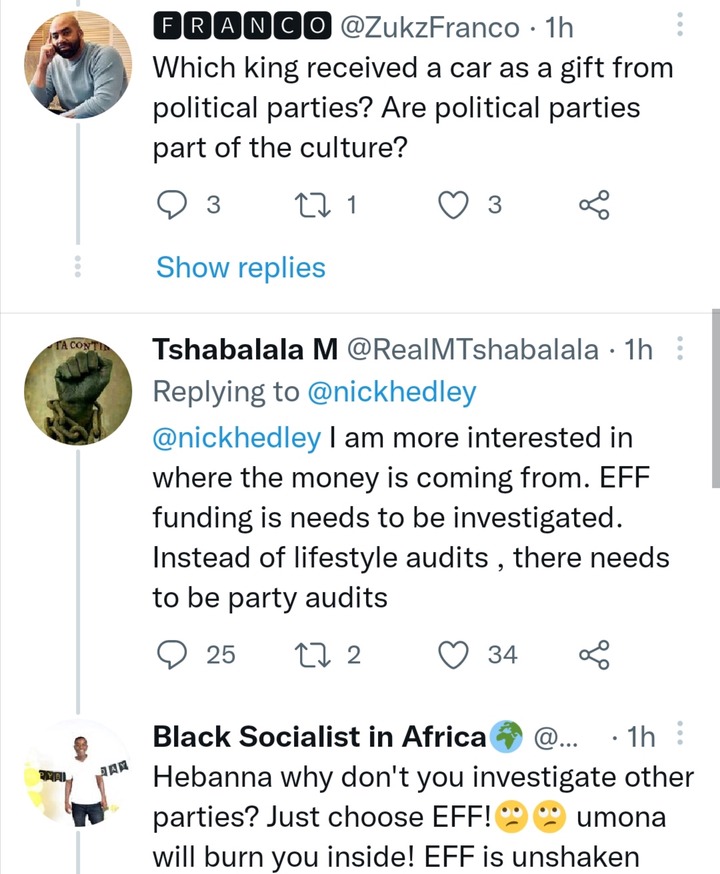 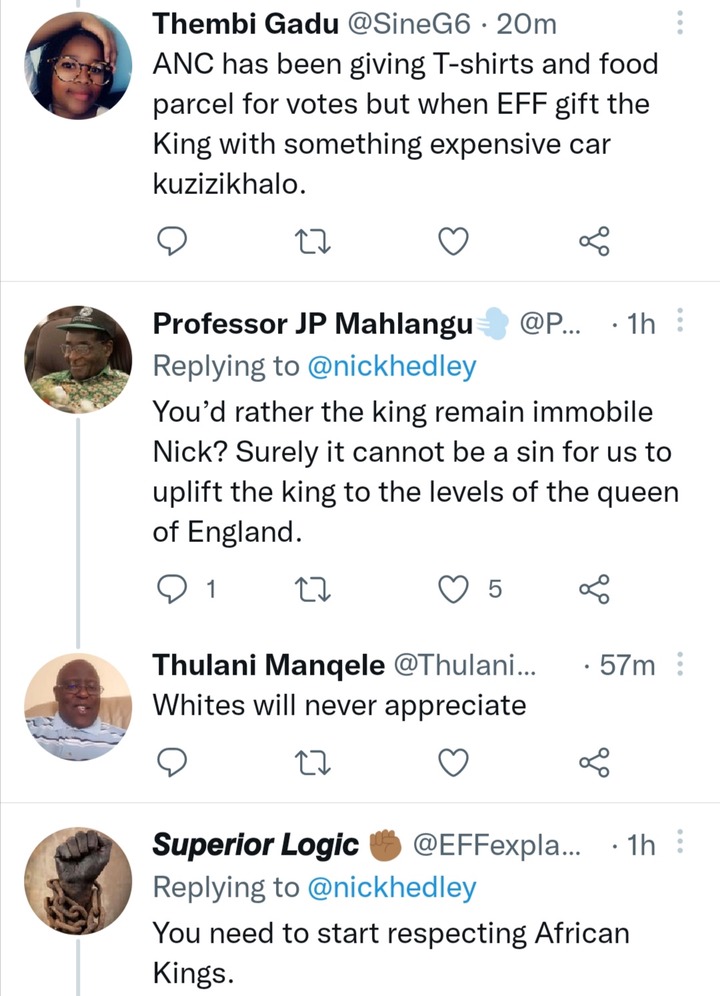