By Ecey (self media writer) | 3 months ago 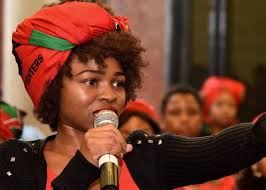 EFF MP Naledi Chirwa had tongues wagging on Tuesday when she responded to president Cyril Ramaphosa's weekly newsletter by labelling him a weak little boy.

Ramaphosa used this week's letter to share his thoughts on the recent fire that broke at parliament, part one of the state capture report and the fierce debate on the constitution sparked in the aftermath of tourism minister Lindiwe Sisulu's controversial opinion piece.

"We need to protect our constitution, our democratic state and the electoral process from anyone who wants to weaken our democracy and deny the SA people their hard won freedom". The letter read.

Then Naledi Chirwa launched a scathing attack on the president.

"You're such a weak little boy. All your fellow stooges you sent to collapse Lindiwe were collapsed themselves. It won't be surprising if u do what little boys do when overpowered by women. Throw the tantrum we are expecting it. You'll forever remain a toothless boy. Mfana ke mfana". Naledi said.

She made several allegations against Ramaphosa and said nothing would make her respect him.

Content created and supplied by: Ecey (via Opera News )