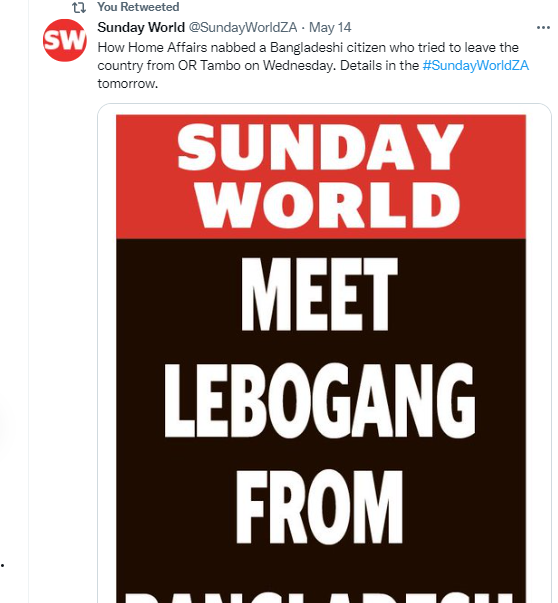 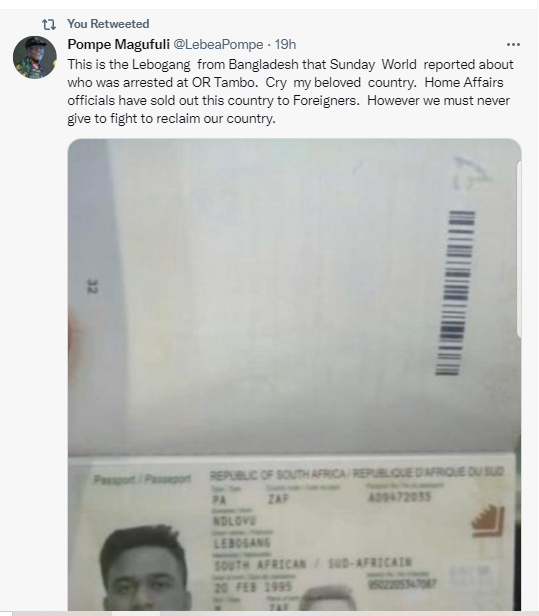 A citizen of Bangladesh was detained on Wednesday night at the OR Tambo International Airport as he attempted to leave the country using a fake South African passport. This incident occurred as part of an ongoing crackdown on the use of fraudulent South African documents and took place as part of the Pretoria operation.

"We have identified the corrupt home affairs official who was responsible for issuing this passport and the location where it was issued. According to Minister of Home Affairs Motsoaledi, another arrest is about to take place because the corrupt official who issued it is one of those who are currently under investigation by the department's counter corruption unit.

After conducting additional research, the agency came to the conclusion that the Bangladeshi national had submitted an asylum application in December 2015, but that his request was denied "because he is most certainly not in need of refuge." Since then, he has been attempting to overturn his conviction through South Africa's "complex" appeals process.

Motsoaledi brought attention to the fact that the Bangladeshi national was recently discovered to be in possession of a travel visa that was supposedly issued by the "Government of the People's Republic of Bangladesh" in the month of April. The significance of this is that a person seeking asylum is not eligible to receive any documents from their country of origin because they are presumed to have fled from that nation. Abuse of our country's asylum system is a major source of worry for the Department of Home Affairs (DHA).

"We will not grow weary or be discouraged in our campaign to remove corruption in all sectors of home affairs, regardless of whether it was committed by a South African or a foreign individual. "We are going to continue arresting each and every one of them," the minister stated. 26 of the 27 people who were arrested in March on suspicion of being a part of a syndicate that produced fraudulent passports and allegedly involved employees from the department of home affairs as well as Somalian nationals were released on bail on Thursday by the Krugersdorp Magistrate's Court.

The individual, a Pakistani national, who is thought to be the criminal mastermind behind the incidents was denied bail. The department considered the arrest of members of the syndicate to be a significant step forward and a huge achievement. 14 people from South Africa were among those detained, while the remaining suspects were from other countries. The 26 individuals were given bail in the amount of R2000 each, and the hearing was postponed until July 5th. At the time of the arrest, Captain Ndivhuwo Mulamu, the spokesperson for the Gauteng Hawks, stated that a total of R45,000 in cash as well as the vehicles that are thought to have been used by the syndicate had been discovered. 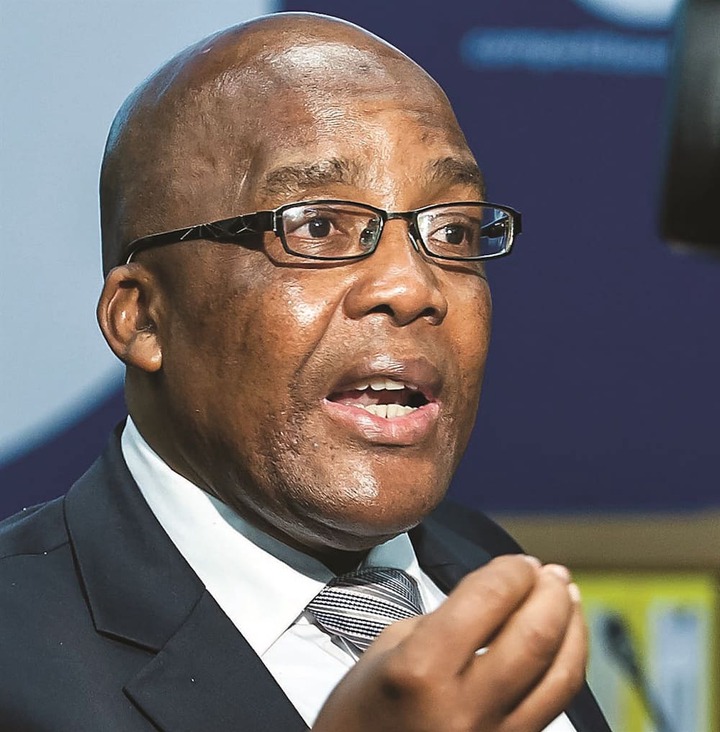 Motsoaledi said at the time of the arrest that the accused kingpin worked with people inside home affairs in a network that encompassed KwaZulu-Natal, the Eastern Cape, the Western Cape, Mpumalanga, and Limpopo. This network was responsible for trafficking drugs across the country. Two people who worked for the Department of Home Affairs have been arrested. Motsoaledi stated that he was anticipating the arrest of further officials. "We identified the kingpin when an immigration alert picked up abnormalities with two passports of people who sought to exit the country via Cape Town International Airport," the author writes. "The passports in question belonged to people who intended to escape the country via that airport." Motsoaledi stated that the officer in question had turned over the two individuals in question together with their passports to the police. 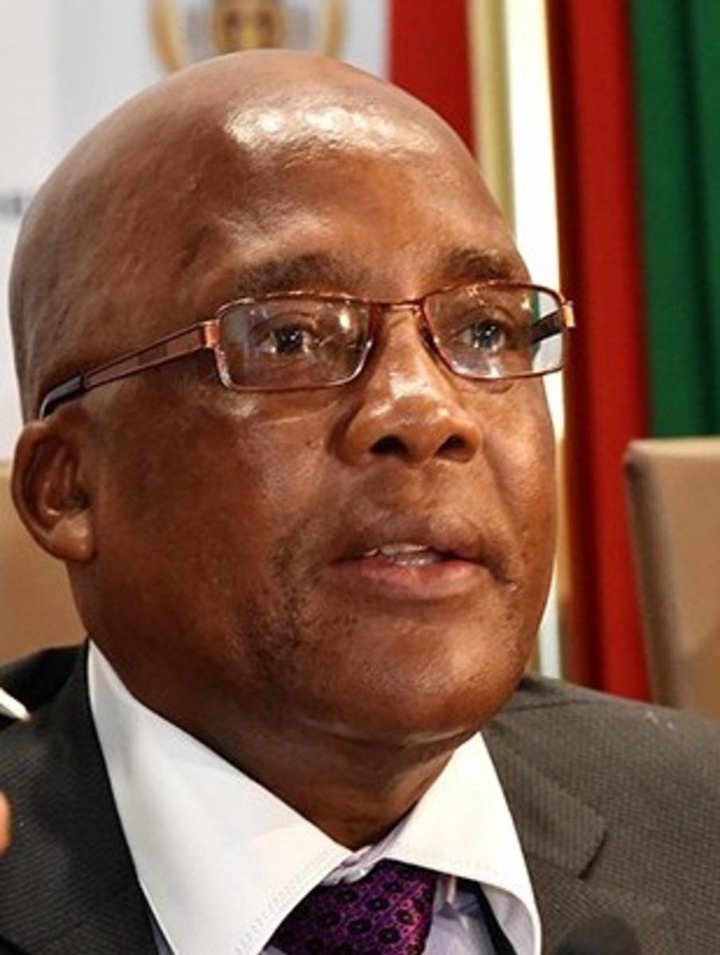 According to the allegations, the leader asked approximately R40,000 for a forged passport. It is reported that the two home affairs officials made between R5,000 and R10,000 for each passport. According to the minister, the head of the syndicate would obtain passports for non-citizens of the country who wished to acquire passports but did not meet the requirements to do so. After that, a runner would recruit South African individuals who had never before submitted an application for a passport. 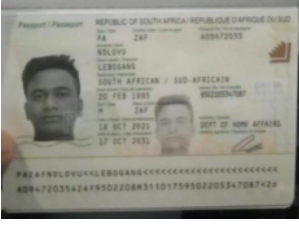 The officers in charge of domestic affairs, often known as "lieutenants," would make arrangements to acquire an office in which they could authenticate the documents. "According to the allegations, the kingpin purchased automobiles for his lieutenants, presumably so that they could be at his disposal at all hours of the day and night. That is to say, the lieutenants were always available to the kingpin whenever he need their services," Motsoaledi added at the time.

“This is the Lebogang  from Bangladesh that Sunday  World  reported about who was arrested at OR Tambo. Cry my beloved  country.  Home Affairs officials have sold out this country to Foreigners.  However, we must never give up fighting to reclaim our country.”