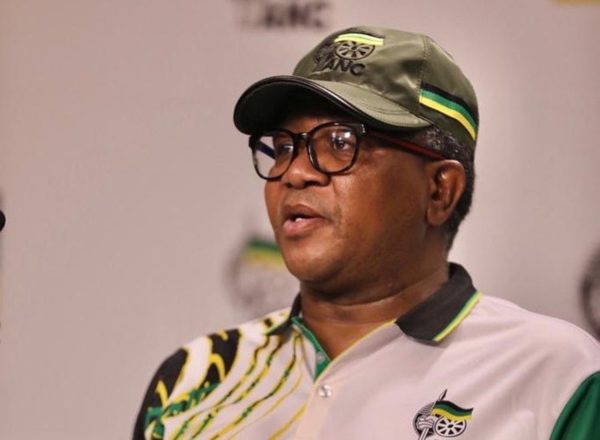 This after Malema, during his party's press instructions, blamed the ANC for just being keen on discussing districts and positions during alliance arrangements.

He said at that point: "I say to you we're eager to think twice about, one of the trade offs is the primary non-debatable cardinal column. The IFP says 'we concur with you on seizure of land, the issue is with pay, we need pay, you don't need pay'. That is a discussion we are having with the IFP. The ANC doesn't go there. [We asked them]: 'What is your situation on seizure of land?' [and they responded]: 'Leave those things. Which district do you need? Leave those things, we should discuss positions'."

Instructions the media on neighborhood government most recent improvements on Thursday evening, Mbalula said Malema deluded individuals on the grounds that the two gatherings just had two gatherings before the red berets canceled the exchanges.

"As the ANC we connected with various ideological groups to work with alliances or participations in hung districts. Among these gatherings incorporate IFP, PA, EFF, AIC, AL Jamah and UDM. These conversations were drawn nearer from a state of standard, great administration and favorable to helpless plan and against debasement rule," said Mbalula.

"A decent agreement arose in our conversations besides in the occurrence of EFF that decided to call of the commitment without strong reasons. We didn't examine with EFF the way to deal with districts and alliances. We just hear it since we were in a rush to examine alliances with them. We didn't arrive at that stage. We had two gatherings, and when we should get to the following gathering the EFF canceled the discussions and announced that they would not help the ANC."

Mbalula said while the EFF asserted the ANC would have rather not examine seizure of land by any means, Mbalula said that was not the situation.

"On the bending that we neglected to fulfill the needs, another ideological group can't force its pronouncement on another party, you arrange. Also, a portion of the things the EFF is putting on the table, we are conversing with one another with regards to them in parliament and we said to them 'we need to keep on drawing in' on the grounds that we have essential contrasts on their understanding of what should occur in the execution of land issue on the grounds that the thing that matters is between custodianship of land by the state, yet in general we consent to seizure.

"We settle on the state bank and a drug organization. On understudy obligation, it's anything but a matter you can basically settle on a choice without including Treasury. They needed us to settle on specific things inside a year and we said we would in our subsequent gathering and they were not content with our reaction saying it is ambiguous. We were unable to focus on things without checking out the guide and keeping in mind that we were doing that, they felt free to cancel the dealings. They were not prepared from the start to work with us and perhaps they needed a substitute while they're dumping the ANC for other ideological groups."

During another media instruction on Thursday evening, Malema guaranteed that his party upset an arrangement by President Cyril Ramaphosa and DA's Helen Zille to give draped metros to the decision party.

"We were aware of the arrangement that Cyril's ANC, helped by Helen Zille, should get a larger number of metros than what [former president Jacob] Zuma got [in 2016]. Then, at that point, Cyril should come out as the guardian angel of the ANC [and] as a brilliant arbitrator. We disturbed that arrangement," asserted Malema.

However, Mbalula said the decision party never talked about alliances with the DA in the current year's races.

"We didn't have any conversations with the DA, we had a decision to draw in with the DA since we and the DA have the larger part in the country as far as the majority of the districts. In any case, our NEC didn't command us to have an arrangement and alliance concurrence with the DA. The ANC has had alliances with the DA previously, however this time around, we didn't have any alliance understanding them."

"We have no doubts with anybody. We're not irate with either Malema or whoever. It's a majority rule government. He has the option to take his vote any place he needs to and give it to the DA, it is his right. We're not in contention with him concerning that, but rather we disagree with mutilations."

Malema is confusing our people, says Mbalula — The Citizen