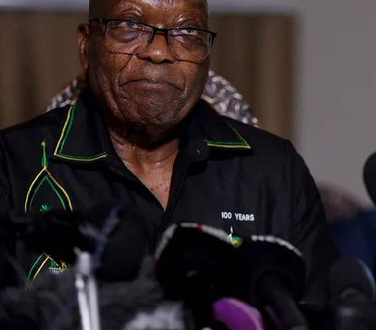 hile former president Jacob Zuma's daughter is being investigated in connection with the July unrest, she is not one of the 20 alleged instigators the Hawks arrested on Thursday.

Most of them are in jail. You just hate that she's being investigated. Hawks are sleeping on duty. They must just arrest her on suspicious of in sighting so that she spend a night in jail. Just for control. Are you listening to yourself? Arrest on suspicion? Law doesn't work like that. Kant what is an instigator?

Can you call her an instigator when she posted something that was already happening?

You right she definitely encouraged it though and got great pleasure out of seeing people's livelihoods being destroyed and not to mention what it did to our economy, traitorous behavior from someone whose father was president of the country.

Her brother should also be investigated.

'Whilst approaching December ANC Conference, you must arrest and instill fear among those who oppose you' it's allegedly message from handlers (WMC) of someone. Our country is slowly becoming a failed state—abuse of state resources for attainment of political ends.

These are our Queens, take your racism & go back to Europe Woman's Month. There is a serious case against the president, but u busy using state resources to fight children of this country. Hawks are a joke! But all those who collaborate with Cyril to merge our brothers and sister will pay the price, just pray that December doesn't come. How come she's not arrested because she was more vocal about encouraging people to destroy and burn shops than most of the people who appeared in court today? Her tweets are there as at first sight face evidence.

Someone said on Twitter that, It is obvious that she was one of the MAIN instigators. But will they ever arrest her? I bet not. It helps to be connected in SA. You can literarily get away with murder. Totally shocking. We don't see Cyril Ramaphosa in court, he's on record saying KZN people are tribalism and also instigated the killings of Blacks by Whites and Indians. It is a difficult one this one, especially if the NPA or Hawks don't have anything else besides they see you, then is a difficult case to convince a judge that she was instigating.

Public Protector: Progress being made in Phala Phala probe