By Technon (self media writer) | 19 days ago

The thing that makes lot of South Africans even more angry about foreigners and the opening of borders is that these issues are only spoken in South Africa and not in foreign countries which makes it seems like they only want to make foreigners come into the country at the expense of South Africans, a lot of African countries are actually securing their borders even more and implementing laws which makes it even more hard for foreigners to find employment and jobs, it is only scarce skills in which foreigners might be permitted into the country and even if they come into the country they are closely monitored and scrutinized and there every action and everything that they partake, which is something which should be, that's the way in which things should be in anything concerning foreign, but in South Africa such things don't happen foreigners come in as they want and they come out of the country.

The online post which was made by a South African who had visited Mozambique telks of experiences she had in the hand of the security forces in Mozambique and she said that the police are rude and they abused their rights and also demanded bribes. The people who all responded to the Post which was made also came out to speak of the experiences they had in Mozambique and countries which they had visited and they talked about how that they were abused by the security forces for no reason and they demanded bribes and accused them of things which they did which were false. The people also said that it is especially when you are a South African that you will have bad treatment in Mozambique in the hands of the police and it seems as if they hate South Africans in Mozambique. 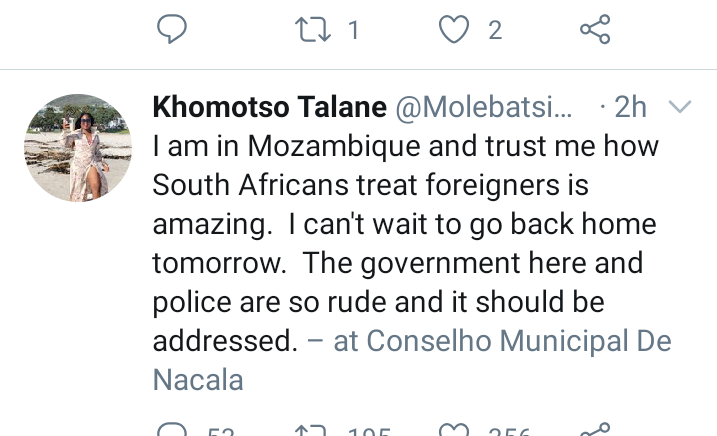