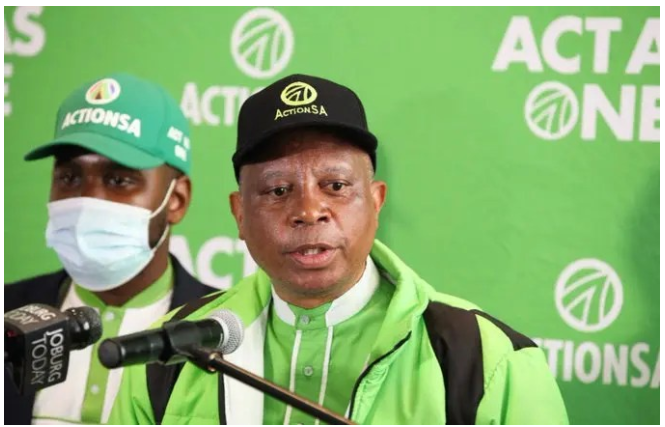 The meeting took place just a few days before Phalatse released the names of the members of her mayoral committee (MMC). The gathering hinted at the possibility of ActionSA members, including the party's head, Herman Mashaba, being appointed to Phalatse's executive committee.

It was unclear whether the DA had also approached the EFF or if the EFF had approached the DA. At the time of publication, the EFF had not responded to an inquiry on whether it would accept an offer from the DA for an executive position.

DA mayors and speakers were elected in Johannesburg, Tshwane, and Ekurhuleni, thanks to the assistance of ActionSA and the Economic Freedom Fighters, who willingly agreed to vote for the DA candidates in these cities. The DA was adamant in its opposition to any sort of alliance with the EFF and in its refusal to endorse Mashaba's election as mayor of Johannesburg.

Although Mashaba did not confirm it, he did disclose that the DA had reached out to the party's Gauteng provincial chairperson, John Moodey, and requested a meeting for tomorrow (Monday) afternoon. We've asked John to come to the meeting so that he may hear what DA has in mind for the future. "After the meeting, we'll wait to hear back from John," Mashaba stated.

Ahead of the establishment of municipal councils, Moodey was informed by the Democratic Alliance's negotiating team that they would not mind supporting Mashaba as mayor, but that they were opposed to his alliance with the EFF. Moodey was a lead negotiator for ActionSA during the coalition talks among political parties prior to the establishment of municipal councils. Moodey and his team members were taken aback by this because they had never considered Mashaba for the position of mayor.

The Citizen had previously inquired whether ActionSA would accept a position on the mayoral committee if one were offered by the DA in the three metros. Mashaba responded that they did not vote for the DA in order to receive positions in return, but rather to ensure that the ANC was ousted from government.

"Let me be clear about ActionSA's stance on this issue. We did not vote for the DA in order to corner them and force them to deal with us; rather, we voted for them in order to prevent the ANC from seizing control of these towns. "DA is under absolutely no duty to engage in negotiations with us," Mashaba stated.

He stated that the DA had "not made any contact up to this point" about what it intended to do in regards to the appointment of members of the mayoral committee, nor had it indicated whether or not ActionSA would be included in the appointments process. In his statement, Mashaba stated that "ActionSA is content with our existing position as members of the opposition."

Earlier, Mashaba expressed opposition to Phalatse's planned maiden and acceptance speech, which is slated to take place on Thursday. In response to Phalatse's appointment to the hot seat on Monday, council speaker Da Gama has summoned a special council meeting for Thursday, December 2nd, at which she will deliver her speech, which Mashaba has vehemently opposed.

For the express purpose of making a speech, a Special Council Meeting should be called at tremendous expense to the residents. This is both foolish and fiscally irresponsible." In view of the fact that a second Council meeting is set on 09 December 2021, which is exactly one week later," Mashaba says, "this is especially true."

It was in a letter to Da Gama that he expressed his displeasure with the misuse of scarce public resources and stated that "it is we political leaders who must set an example of effective financial administration." "We must make every effort to make the most efficient use of the few public money that are available to us." "The era of waste has come to an end," Mashaba declared.

Residents cannot be expected to endure with government as it struggles to offer services due to a lack of resources, only to turn around and waste those same resources at the first opportunity, as public officials. "It will not be tolerated by ActionSA," he stated.

In accordance with Mashaba, the council unanimously resolved at its inaugural meeting to postpone the address until its next meeting. Because councillors needed to depart the initial meeting venue on time in order to avoid falling foul of the impending curfew on the night of the Mayor's election, the meeting was canceled.

"A reasonable person would not have taken the agreement as implying that a Special Meeting should be held," says the author. According to Mashaba, "there is no urgency necessity for the speech to be delivered at a costly special meeting."

This is the first oversight responsibility for the new party, which Mashaba founded after resigning from the Democratic Alliance (DA) late last year in protest at Helen Zille's appointment as the party's federal council chair. While serving as mayor, Mashaba fell out of favor with the ANC, who took issue with his close ties to the EFF during his tenure as mayor and accused him of being influenced by the Red Berets. They were philosophically diametrically opposed to one another, with the former advocating free market capitalism and the latter a socialist party working for the dictatorship of the proletariat, respectively.