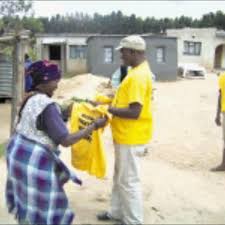 Since President Cyril Ramaphosa granted political parties permission to hold rallies in preparation for the 2018 local government elections, it has been one month since the president gave his approval. As a result, political parties are given the opportunity to perpetuate their lies about the dawning of a new South African epoch at this particular time of year.

It has long been standard practice for the ruling party to scare South Africans away from voting for the party that has often failed to deliver services. It is no secret that the time has come for people to make a decision about which political party to support in order to determine whether or not the party will deliver what the people desire when they vote.

David Mabuza is taken aback when the woman in the photograph refuses to accept the ANC t-shirt as a bribe, despite the fact that this is what they usually do. When the people of Newcastle, in Osivuwa, showed David Mabuza their true colors and how damaged they are when they are offered ANC T-shirts instead of the service delivery they preach everytime they cry up their problems, David Mabuza was taken aback and in disbelief by what he saw and heard.

This could imply that they have now become aware of the ruling party's election-winning techniques as well as its plans to loot state funds for their own personal benefit.

It is possible to argue that the African National Congress is cursed because the majority of their techniques are not working in their favor at the present time. The reason for this is that folks have regained their faculties and are experiencing something new and unexpected. This is due to the fact that a new dawn will break in the country, and the people of South Africa will have the opportunity to vote for the party that cares about them rather than the party that fails to recognize their needs.

Which of the following is your point of view, and why?