Level 1 because it is election time? Anele Mdoda causes a stir after this tweet, see here

As most people are aware yesterday's the President of South Africa Cyril Ramaphosa spoke. He was addressing the Nation in terms of where we are when it comes to the pandemic. What caught people's attention was how he basically mentioned that the country will be moving to a lower level. Ramaphosa mentioned that from the beginning of October the country will have to adhere to level 1 lockdown rules.

However people are questioning the announcement as it is election time. Amongst those people was Anele Mdoda who took to twitter her assumption. She publicly expressed how she thinks election had an effect on the level we are currently in.

Basically according to most people it seems due to the upcoming elections, Mzansi had to be on a lower level with limited restrictions. People had a lot to say in response to Anele's tweet. See people's reactions down below;

Whatever their reasons I do not mind, but why do we still have curfew? What purpose does it really serve?.

"It seems like most people are only starting to see it now, even with the level 2 it was a political move. Why are people not surprised that while there are intended restriction plans on unvaccinated people in several activities, the same has not been mentioned with voting." 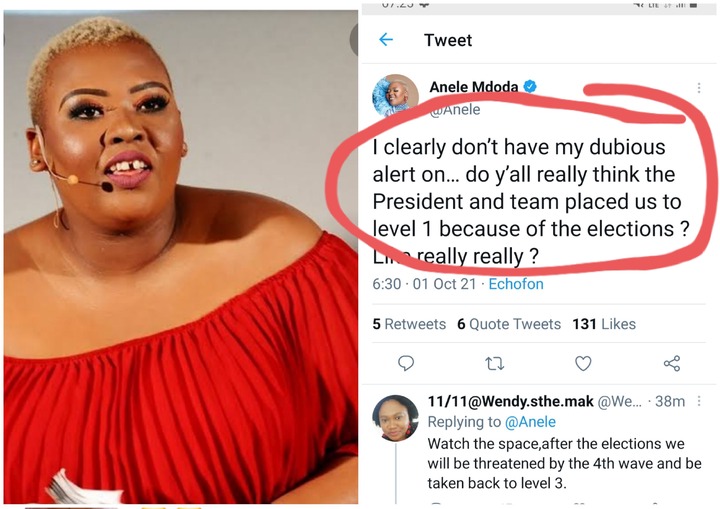