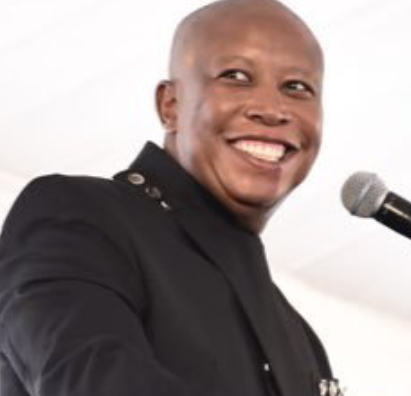 Julius Malema posing for pictures at a social event, and Gayton Mckenzie in overalls and creating jefobs in Central Karoo. Clear difference on which politician loves his people and which one loves a luxurious lifestyle more. Okay, let's do this. Seems some of you feel this is an unfair/unfounded comparison since Gayton is a mayor whereas Sello is not. Let's now be practical and compare them with what they both do while wearing what they both wear. Overalls. Is that fair enough for you?

So, you want Julius Malema to wear overall and do what exactly, he is the president of the EFF not a mayor and Gayton is a mayor he is doing what he is paid to do, I don't like nor trust Gayton but he is both a leader of a party, like Julius, AND a mayor. So, what's your point? The point is Gayton is getting a financial backing from the state to execute such programs whereas Julius is not. Gayton is doing his job as a mayor, isn't that too basic?

No. Gayton took on the responsibility of leading from the front & became a public servant even when his party didn’t have majority vote in that municipality. The other said he would rather not be a public servant. He is happy chowing donations & party membership fees. EFF is doing massive projects with membership fees, and another party is even failing to pay its workers.

Gayton is doing what mayors should does he understands his portfolio so compare him with other mayors. Gayton is a leader of a party smaller than the EFF. It more than fair to compare him with Julius. Point is, he raised his hand & took on the responsibility of fixing the mess the ANC & NP created. Juju had/has the opportunity to become a public servant and personally fix the mess.

Dude, being a politician is in the main driven by desire to do public duty. He can be a mayor, MEC or Minister. He can choose a portfolio where he feels he can make a chance. Unless he doesn’t have the competency. The President does not run the party; hence there is an EXCO. I want every capable politician to take on the responsibility to fix the mess created by ANC &NP, regardless of the party they are coming from. If they all leave it to the old age home and incompetent cadres. Isn’t that why they are in politics? To serve the masses?