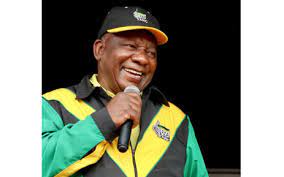 Angry Alexandra locals sought explanations from ANC President Cyril Ramaphosa on why they should vote for the party despite the fact that an allegedly unlawfully nominated candidate remains on the ballot list.

On Monday afternoon, Ramaphosa paid a visit to Alexandra after a day of campaigning in Johannesburg.

During his visit to the township, he was questioned about a candidate who was supposedly not chosen by the community but made the ANC candidate list.

Deborah Fraser was accused by residents of illegally parachuting her name as their ward 108 representatives. She had served on the ward council for ten years, and community members said that she did not receive more votes than Keith Nthite, the guy for whom they claimed to have voted.

Unlike in other places, where most of his address focused on service delivery, Ramaphosa spent the majority of his time outlining the party's stand on its nomination list to citizens.

He pleaded with them, saying that the ANC was looking into allegations of fraudulently recruited candidates and that if they were found to be so after the elections, they would be removed.

Some locals in the crowd screamed "no" as he pleaded with them to listen, and his assurances were unconvincing.

The ANC's national executive committee decided that unlawfully installed ANC members will be removed. In contested wards, new by-elections would be held.

Despite the grievances, Ramaphosa appealed that supporters continue to vote for the ANC on November 1st. He predicted that the ANC would lose the ward if they did not vote for the party.

"People are expressing their dissatisfaction in a variety of ways, just as you are. We claim that the NEC has stated that even if persons were fraudulently nominated, they should vote for them since they are ANC members. There will be investigations. Kgalema Motlanthe will ensure that the matter is thoroughly probed.

"By saying 'no Keith, no vote,' you are effectively donating the ward. So, if we hand it over to others, Johannesburg will suffer and we will lose it," Ramaphosa added.

"We say embrace it and go vote in every location."

Unsatisfied with Ramaphosa's response, residents roared back in displeasure.

For the first time in 2021, the party permitted community people to participate in the nominating process.

The ANC's candidate nomination process has been beset by controversy, with regions filing complaints with the party alleging rigging.

The party stated that it would address the complaints received after the elections. Motlanthe, who is in charge of the ANC's elections committee, is looking into the concerns.