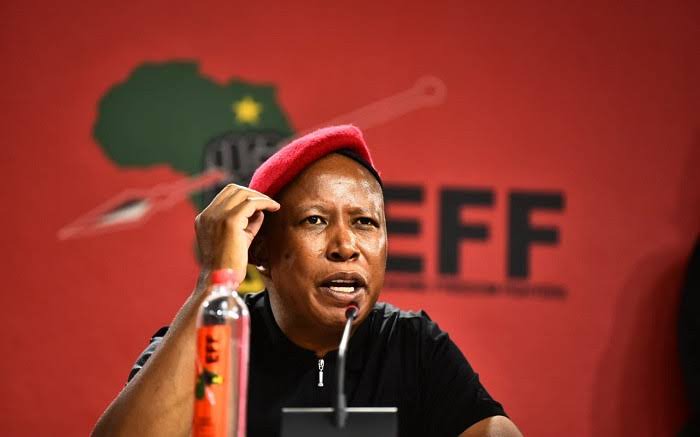 The head of the Economic Freedom Fighters, Julius Malema, has reaffirmed his group's position on foreigners, claiming that the phrase "foreigner" has anti-African connotations.

According to the EFF leader, colonialists erected the border to divide Africans, but looking back, there is no such thing as a foreigner when it comes to Africans because they are all of the same ethnicity, Africa. Since we all reside on the same continent, why do we label one another?

"To coexist with our African brothers, we must learn to do so. What do you mean when you say that foreign workers are taking your jobs? Don't be used to further an anti-African agenda. We are one thing that colonists separated, "added him.

Malema used the occasion to criticize Raymond Zondo's most recent State Capture Commission report, which was made public this week. He asserted that the study is biased towards black people and that he rejects it.

He declared, "We reject the Zondo Commission findings because it targets black people while advancing the interests of white industry."

The state capture commission was established to look into the connection between the Gupta family and the former president. The committee was only supposed to last six months, but it ended up going longer and covering more subjects. topics that no longer relate to them. Currently, it appears to be another ploy to rob the nation's tax payers blind.

Malema reaffirmed their support for the Commission's original mandate, saying that they wanted Zuma to be looked into while he was president. It would have been equivalent to spitting in the faces of South Africans by failing to look into him and demonstrating that they don't care what we think of them.

Black professionals and anybody who stood in the way of whites were the targets of the Zondo Commission. All we sought was an investigation into the connection between Zuma and the Gupta, but Zondo has targeted black professionals like Siyabonga Gama.

Malema clarified that the EFF is the only party that doesn't accept payments from White Monopoly Capital, in contrast to what the EFF's detractors have been claiming about the organization. "The only group not sleeping with whites."

Dudu Zuma Tipped Off About Her Arrest? See This