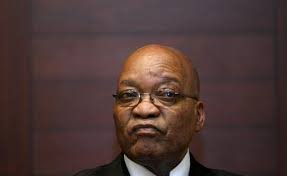 Former President Jacob Zuma alleges that those who will not vote in the local government elections risk reducing the ANC to a small organization that can only govern through coalitions.

Zuma addressed his supporters through a video call at a prayer meeting held in Durban on Thursday.

In his speech, he took aim at independent candidates who are campaigning for positions in their communities and their supporters, saying they are helping the "enemies" weaken the ANC.

"By so doing, you are taking the ANC away from power and encouraging other forces to come in. Which party can help us to change SA? With what policies? The ANC is the only organization with clear policies to change this country and it must remain in power. It must grow to be bigger so it can achieve its objectives". Said Zuma.

He said campaigning against the ruling party will "deprive" most South Africans of their needs.

He called on South Africans to raise their grievances with the ANC in a constructive manner without seeking to remove it from governance.

"Members who break away to stand as independent candidates or support other parties make a strategic and dangerous mistake because of temporary frustrations, anger and disillusionment". He said.

Earlier this month, the JG Zuma Foundation shared a video of former President asking people to vote for the ANC.

"Let's all stand up and vote - and vote more especially for the organization that brought us freedom, the ANC". He said.

Zuma is out on medical parole after his incarceration at the Estcourt Correctional Services Centre in July. He was sentenced to 15-months behind bars after being found guilty of contempt of court for failure to comply with an order to appear before the State Capture Commission of Inquiry.

The eThekwini Municipality Has Just Cautioned The Public

Maluleke Has Just Issued A Serious Warning To The Public.

If you do this every night your face will look younger

No vaccination certificate, no entry at university of Venda

All Alcohol drinkers must participate in this before 20th of December or this will happen.

Good news for HIV positive people, as this is to happen