South Africa Voted No On A UN Resolution Suspending Russia's Membership In The Human Rights Council.

By Emhlabeni_Daily_News (self media writer) | 2 months ago

This Photo has been capturing the attention of a large number of people across all social media platforms, including the Facebook App. 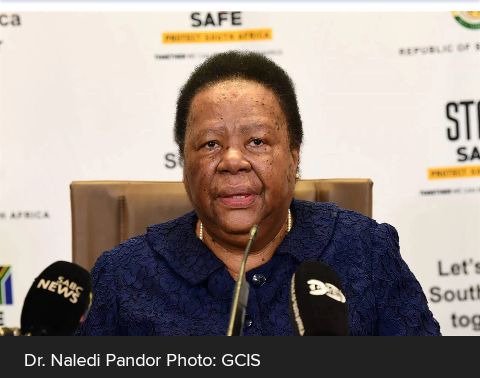 Minister of International Relations and Cooperation Naledi Pandor expressed these comments to the media on Friday after the UN resolution was passed the day before.

Ninety-three countries voted in favor of suspending Russia from the Human Rights Council, with 24 voting against it and 58 abstaining. While South Africa refrained, Pandor stated that the government was not unconcerned with the suffering of Ukrainians during the conflict.

Cooperation Naledi Pandor stated that the government's UN stance did not imply that it condoned the war in Ukraine. In order to allow for discussion and peace, Pandor retained South Africa's non-aligned status.

The ongoing fighting, the loss of lives, and the deteriorating humanitarian situation are all extremely concerning to us.

South Africa does not condone Russia's assault on Ukraine, which it has labeled a violation of international law, despite refraining from voting at the United Nations General Assembly on a vote to suspend Russia from the Human Rights Council.

Our non-alignment does not imply that we support Russia's military operation in Ukraine, which is illegal under international law, according to the minister.

Pandor stated that, in accordance with the UN Charter, South Africa has always opposed infringement of member states' sovereignty and territorial integrity.

We have also condemned the humanitarian catastrophe caused by current military operations and asked for the immediate establishment of humanitarian corridors and the distribution of help to the civilian population, who, as is customary, bears the brunt of the suffering when violent conflict erupts.

Despite this, South Africa has abstained for the third time from voting on a UN resolution on the situation in Ukraine since Russia's incursion earlier this year.

The minister emphasized that the best way to settle the situation in Ukraine was through conversation, mediation, and diplomacy. Pandor also expressed alarm over the idea of suspending Russia from the Human Rights Council, stating that the more the country is marginalized, the worse the war crimes will get.

South Africa's stance, she added, was consistent with that of members of the Non-Aligned Movement (NAM), which was founded in 1961 when emerging countries in Africa and Asia pledged to maintain their independence in foreign policy.

Pandor also addressed what she perceived to be an imbalance in the way the UN was being used in the Ukraine conflict. She stated that the strategy used in the fight on

Kindly Express Your Thoughts On This Article

Content created and supplied by: Emhlabeni_Daily_News (via Opera News )

Another Important Municipal Building Was Spotted Burning In The Night

Good News For Sassa Beneficiaries After This Was Revealed To The Public.