A big thumbs up! To prevent the spread of Covid-19, a new thumb-marking system has been developed for next elections. 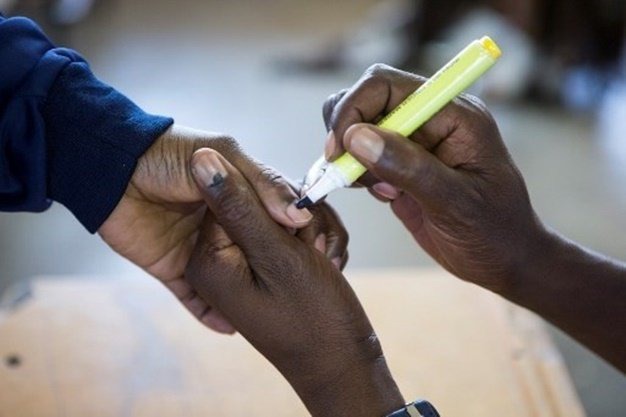 At a polling station, a voter has his finger inked.

At a polling station, a voter has his finger inked.

A liquid marker will replace the indelible ink marker pens that were previously used to mark voters' thumbs.

It will also be recommended that voters bring their own pens to mark their ballots.

These are part of a set of protocols designed to safeguard voters against Covid-19.

According to the Western Cape Electoral Commission of SA, traditional indelible ink marker pens will be substituted with a liquid that will be applied through the use of disposal buds on voting day to avoid the spread of Covid-19 (IEC).

At a media information session on Tuesday, provincial electoral officer Michael Hendrickse recommended voters to bring their own pens to mark their ballot papers.

Other rules implemented by the IEC for the 2020 by-elections, such as stringent social distance outside and within voting stations, forced mask-wearing, and hand-sanitizing upon entering, will be continued in the next municipal elections.

The municipal elections are set for November 1st, with 96 parties competing seats in the province and 53 in the City of Cape Town.

According to Hendrickse, the IEC was keeping an eye on regions classified as potential hotspots for unrest or other disruptions.

"We have a weekly meeting with the police in the run-up to the elections when we are advised on the places that we are monitoring for various reasons - for example, recent instances of taxi-related violence, gang-related violence, and service delivery protests - that may occur."

Connectivity stability is also one of the IEC's major challenges, according to Hendrickse.

"It will affect us if we do not have a stable network. Our voter management gadgets, on the other hand, may work offline as well "he stated The devices have been in use since 1998, replacing the "zip-zip" machines.

Blackouts are still a concern, despite Eskom's assurances that no loadshedding would be required in the near future, according to Hendrickse.

"It's not just about having lights in the voting booth. The entire ward is dark, which may have an impact on those who are engaging... When it comes to local government elections, voter turnout is always an issue - [this] is something that is seen all across the world."

Protests and conflicts over service delivery could be another stumbling block, he suggested.

"People will, understandably, use the elections to highlight their specific issues about service delivery. Obviously, they have the right to protest, but we want to make sure that such protests don't interfere with people's ability to vote."

He went on to say that the province's IEC was looking into the possibility of pop-up vaccination facilities at polling stations.

"It's not a must; people can choose whether or not to be [vaccinated]. But, because not everyone can visit to a certain vaccination station, we discovered that bringing the vaccination to the voter [as with the voter registration drive] gives them the option "he stated