Julius Malema, the Commander-in Chief of the Economic Freedom Fighters(EFF) has urged Swazis to intensify the struggle for democracy and overthrow King Mswati.

Speaking during the EFF’s 8th Anniversary celebration, the Commander in-Chief said as a political organization, they remained in solidarity with the people of eSwatini, he further commended the good work of EEF Swaziland in intensifying the struggle for democracy.

“We want to tell the EFF in eSwatini that they must continue with the good fight and that if they need any form of support they must not be scared to call for that support. The revolution does not have a formula, if you want to go the bush, we are prepared to support you”,said the EFF leader. 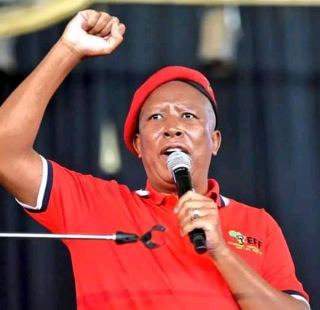 The Commander-in Chief further refuted claims that as the EFF they were providing guns to their comrades in eSwatini but clarified that they might consider doing so if the need arose.

Government Spokesperson had not responded to our questionnaire at the time of compiling this report.

Reached for comments, Nombulelo Motsa, the President of the EFF Swaziland welcomed the support from the Commander-in Chief adding that they will continue working hard to liberate Swazis.

”Actually, the Commander-in Chief and the entire EFF leadership have been supporting us it’s just that now they have made it know that they are supporting our struggle and we appreciate this. These words from the EFF leader will motivate us to work extra hard and intensify the struggle for democracy here in eSwatini” said the EFF Swaziland President.

King Mswati, an absolute Monarch with Executive, Judicial and Legislative powers is facing growing calls for democratic reforms from both inside and outside his Tinkhundla system. On Sunday, the police who were allegedly acting on King Mswati’s order arrested pro-democracy MPs Mthandeni Dube, and Bacede Mabuza for alleged terrorism charges, their bail application was postponed to Thursday 29th July 2021. The Suppression of Terrorism Act 2008 is normally used against human rights and political activists who are calling for democratic reforms.