Zuma demands Batohi get rid of Downer as his prosecutor amid looming trial date.

By Engineer_writer (self media writer) | 2 months ago

Zuma demands Batohi get rid of Downer as his prosecutor amid looming trial date.

Jacob Zuma's attorneys have written to the head of the prosecutions department, Shamila Batohi, requesting that she remove advocate Billy Downer from his role as lead corruption prosecutor, despite the fact that the trial is still several days away. 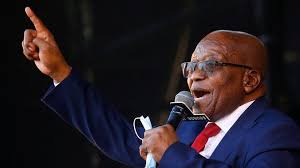 Former president Jacob Zuma greets his supporters outside the Pietermaritzburg High Court, where he had submitted a motion for a permanent stay of prosecution.

Despite the fact that the trial is still many days away, Jacob Zuma's attorneys have written to the head of the prosecutions department, Shamila Batohi, seeking that she remove advocate Billy Downer from his position as lead corruption prosecutor.

A seven-page letter sent to Batohi eight days before the Supreme Court of Appeal (SCA) dismissed Zuma's latest attempts to force Downer's removal through a so-called special plea, the Ntanga Nkuhlu Inc Attorneys complain that the prosecutor "has steadfastly failed and/or refused to step down despite numerous requests and demands for him to do so."

Zuma's lawyers allege that Downer is guilty of " unauthorised dissemination" of confidential information about Zuma's medical condition because National Prosecuting Authority (NPA) advocate Andrew Breitenbach agreed to a request from News24 to provide it with court papers filed by the defense and the state, among other things.

Content created and supplied by: Engineer_writer (via Opera News )