Kenny Kunene Is Not Scared of Malema, He sent This Strong Message To EFF

By Modumo (self media writer) | 2 months ago

Patriotic Alliance Deputy President Kenny Kunene says there is nothing wrong with the party wanting Member of Mayoral Committee position in coalition talks.

This follows after Malema called Kunene and Gayton McKenzie "Mapantiti" meaning Ex-convicts during his Presser.

The CIC revealed that he will not work with the two because they are from prison.

Watch the video of Malema calling them Mapantiti here

Today, Kunene was invited for a interview on ENCA news channel. During the show, he said that he will not let this go because Malema has stepped on his toes. 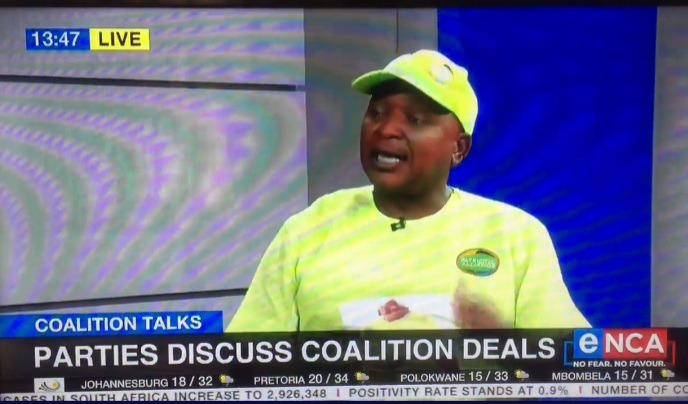 "We have stood back but now it is over and I am going to deal with it. Whenever I meet him, he will have to tell me that I am a Pantiti on my face," said Kunene.

The former secretary went on to explain that he will call the media and address all this other issues.

"after we are done with coalition talks, I will deal with this coakroach(reffering to Malema)."

The two parties has since been trending on Twitter. See the different reactions:

"Kenny Kunene says Julius Malema is a little cockroach and he is going to deal with him. South Africa politics is just full of drama. No solutions for Black poverty just fights, vibes and eating," said a user.

Dineo wrote: "Kenny Kunene and Malema public spat has been going on for years. In 2016 after the Local Government Elections Kenny was on Morning Live, he called Malema Judas sellout and challenged him on a public debate. Nothing happened and so we thought they buried the feud."

Meanwhile, Tuesday, 23 November is the last day local municipalities and metros can be established. If not, it gets complicated (more later).