ANC calls out ActionSA for banning the word ‘Comrade’ 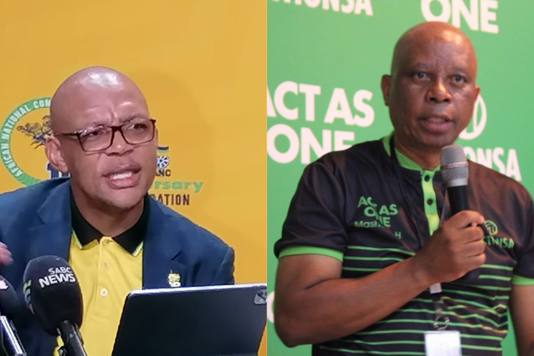 ANC calls out ActionSA for banning the word ‘Comrade’"/>The ANC has attacked ActionSA after the party disclosed that it had forbidden the use of the word "comrade" among its members.

Herman Mashaba, the leader of ActionSA, claimed earlier this week that party members call one another "actioners" rather than "comrades" since the latter term has taken on a new connotation in the nation and is now used to describe "thugs and thieves" who pretend as politicians.

"In ActionSA, the word "comrades" is forbidden. Thugs and thieves are comrades. If somebody addresses you as a comrade, you should decline since they only do so when they intend to corrupt you, Mashaba advised.

NIED BY ANC FOR 'POPULIST STUNT'

The ANC, whose members frequently address one another as "comrades," didn't take Herman Mashaba's comments well, but it said that it isn't wholly surprising.

The African National Congress is not shocked that ActionSA has forbidden its members from using the term "comrades" because it is obvious that ActionSA does not comprehend the true meaning of the word. The head of ActionSA's latest populist stunt serves to highlight the apparent fascist

must be deeply ingrained in ActionSA's political philosophy. A representative for the group, Pule Mabe, stated that the regrettable risk of populist maneuvers is their capacity to purposefully mislead society.

According to Mabe, the term "comrade" has been employed by progressive groups around the world for many years to imply a sense of solidarity, shared values, and commonality. The party resonates with these ideas.

The many true comrades in our movement who have opposed corruption, patronage, and state capture are greatly wronged by ActionSA's attempt to link the word "comrade" with "thugs and thieves." It is an insult to the dedicated cadres who have revealed wrongdoing in SOEs, municipalities, businesses, and other institutions, frequently at the considerable personal danger. It is an insult to the vast majority of ANC and Alliance members who vehemently oppose corruption in any form.

‘Not surprised’: ANC calls out actions for banning the word ‘Comrade’ (msn.com)

Money stolen from Phala-Phala farm is way less than what was said before, & see the animal bought

Twitter streets raised concerns about the lunch cooked and served by Dr. Muvenda