By LindaMbamboNews (self meida writer) | 1 months

OPINION: The Government Has A Money, The Problem is ANC And It Deployees In State. Give Workers Hike

Now it a time Public Unions put differences aside and face government head on who betrayed Public Servants Workers and hiding the truth yet lot of money counted wasteful expenditure and many irregularities in PPE scandal. The Tito Mboweni Serious about the State and cutting government expenditure why don't start from Parliament?

Can Minister Tito Mboweni and Minister Senzo Mchunu lead from the front and secrifies their previledges by asking the Speaker of Parliament to Cut their Blue light fleets and 50% of their benefits and other Cabinet Members? R30 is an insults to old valnerable pensioners who rely on same money to looked after their grand children's whos mothers are unemployed some died due to Hiv/Aids. This pensioners have no medical aids no credit cards only survive in this grant which is now cutted.

Ramaphosa Administration has brought many misfortunes since 2017 Nascrec ANC conference. Lot has been observed including cutting social spending and pumb money to SOE for what? Because these SOE has no role to play anymore in contributing to failing economy?

The poor coordination and political interference by those who claimed to be party loyal ending up using public purse in political battles cannot be ignored anymore. South Africa is not poor but the incompetent African National Congress Deployees who became millionaires because they forget the poor and the country but focus on strategies on how to loot the state.

Political interferences in State Owned Enterprises has clear indication that these ever bail out SOE are vehicles to promotes Looting and dodge deals by leading party Deployees. Shocking evidence reveals in the Zondo Commission painting grim picture of what really happening in the SOE and government department. This not ever ended in national offices but most municipalities are also under Distress and other are even under administration due to disfunctional and governance failures.

Now the Union demands are really genuine in principle and in this context because the fact of the matter there is money to loot and wasteful expenditure but there is no money to look after welfere of these public Servants. Worst ever happens the ANC presented Austirity budget which has deally heat hard most poor and valnerable group including Old Age headed household Beneficiaries. This tells you this government has no people at heart. 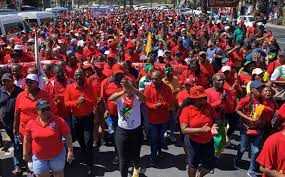 South Africa's public sector unions want a general salary rise of consumer inflation plus 4% for all workers, a document they presented to the government showed on Monday, as talks started on a pay bargain seen as key to assisting the public authority with containing its spiraling obligation.

The rundown of 16 demands, which incorporates better housing installments and a risk allowance of 12% of basic salary due to the COVID-19 pandemic, comes amid a court fight between the unions representing more than 1 million teachers, nurses and police and the state over salaries.

Public Services unions, including those from the COSATU league lined up with the overseeing African National Congress (ANC), have moved toward South Africa's most noteworthy court to attempt to constrain Public Treasury to pay the last tranche of the former three-year wage settlement struck in 2018. 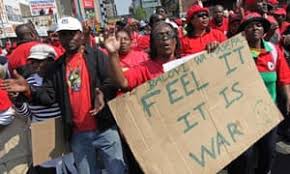 Laborers got their compensation climbs in the initial two years, yet Public Depository recoiled from paying around 37 billion rand for the last year beginning in April 2020, saying the last climb was exorbitant in the midst of the monetary decimation brought about by Coronavirus. 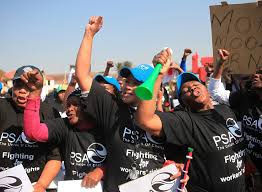 Government has capacity but ANC Deployees has failed the country dismal.

READ: Pain in his eyes, AKA attends his wife “Nelli Tembe” funeral service

The Husband Who Married Two Wives on the Same Day Finally Reveals Why, and the Wives Speak Out