Tables have turned: Pule Mabe is now part of the workers taking part in a march over unpaid salaries

The issue of the ANC and its workers not getting paid is a serious matter. The workers have been raising this issue for a number of times now and it has just came to a point were workers can't take it anymore. 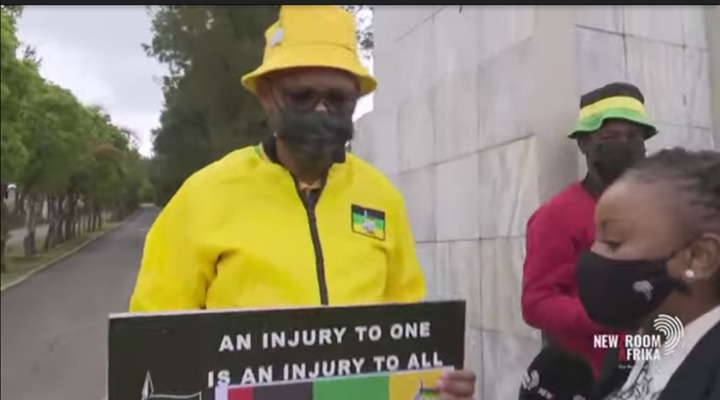 It was not long ago when workers were picketing outside Luthuli House and now they have taken their march to St Georges Hotel. This is were the ANC is having its NEC meeting. The workers want to ensure that they are being prioritized. For the longest time workers have been sacrificing for the party. They were able to go out and campaign for the party even though they were not paid but things just can't continue like this.

We are now seeing the likes of Pule Mabe who is the spokesperson of the ANC also joining the workers in their march demanding to be paid. It must be hard being a spokesperson of an organization that does not pay you. Pule Mabe was seen outside the ST Georges Hotel holding a poster as he stand in soliderity with the worker. Pule Mabe is also employed by the ANC, which means that if the workers does not get paid, the same applies to him. He also does not get paid. "I stand in solidarity with the workers. When they are not being paid, it means I am also not being paid. I am a worker of the ANC. I am supposed to earn my salary from the ANC every month"

People need to be payed so that they can meet their monthly obligation. It is the festive season now and there are so many things that are happening and you really can not do much when you are not being paid.

But just ouy of curiosity, how is the ANC able to continue having meeting at a Hotel when they can not afford to pay their staff? They should just have the NEC meetings at Luthuli House and save on costs so that they can be able to pay their workers. This issue is now getting out of hands.

Kelly Khumalo silences Jub-Jub once and for all

Mzansi People Are Starting To Be More Concerned About The Vaccines

Man Finds An Unknown Horrible Creature In His House, And This Is What He Decides To Do With It