By Technon (self media writer) | 29 days ago

The of illegal foreigners by locals is getting more and more bad and could result in bad results. The foreigners mostly blacks fleeing the economic situations are been accused of stealing jobs and occupying most of the jobs which are not entitled in the constitution to permit entrance into the country, semi-skilled and skilled and entry level jobs, they are accused colonising the local economy such as small businesses, and spaza shops and townships which were ideas and businesses of black local South Africans who lived in poverty because of the situation brought to by the apartheid regime. But people seems to have had enough of foreigners, also being accused of committing crimes from car hijackings, selling of drugs and human trafficking hijacking buildings etc. The online social media is flooded with keyboard warriors, South Africans are requesting for the deportation of illegal foreign nationals but illegal foreign nationals, legal foreigners and a number of local South Africans are against the deportation of illegal immigrants with the idea of one Africa, one continent, no africa is a foreigner in africa. However it seems that it is only in South Africa that such things are said meanwhile African countries are actually implementing more and more laws which makes it even more harder and tougher for foreigners to work. However it seems in South Africa they want a boarderless country where everybody can come in and leave as they want and this has now angered South Africans that says that they are Patriots and even if being named xenophobic, they say xenophobia is patriotism and it is actually a strategy of illegal foreigners and people benefiting from the exploitation of foreigners to blackmail them by saying that they are xenophobic meanwhile they are just wanting the implementation of immigration law which are and listed in the constitution. The locals have been angered against such disobedience to the law of immigration and the economic situations that they are facing because of the influx of foreigners, there's been several attacks against foreigners years back. 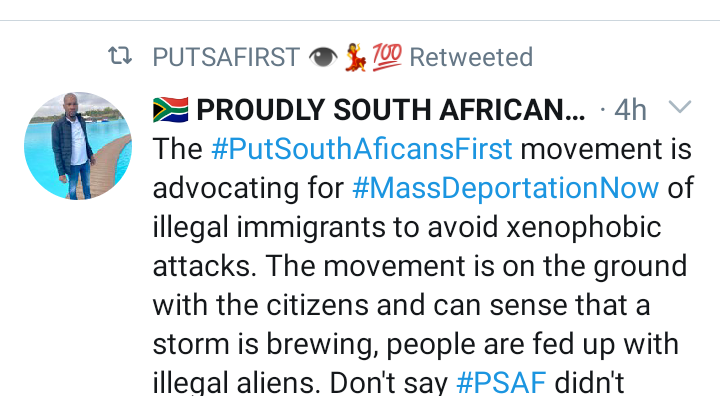 The post is warning against the failure of implementation of immigration laws which is subjecting South Africans to bad economic situation and which might cause violence against foreigners, and as it is been, the authorities are the ones failing in this regard in implementing the laws and following the laws but are corrupt and show signs of poor governance, violence has been in South Africa and burning of buildings, blocking of roads because of the authorities failure of provision of basic services such as water electricity. The failure is with the Authorities in charge.

Cut a lemon in 4, add some salt, place in the kitchen and see the results

Opinion|| Fear of losing jobs and more lockdowns has motivated people to get vaccinated not Omicron.