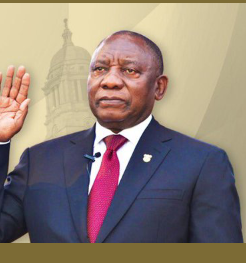 ven if Cyril Ramaphosa was summoned to go to Marikana, he would almost certainly decline. For, the president seems far more comfortable extending a palm of goodwill to white South Africans than reaching out a hand of compassion to black South Africans. Zuma is still alive, he was the president, and should be extending a compassionate hand. Then he should Never have promised. Politicians are Liars, and we all know that, but Ramaphosa is Worse. He Lies on Public Platforms, and that makes him the worst Liar of Politics. He promised, unprovoked @ the funeral of Winnie, that he will ask Malema to accompany him to apologize. Who was a President and deputy president during the Marikana massacre. Who was the minister and deputy minister of police during the Marikana massacre. The national commissioner and the DNC for policing. He must apologize after these people. It's actually white SAcn's who should extend palm of goodwill to black SAcn's than @CyrilRamaphosa. He did enough compassion work. Formation of the Union as well as immediate release of R500 billion for COVID-19 relief without running around. Why should he go there… so that he can get embarrassed.

He can rather go to the families of the 10. The Security guards. Police and the mine workers who got butchered by fellow miners before the shootings.

And he said to them, “Thus said the Lord, God of Israel: Let every man put his sword on his side, and go in and out from entrance to entrance throughout the camp, and let every man kill his brother, every man his companion, and every man his neighbor.

I feel disrespected and undermined when some white people become self-appointed spokesperson of blacks. Is so clear that she is trying her very best to push a narrative, if she had any sincerity she would also ask why zuma was never there to apologize. Nothing will change even if he goes to Marikana,

So I see no need for him to go there, instead he must visit the families of 10 people who were killed by mine workers. Marikana family victims were paid compensation for their loss by the state. You Muppets act like nothing has been done about this. JZuma was president at the time—he put someone without police or military experience into the position of police commissioner.