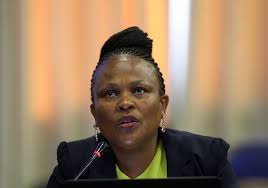 Busisiwe Mkhwebane, the public protector, has confirmed that she has received a complaint alleging that President Cyril Ramaphosa has broken the Executive Code of Ethics.

This is in connection to a leaked audio recording in which Ramaphosa allegedly suggested he was aware of unlawful use of public funds for ANC activities while speaking at a meeting of the ANC's national executive committee (NEC).

“The EMEA further provides that such an investigation must be completed within 30 days.”

The complaint was filed on Wednesday afternoon, according to Mkhwebane's office.

This came just a day after suspended ANC MP Mervyn Dirks testified before parliament's standing committee on public accounts (Scopa), asking the committee to "summon" Ramaphosa to account for his alleged remarks.

Dirks also said at the meeting that he will file a complaint with the public protector over Ramaphosa's alleged behavior.

“The fact that the president, having knowledge about the misuse of public funds, is definitely also in serious breach of the Ethics Code, and that this falls within the purview of the public protector, I have already addressed by having written a formal letter of complaint to the public protector,” he said at the time.

Dirks said he would also be writing to acting chief justice Raymond Zondo, in his capacity as head of the state capture commission, regarding Ramaphosa's failure to share his knowledge about the misuse of public funds with the commission.

“What President Ramaphosa stated in the audio clip is that he has knowledge about what is clearly the abuse/misappropriation of public funds,” Dirks said on Tuesday.

“We cannot beat about the bush about this — the misuse of public funds is an act of criminality. To put it simply, it is a crime.

“Furthermore, we all know that it is also illegal for anyone who is aware of such a crime not to report it to the authorities. In short, what the president admitted to is that he is committing a crime by not having reported this act of criminality that is known to him,” Dirks told Scopa.

“However, the president goes even further by trying to make this criminal conduct of his — to which he admits personally — seem virtuous by saying that he will rather fall on his sword than to report it.”

The fact that Ramaphosa spoke under oath before the state capture commission, according to Dirks, worsened the matter.

“This wilful act of criminal omission to my mind amounts to perjury,” he said.