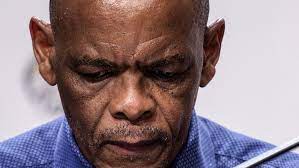 Johannesburg, South Africa- Ace Magashule, the suspended African National Congress secretary-general, has informed the Free State High Court that he objects to the corruption, fraud, and money laundering allegations against him.

On Tuesday, Magashule's attorney, Lawrence Hodes SC, informed Judge President Cagney Musi that his client will submit a formal challenge to the allegations against him in connection with an R255 million asbestos roof removal project granted during his time as Free State premier.

"The allegation contains a basic erroneous assumption. It is our position that this allegation does not come under the scope of the Prevention and Combating Corrupt Activities Act (Precca), "he said.

In the opinion of Hodes, Precca refers to a particular class of individuals, and accused number 13 (Magashule) does not belong to that group of individuals.

It is his belief that there is an irregularity in the charges that he intends to seek an objection to the accusations. Hodes also informed Judge Musi that he had requested

Johannesburg, South Africa- Ace Magashule, the suspended African National Congress secretary-general, has informed the Free State High Court that he objects to the corruption, fraud, and money laundering allegations against him. that the State name the witnesses who had implicated Magashule.

ADDITIONAL DETAILS ON THIS

Ace Magashule is getting ready to face charges.

The trial in the Ace Magashule corruption case has been postponed until November 3.

WATCH: Ace Magashule responds to Oscar Mabuyane's allegations that he plotted to have Hawks turn on him.

"We may review that question closer to the time of the trial," De Nysschen replied. Unfortunately, they will have to read through the whole docket. "I'll take it into consideration."

A pre-trial meeting was scheduled on November 3, and the issue was postponed until then.

Within minutes after leaving the courtroom, Magashule claimed that the case was "political" and that the prosecution had no witnesses or proof.

"We are hopeful that we will get a fair trial." In the box, I will be able to speak about some of the topics that I am not allowed to discuss publicly at this time," he added. "I am eager to go inside the box."

Magashule said that he and his 15 co-accused were entitled to get a copy of the witness list.

"I have never in my life been a part of corruption," he said emphatically. Also on November 1, he encouraged his followers to cast their ballots for the African National Congress (ANC) in local government elections.

The accusations against Magashule are detailed in the indictment, which includes allegations that he used his position as Free State premier to obtain more than R1.1 million in payments from late businessman Igo Mpambani, who was murdered in 2017.

According to the National Prosecuting Power, the payment amounted to an abuse of authority, breach of trust, and/or violation of his legal obligation or a set of norms, as well as a breach of trust.

Also at Magashule's request, Mpambani and Diamond Hill Trading 71 contributed R300 000 to Griffin Edge for the purchase of 200 electronic tablets, which were also purchased by Griffin Edge.

In addition, R250 000 was paid to Astra Travel to cover the costs of a delegation to Cuba, and a person named by prosecutors as SWC Nkate received R30 000 from Mpambani or his business at Magashule's request, according to the indictment.

While South Africans are getting R440 Child support, see what other Countries get. (Opinion)