We will never win the war against political corruption with the Hawks as long as they lack the modicum of independence required for that task. 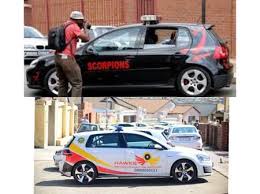 The Scorpions was created purposely to fight corruption because the ANC leadership had been worried about corruption in its ranks.

Leaders such as Joe Modise and Jacob Zuma had routinely stolen donor funds and swindled recruits that arrived in exile with pocket money. Joe Slovo warned that the ANC could degenerate into "a self-serving and self-perpetuating elite".

The Scorpions in the NPA was a unit of investigating prosecutors. A crack assemblage of detectives and prosecutors working together on priority cases, especially corruption.

Copied from the FBI and other jurisdictions, the Scorpions struck a body blow against high profile political corruption.

You see, the ANC doesn't like to be disturbed while eating. They accused the Scorpions of targeting especially ANC leaders and being used by Mbeki to settle political scores.

The first thing they did immediately after removing Mbeki is to amend the legislation, focusing on decoupling the police from the prosecution and repealing the body's independence.

They created the Hawks under the direct authority of the police minister. Hugh Glenister won a court order to remove the Hawks from political control.

It is a matter of huge disappointment that Ramaphosa has not even tried to reintroduce the Scorpions, even just to demonstrate political will to fight political corruption. It's going to be a long day

WHAT DO YOU THINK?? LET'S TALK IN THE COMMENTS