Johannesburg - The ANC and EFF are sending serious weapons toward the Western Cape with President Cyril Ramaphosa and red berets pioneer Julius Malema battling in the territory trying to slacken the hold the DA right now has. 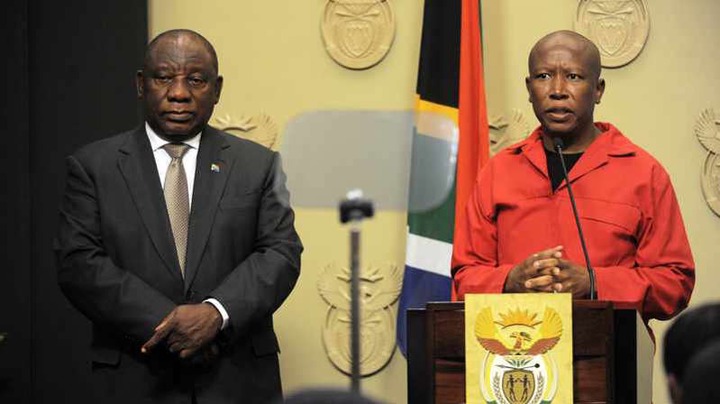 The president is set to make his first stop in Mamre on Thursday morning while Malema will be out campaigning along Stellenbosch.

Ramaphosa will lead local gatherings in Mfuleni and Khayelitsha.

Malema's three-day mission will take him to Khayamandi, Bellville, Nyanga, Khayelitsha and Kraaifontein.

The ANC in the territory has as of now clarified that the point of this metropolitan political decision is to wrestle their direction to the top. They say the DA-drove government has neglected to address the issues of poor people.

During the commonplace declaration dispatch, the party said the DA had shown total negligence for poor people, ignored networks in municipalities and towns, and left sewage going through the roads of Khayelitsha, Nyanga, Gugulethu, Delft and many pieces of the territory. The common party likewise said while the DA guaranteed the City of Cape Town was the best-run district, this had not been the image for the networks encompassing the princely regions that it had tried to support.

In its declaration, the EFF featured the breakdown of neighborhood government and districts in the country. Accentuation was put on districts not offering fundamental types of assistance like drinkable water, dependable power, disinfection and deny expulsion.

The breakdown, the EFF said, was because of an absence of vision for a reasonable nearby government; misalignment of capacities and distribution of assets; absence of abilities and specialized limit; defilement and botch of accounts; and maturing and underfunded framework.

EFF commonplace administrator Melikhaya Xego said for this present week the party had its sights set on significantly increasing its portrayal in the Cape metro, yet in addition showed that its arrangement for different districts in the region was to diminish the DA's greater part vote and push for hung regions.

Saying something regarding what the ANC and EFF desire to accomplish during the end of the week's battle field, political expert Professor Tinyiko Maluleke said it was improbable that the ANC would make strides.

"The ANC has been losing numbers reliably in the beyond two neighborhood government decisions in the Western Cape. The DA has been getting more grounded.

"I guess Malema is trusting that individuals displeased with both the ANC and the DA may cast a ballot their direction," Maluleke said.

He added that the Good party, driven by Patricia de Lille, will be the hardest contest against the DA, contrasted with the ANC and EFF.

"There's a great deal of feeling with regards to the DA and Good party. The inquiry will be which heading will these feelings head?

"I don't see De Lille contending with the ANC, I think she needs to go for the DA."

Good news for all sassa beneficiaries

Yes its cheap: Here is how much it cost to sail on this cruise ship from South Africa