DA was exposed Compare the two flags which color is missing?

since day one of freedom When the voting day is near lot of things happen Good and ban and lucky enough those things are noticed by Good people at the wrong time. Democratic Alliance (DA) Flag Couse lot of talking that some of black people take it with chests. The flag was compared with South African National Flaq and surly Something stranged was noticed and Every one was like wow it took me to see that so many years since the Democratic Alliance was founded by Hellen Zile I did not noticed that is was like a nightmare to every one on social media. Before we go furthermore when did you noticed that the Democratic Alliance flaq don't have black colors on it? That was what makes black people to raise their question high.

South African President Cyril Matamela Ramaphosa has, in terms of Section 2A of the Public Holidays Act of 1994, declared Monday, 1 November 2021 – the date for local government elections - as a public holiday throughout the country.

The laws are meant to been followed and that's what The President calls on all registered voters to use the opportunity of the public holiday to exercise their democratic right and civic duty by voting in this election that empowers citizens to elect new leadership and influence service delivery where they live.

We all know that it's all about fighting for the right Political party that will lead us to United. But many stranged things already heppen that raise lot of Question to many people. The flag of Democratic Alliance was compared with South Africa National Flaq and Black color wad noticed missing why no one know. 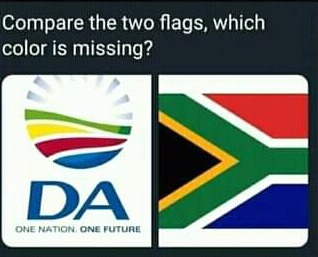