OPINION: Those Who Beneffited From JZ Are the Ones Seeing a Hero Out of Him

By WeDeliverRealNews (self media writer) | 1 year ago

I learned from 2006 towards Polokwane when we supported Cd Zuma. We were fed lot of lies about many comrades in our branch meetings, alliance meetings and SACP meetings about how Mbeki is an Askari selling the country, and whole lot of lies

We were not egile to verify all the stories because Zuma was our main man. Several years into Zuma presidency we realised that some where just lies to agitate us. We detroyed scorpions and formed Hawks and expected them to deal with those who were alleged, of using state resources

But nothing happened because obviously there was less truth about many gossips around Mbeki and his admin. In the next Zuma term we then saw new relationships emerging of Gupta family, doing work with state partnering with the president's son

Knowing before hand about who will be ministers and which portfolios. Allegations of Zuma making calls to GCS Ceo, to help the Guptas and Jonas alleging bribe meeting with Duduzane and Guptas

Zuma producing unverified (fake) intelligence report, to remove a minister of finance after he lied about why he sacked Nene regarding Brics bank post. Surely Zuma was on a mission and only the gullible and those benefitted from him are the ones seeing a hero out of him 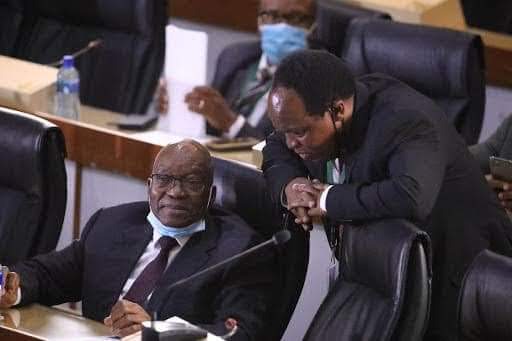 He has a skill to indocrinate and strive nuratives to steer away focus, from real issues through concepts like WMC vs RET when he has to personally account for his deeds. Many professionals and academic lost their statuses and images, because they were corrupted by the second term Zuma cash time administration

According to Zuma he is the only one who never sold this country. His predecessor (Mbeki) and successor (Ramaphosa) are the one sold it. Lets wake up and use our minds, the lesson is that lets fight ideologically and stop using lies against one another